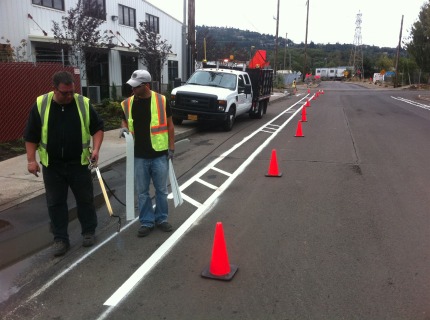 While the City of Portland cut the ribbon on a neighborhood greenway in North Portland last week, crews were laying down a new buffered bike lane way across town on SE 101st. A reader sent over some photos of the installation and I followed up with PBOT for the scoop. 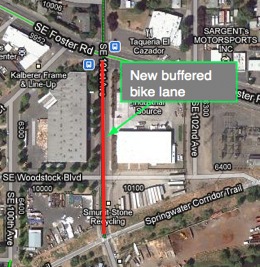 The new buffered bike lanes (on both sides of the street) consist of a six-foot wide bike lane with a two-foot buffer zone and it’s part of PBOT’s SE 100th/101st neighborhood greenway project. The new lane runs about a block from SE Foster to the entrance of the Springwater Corridor Trail. The SE 100th/101st bike boulevard project stretches from the Springwater Corridor Trail in the south up to Ed Benedict Park where it connects with the SE Bush neighborhood greenway.

In an email to neighbors about the new buffered bike lane, PBOT wrote that this stretch of SE 101st is, “home to many businesses operating large trucks and also provides an important connection for cyclists accessing the Springwater Trail.” PBOT project manager Kyle Chisek says to make room for the new bike lane, they used the existing “No Truck Parking” zone instead of altering lane widths.

Also according to Chisek, SE 101st is a popular connection to the Springwater Trail for students taking field trips on bikes from nearby Lents Elementary School.

Learn more about this and the 15 other active neighborhood greenway projects on PBOT’s website.

they need to come down a steep hill to a stop sign on Harold, then cross Harold, ride down narrow 101st (which barely has room for cars to pass each other abreast when other cars are parked along the street), cross Foster (which is never fun anywhere you cross with vehicles, especially at busy intersections like this one), and go 1.5 blocks to the Springwater… that’s about .8 miles on the street…

the better route is to go over the Steele Street pedestrian bridge next to the school without even needing to go on the street, and take the I-205 path to the Springwater… they’ll only need to worry about cars as they cross through a crosswalk at Harold where there are plenty of school and bike crossing warning signs… that’s about 25 feet on the street…

if you’re trying to teach bike street smarts to kids this is a decent route, but if you’re just taking a field trip to the Springwater then it’s not a good choice…

on another note, if they’re hoping to take the Greenway across Holgate at 100th or 101st they’ll need to put in a crosswalk light… it’s not fun to cross the street there as a family…

I really like these buffered bike lanes, just wish they were in areas with much higher bike traffic as well. Of course, until the city politicians are ready to start removing small amounts of on street parking it wont happen. (eg would love to see buffered bike lanes along N. 28th from Glisan to the I-84 overpass)

Also hope the lanes wont be getting a bad rap considering both this one and the Holgate lanes don’t really have a huge amount of bike traffic. They really are very pleasant to ride in.

Thanks Kyle and PBOT for making our streets safer for all!!!

Andrew has hit the nail on the head–buffered bike lanes are great, but they won’t be put in the busiest places until the city has the mandate to remove parking. My daily commute is along 20th from NE Knott to SE Clinton. This route doesn’t even have bike lanes, let alone buffered bike lanes, despite being a relatively high bike traffic route. This is fine during low traffic hours, but during rush hour I often find myself being honked at. I’m a young, strong, pretty fast rider, and I still find it less than ideal. The obvious thing to do would be to remove car parking on one side of the street and stripe bike lanes with the extra space. To do that, the city would have to be able to demonstrate a strong demand that would win out over complaints by disgruntled homeowners. Yet to get more bike traffic, the street needs a bike lane. The usual catch-22.
Grrrr.

That truck is parked in the bike lane. Ticket ’em!

I ride up and down 101st between Harold & Foster pretty regularly, and I’m pleased to see the bikification of that street. At the times I ride up and down it there’s basically no automobile traffic, and it’s a far more pleasant route than the i205 bike path, which at times seems to have more motorized traffic than 101st does.

I used 101st between Harold & Powell as part of my route to work, and even in the current “no amenities except the “STENCIL SHARROWS HERE” markings” state it’s quite nice what with passing by two parks along the way. (I didn’t try the section with the buffered bike lanes, however; I rode out past the Begger’s Tick preserve and looped back around on Harold to maximize my travelling-past-parkland time.)

I knew someone would complain about the utility truck in the bike lane. There was a whole other story asking if it is ok for trucks to do this. I was a little suprised that so many people objected to it. I think they just need to do their jobs

Good points. I think one of the true tragedies is that proponents of removing on-street parking have to predict or guarantee the future alternative use. It’s taken me about twenty-five years to realize that the government should be under no obligation to provide or maintain storage space for privately owned property. Reducing free parking is also a good way to start to curb our out-of-control auto-centricity.

I rode through here on Monday to check it out…

it seem really odd that there’s a bike lane there for just 1 block, but it does sort of extend across the street and that helps with the merge back into traffic after the light…

and at least the hill after Harold isn’t too steep…

I think they need to buffer aka widen all bike lanes i ride withe a cargo trailer a lot and i have to ride on the side walk every were because if i ride on the road cars almost clip my trailer and me even without it. they almost hit me. my trailer isn’t that big and each tire ride’s on both white lines with my bike in the center it sucks most my routs there are no side walk even. 70% of the time the side walk is just a small dirt trail why don’t they do something? I will be on the Spingwater corridor trail by the Divisoin max stop with a petition to buffer/widen the bike lane everywhere in portland. In may come and sine it if u want see u then