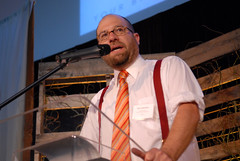 The BTA’s new executive director Rob Sadowsky has been at the helm for about two months now. Between getting to know a new city and state (he moved here with his family from Chicago), setting the BTA’s course for the future, and trying to build an effective bike movement here in Portland, Rob’s got a lot on his shoulders.

Luckily for all of us, I believe Rob’s up to the task.

I look forward to sitting down with him next week for an in-depth chat about the BTA’s strategic visioning process and what the future holds for the organization. But for now, I thought I’d highlight a few recently published articles, one in Street Roots and the other from Rob himself, that tell us a bit more about what’s on his mind.

A week or so ago, Rob was the cover story interview in the local newspaper Street Roots. Street Roots’ editor Israel Bayer asked Rob about a number of important issues. Here are a few snips from the interview:

On what the BTA is doing since the 2030 Bike Plan passed back in February:

“I think we have really turned a corner. This last year has been one of introspection and figuring out who we really are, and organizationally we are beginning to shine some light on what we are and what we can be. We are trying to take steps that are proactive, smart and creative, and not being afraid of risk.”

Rob also published a blog post yesterday sharing some of his “early reflections” on where he, the BTA, and Portland are right now. He broke down his thoughts into: “There is much to do,” “We [BTA] are eager,” “We need help,” and “We need your voice.” He also shared a few “personal commitments” which included being a “consistent and powerful voice for bicyclists,” being “thoughtful, smart and proactive,” and not biting of more than they can chew.

According to BTA staffer Carl Larson, Rob’s already had a positive impact on the organization. In a comment on the BTA blog, Larson writes, “… the office hasn’t felt as confident and connected in quite a while. I, for one, am excited about helping to hold you to those commitments you listed. You’ve got a crew of talented folks here at the BTA who’re eager to work and relieved to have you aboard.”

These are interesting times for bicycling in Portland and I look forward to working with the BTA as we navigate through them.

BTA has not been an effective advocate for cycling before the legislature in the past and will not become one until it develops a truly statewide agenda. You can’t pass legislation with Portland area legislators alone.

Based on what was suggested at the Active Transportation Summit, they’ve got a long way to go. However, if they do that, if they come up with an agenda that is meaningful to cyclists statewide, then the cyclists will contact their legislators and BTA will have a chance at being more successful than they have been in the past.

Jonathan, could you do an article on the BTA’s Bike Commute Challenge? Ridership seems down this year to me. Awareness can only help. Thanks!

Defintely Stig. been wanting to, just haven’t got to it. I plan on something next week. Thanks — Jonathan

Ditto to comment #1, but I’d ask is the BTA going to focus on Portland, the greater Metro Area, or the State?

Some of us who live just outside the Portland boundary, but in the Metro area would like to see a bit more focus beyond Portland proper, and help us create better connections within region. The City of Portland and it’s planners are already drinking the Bike Infrastructure Kool-Aid. Might it be time for the BTA to start working with other jurisdictions that need some of that Kool-aid?

I enjoyed the description of feeling out his son’s bike route.

I’d like the BTA to broaden its focus. How about a portland active transportation alliance, Rob. The web site also badly needs a do over.

“Ridership seems down this year to me.”

BTA is so lame, need a serious shake up, starting with the BOD. That board member from Eugene is worthless, he needs to go first.