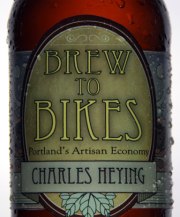 Charles Heying is the author of Brews to Bikes (Ooligan Press), a book due out in October that “explains how post-industrial economic transformations have created a space for artisan enterprises to flourish.” Along with food, fashion, and beer, the book features handmade bicycles as one of Portland’s signature sectors of the artisan economy.

As someone who has closely watched Portland’s crop of bike builders grow over the past five years, I found the sample chapters sent to me by the publisher to be very interesting. Heying’s book carefully details how and why our local economy is so full of artisans and people who pursue their vocation with passion and not profits in mind. Here’s a blurb from the publisher:

“Dissatisfied with passive consumption, many residents of Portland, OR take matters into their own hands and build a network of small businesses. Associate Professor of Urban Studies, Charles Heying, noticed the city-wide prosperity of these organizations and set out to study the secret behind their successes. Profiling hundreds of local businesses with an eye on Portland’s unique penchant for sustainability and urban development, Brew to Bikes is about everything from bike manufacturers to microbreweries, from do-it-yourself to traditional crafts. A treatise to local, ethical business practices…”

I like what I’ve read of Heying’s work because much of what he writes has been communicated to me by bike builders and other artisans in very similar terms over the course of the many interviews and profiles I’ve written. Brews to Bikes puts much of what I’ve suspected about our local artisan economy into more academic and in-depth terms. It’s a welcome analysis that should give inspiration and ammunition to supporters of our vibrant, small-scale, local economy.

Heying claims that Portland “stands alone as an urban economy that has broadly embraced the artisan approach to living and working.” As a journalist who has spent several years covering artisans and their crafts, I would certainly agree with that statement. In my past involvement as an advocate for the local bike industry, I have often compared the rise of our local framebuilders to Portland’s legendary microbrew scene. In this book, Heying makes that connection too.

To bolster his claims, Heying provides a detailed comparison between the “Fordism economy” (an economic system organized around mass production and mass consumption) and the “Artisan economy.” Here’s a detail from a chart that appears in in the book. It compares how each system treats the “moral economy”: 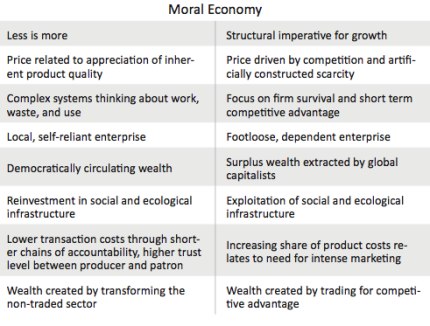 I look forward to a full copy of the book. It should go a long way toward helping citizens and city leaders understand how our local economy is different, and why it should be supported.

In addition to Heying, the book features sections written by students pursuing master’s degrees in the Department of English at PSU. The book is available for pre-order at Powell’s.

let us not forget the growth of the book business featuring our local subjects of beers & bikes!

While this is a spectacular comparison of two very separate ideals, etc. It does seem to argue that the two schools of thought are mutually exclusive. Maybe that isn’t said, but it’s not stated the other way around either.

There is great opportunity to build big companies that don’t completely lose sight of their impact on the world. As well, even if the artisan companies can’t become the norm, they most certainly can make consumers aware, and demand a similar level of accountability from the bigger companies.

It’s not really one or the other, so much as it’s an opportunity for consumers to get involved in producing, and to have a hand in “voting” by demand, how the bigger companies produce in the future.

Of course, through a massive influx, we will also see, I’m sure, a great many NEW paradigms for some types of products, that will create new markets – just as the author compared those microbreweries.

But no matter what – the businesses have to be profitable – period. No one does a job for FREE. And it’s not selfish or evil to want to make a profit. It’s how you make it that matters.