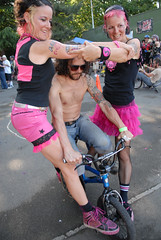 MCBF won’t be at Colonel Summers
Park this year, but it will
still be awesome!
(Photos © J. Maus)

Organizers of the Multnomah County Bike Fair — the event that marks the end of Pedalpalooza — have just announced its location.

This year’s MCBF will take place place this Sunday from 2:00 – 7:00pm on SE Alder Street between 12th and 14th (the southern end of the Washington High School lot). The location, date, and a few other key things about MCBF are different this year. Not only does the fair leave its former home of Colonel Summers Park on SE Belmont, but it’s on Sunday (instead of Saturday) and there won’t be a beer garden.

MCBF will still have lots of crazy bike events (stuff like unicycle jousting, foot-down derbys, and much more), good food, “kickass entertainment” (lots of bands) and all manner of vendors selling bike-related goods. It’s an explosion of bike fun and a fitting end to 17 days of the pure bike bliss of Pedalpalooza.

Since MCBF is on the same day as the North Portland Sunday Parkways, there will be a ride leaving from Peninsula Park (SE corner) at 3:00pm. Got questions? Here’s a handy FAQ created by Shift volunteer Carl Larson.

– I’m an alcoholic and I need booze to have fun!
That’s rough. There’s a bar nextdoor and a Plaid across the street. Do what you’ve got to do but remember that drinking from an open container is illegal. You could get a ticket and, worse, get the event shut down.

– What do I do with these children?!
Bring your kids and bring their bikes, too! There’s plenty of room to ride around and, from 2-3, there will be lotsa kid-friendly events. So get there early

-The changes! Why oh why oh why have you made the changes?!
The Bicycle Jesus and the OLCC work in mysterious ways. This year’s MCBF is going back to the event’s straightforward bike-oriented roots.

-Okay. Sounds swell. Can I help out in some way?
Certainly. Contact Bonnie at pinkgrrlqat@yahoo.com if you want to volunteer. We still need cleanup helpers and people to discourage obvious public drinking.

-I’m a huge Scorpions fan but I was only 9 when Monsters of Rock played the Hoosier Dome in ’88. Will I ever get a chance to be rocked like a hurricane?
Maybe. The Scorpions haven’t confirmed yet (Klaus lost his passport) but the rest of the bike-based Monsters of Rock 2010 Tour including Full Face Riot, Start Fires, Crank My Chain, and Total Recall will be performing at MCBF following their sold out appearances at Sunday Parkways! MCBF is also a stop on the long-awaited Trash Mountain Boys Reunion Tour. It might not be like a hurricane, but you’ll be rocked like something.

If you’re new to town, or just have never been to MCBF, check my slideshow from last year to get a taste:

See you on Sunday!

Wondering what Monsters of Rock by Bike is all about. Check are first try at May Sunday parkways.

GiGi and I will be instructing Hammercise at both the monsters of rock tour, and at MCBF! Make sure you wear something that can be danced in!

I’ll be there with handmade cycling caps galore!

really lame this year. hardly any vendors and the location doesnt allow for as many people. was there a funding problem? I was really disappointed this time around.