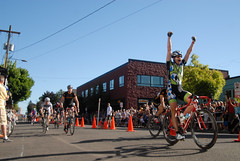 Who will be crowned the fastest sprinter
in Portland?
(Photo © J. Maus)

Next month, Portland will be introduced to an exciting brand of bike racing: street sprints.

The Ironclad Performance Wear Cycling Team (read my profile when they launched in 2007) has announced a Street Sprints competition that will take place on NW 13th Avenue in the Pearl District.

“We hope to bring something new and fresh to the summer racing schedule… The format has never been done here before, and I’m borrowing it from a race series back in Illinois where I grew up.”
— Dave Aldersebaes, Team Ironclad

According to Ironclad team leader Dave Aldersebaes, the sprints will happen in heats of four competitors lined up side-by-side who will sprint for three blocks. “No drafting, top two go on, bottom two go to the bar.” Aldersebaes says the heats will be drawn at random, so it could be men versus women even Category 1s (pro-level racers) verus Category 5s (novice level) going against each other. [Correction: races will not mix sexes until the final four are determined.]

Aldersebaes says, “We hope to bring something new and fresh to the summer racing schedule… The format has never been done here before, and I’m borrowing it from a race series back in Illinois where I grew up.”

Details are still being finalized, but the race will likely go from NW Quimby to Northrup. Aldersebaes says he’s hoping to land a formal sponsorship with one of the nearby breweries (Laurelhurst and Bridgeport come to mind).

The sprints should be the perfect warm up for the following day when Team Ironclad will host a criterium race in downtown Hillsboro (which would also be a first).

Mark your calendars for July 24th and 25th to watch and/or race what will hopefully become a popular annual event.

— In related news, organizers announced a date of August 13th for the annual Portland Twilight Criterium, which is another must-see racing event in downtown.

After getting second place in the gold sprints, I’ll say this is probably not the perfect thing for doing anything the following day 🙂

Drag racing for bicycles. I think we need some extra category differentiation though, sort of like they have for NHRA….I see tandems, cargo bikes carrying a sack of concrete, and folding bikes as potential candidates.

Hands on the bars! That’s a DQ in OBRA rules 🙂

I bet Vance will be crowned fastest sprinter.

can you imagine people still bet on horses? may velodromes employ your children and children’s children.

Actually, given the average strength differential between the sexes, mixing random draws in the early heats are more likely to have upsets. By the time you have narrowed the field to the top two of each, women are no longer competitive with men.

Of course the flip side is the bottom 80% of women are going to lose in the first or second heat. So it depends what you want for women: more competitive racing for most women, or amazing upsets for the top few.

A final wrinkle, women might be able to compete against the men in the final if they have had considerably fewer heats than the men to get to the final.

I see your point Cougar!

If I may be so bold as to challenge you: If Tina Brubaker or Melissa Sanborn end up in the final (which if they attend, I think they would) I got ten bucks on each says you’re wrong, West Cougar.

I’ve seen stranger things in this format in the past…..slipped pedals, mis-shifts, poor gear choices, dropped chains….anything can happen, and that’s the beauty of the format.

And with random prize and cash drawings continually through all the heats, for places 1-4 – even if one “loses” the sprint, one may win some cash or some cool stuff.

Hooo boy! I know it’s not all about the bike but if anyone is running the Shimano Di2- big advantage. A rider can ride full gas and shift cleanly.

Also- will there be a single speed or fixed gear category? I like where JV is going- more categories!!

Dave, that’s not being bold, that’s being obvious. Given a random draw from cycling enthusiasts in the Portland metro my stochastic characterization applies. That you can name an outlier or two that will upset the general tendency doesn’t effect my point. Nor get you $10 of my bucks. 🙂

The rules make the contest. The race promoters get to decide what kind of contest they want by making the rules: one where the top women get to “compete” against the top men in a final with unsurprising results; or one where fewer women advance very far, but the few that do make for some exciting upsets along the way.

I think mixing in women on an equal basis would be more exciting, and if there are random prizes awarded in the early heats even more fair.

But hey, it’s not my race. I’m not telling them what to do, I’m being cognizant of the effects of their doing. The organizers are free to do whatever they wish to get the type of contest they wish. If it’s unfair that 80 men are competing for 10 random prizes for their class, and 22 women are competing for 10 random prizes in their class, well that’s life and that’s what the organizers have chosen.

Another messenger event gone to the masses……

Should be fun though..

This looks to be good fun. I’m going. I’ll pay a few bucks to dig in. What the hell?

We did this unsanctioned on track bikes in the industrial area years ago. And obviously track racers have been doing it for years at alpenrose.
Roadies are finally joining in. Getting rid of the hours of boring sitting in with the peleton riding. Good for them.