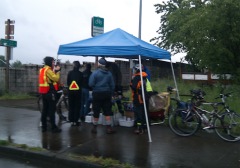 It’s not everyday that people in the eastern parts of our city feel Portland’s legendary bike love. But this isn’t everyday; it’s Bike to Work Day!

On that note, I thought I’d share an email I got from reader Michael Mann, who was setting into his usually lonely commute this morning when — lo and behold — he was greeted by coffee, pastries, and smiles:

“I was hunkered down and facing another wet and cold commute in to Gresham when I saw the blue pop-up, smelled the coffee, and was greeted by those awesome folks from Shift, PBOT, and whoever else was there [ODOT, Friends of Trees, and the East Portland Action Plan Bike Subcommittee]. Plus they were handing out free lights.”

Mann added that everyone was surprised at how many bikes they saw go by in this area not known for two-wheeled traffic. Mann says that jibes with his personal experiences of late. “Bike commuting in east county is growing,” he wrote, “I’m so used to reading with envy about BoB [Breakfast on the Bridge] on the Willamette that it was a big surprise. Thank you, BoB folks – you made my morning!”

How was your ride this morning? Did you notice more people than usual in the bikeways today?

I think I may have seen a few less than usual going from NE to the South Waterfront due to the downpour, but there were still a decent number out 🙂

Made my morning to see this on the rainy commute – a pleasant surprise in outer east side. Thanks East Portland Action Plan folks, PBOT, Shift, and whoever else helped set this up!

Seemed like fewer than normal to me, but I don’t normally see a lot during my morning commute from the Powell Butte area to downtown – not at 6am, anyway.

I would’ve thought it was winter with the weather and all, but it wasn’t dark out. It’s been nice having daylight for both directions of my commute. Now, about that rain …

Oh look! I am in that photo! (not that you can tell). I was so happy this was occurring that I rode out there at 6:30 this morning in pouring rain to make sure and enjoy *something* happening on my route. Even since I was working from home, today 🙂 So thanks Timo and Elizabeth and the other volunteers. We really appreciate being included!

Awesome! The heavy rain and a pregnant wife had me on the train this morning, but this is a great show of support for those of us east of 205.

Can the SW riders get some love too? The number of riders from SW seems to continue to grow. Of course this time of year the numbers tend to increase.

I stopped at the blue tent – wouldn’t miss it for the world after finding out a couple of days ago. Good folks as always and real eager to please and provide information.

Good listeners too – I have a habit of telling anyone who’ll listen the horrors of SE Stark between 122nd and 108th.

I had my choice of donuts. The coffee was great and the conversations better.

Hey Eastsiders- I strongly encourage you to hook up with the East Portland Action Plan!

On my way in I made sure to holler at fellow cyclists (two of them) along B-Side: “Free Coffee and Donuts – 205!”

Thanks Jonathan for reporting on this, and thanks to all the folks who made it happen –
EPAPbike for canopy, juice, donut acquistion, photos, rider counts, and most of all good cheer!;
ODOT for maps and good cheer and hopeful news about an improved I-205 Path connection near Flavel;
Community Cyclin Center for bringing Get Lit! lights to the event and excellent cheer in the face of typical January weather;
and all the riders of East Portland – you guys rock!

And join us for great Women on Bikes and Portland By Cycle rides – click my handle to learn more.

Yes Sam, there IS more Portland beyond 82nd ave.

You all made some sunshine on a rainy commute. Thanks.