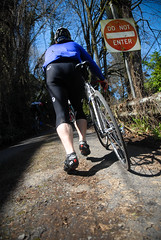 Portland’s infamous De Ronde van West Portland, modeled after the classic Tour of Flanders in Europe, takes off this Saturday (4/17). There’s been some confusion over whether or not the ride was even happening, so consider this post your official invitation to take part.

The men behind the ride, Hugh Givens and Brad Ross, are not officially hosting the event this year, but they’ve updated a website with a detailed route map and they still plan to meet and ride with whoever shows up.

If you want to attempt to conquer 47.5 miles of Portland’s steepest hills with Brad, Hugh, and a bunch of other masochistic psychos on a truly legendary ride, meet near the corner of NW Industrial and 31st at 10:00 am. You can view the most updated route map here. 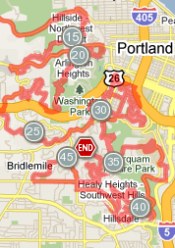 Detail of southern portion of route.

Once on the route, you can find your way via the freshly painted lions of Flanders on the pavement. If you go, remember the ride’s basic rules (as published on RondePDX.com):

The De Ronde has been held since 2007. 100 people showed up to the first one, then word quickly spread and nearly 400 people showed up in 2008. Last year, the ride drew between 6-700 riders and was the subject of a segment on Oregon Public Broadcasting’s Oregon Field Guide show. Read previous coverage of the event here.

I’ve been getting phone calls and emails for weeks about this ride. People are coming from as far away as Seattle and Corvallis to take part. Are you planning to give it a go this year?

I just looked at the course map. I’m all about hills but, for me, there would surely be a vomit rest stop at some point.

Does anyone know the total elevation gain?

If you click the “show elevation” checkbox on the map it will show you the elevation profile. According to the map it is 4613 feet gain.

I live at the bottom of the West Hills in the Park Blocks and will often go on “rambles” (inner-city urban hikes for the uninitiated) with my wife and dogs to Council Crest from our pad. It’s a mere 2.7 miles to the top of Council Crest from our place, but the first 1/4 mile up 16th Ave is a KILLER if you’re not used to climbing hills.

We came down last year from Victoria, BC; so Seattle’s a bit…non-distant.

on average how many hours does this take?

Seattle? Psh, I came down from Victoria, BC to ride this last year.

From just under 3 hours to ??…..probably 4 to 5 on average for experienced riders.

For some just under 3 hours…for most experienced riders somewhere in the 4 hour range.

I need to make this! very simple, but painful. 🙂

I take my hat off to everyone who’s in shape to tackle this ride at this point in the spring. I’m looking forward to giving it a ride with my buddies sometime in July or August. 😉

This ride is just a warm up for the death ride in Alpine County, CA. 15,000′ of climbing. I am tired just saying that.

I’m around 70% inclined (no pun intended) to do it.
I commute year round but haven’t gone more than 30 miles since last August. Here’s to hoping that it’s not a race!

No it’s not a race, and someone mentioned it was a simple ride….There’s more turns on this ride than any I’ve ever come across. And having a map of the area is a good idea too. I almost took a wrong turn last year on an unmarked intersection. Hmm. This might bring out the cops this year, with the announcement and all, probably should space out some groups at the start. EVERYONE RIDE LEGAL!!!

This ride is my all time favorite “group” ride. It has taken me through neighborhoods of Portland I had never seen before, given me grand views (at least last year when it was sunny…not the year before), and left me a complete shell at the end. It hurts, yes. The experience is one you will not forget.

Just under 3 hours is impressive, for sure, and 4 hours for “experienced riders” is still darned quick. Took me 5, plus the 45 minute commute to the start and back home, which made for a long day in the saddle (mostly pointed upwards), and I would say I ride a fair bit. So your mileage (or time, as it were) may vary.
Regardless, as Jed pointed out, it is quite the experience and worth the effort at least once. Have fun.

Masochistic Psychos maybe,maybe not.Any one who can finish this ride can lay claim to FITTEST OF THE FIT! I Have been Attacking hills for the past 5 months.Really Happy & looking forward to coming up from Corvallis to ride the De Ronde van west Portland. SWEET !!!

Keep in mind that there is sewer construction on Industrial between 26th and 29th, as well as railroad tracks all over the place. Try not to get injured *before* the ride.

If you’re a relative newbie, maybe you’re looking around for something else after having completed the Springwater Trail loop, Bridge Pedal, and the STP…, this ride is pretty much the next logical step.

I wouldn’t compare this to CA’s Death Ride, which is totally in a different category.

So the markers that were put down on the street, are those permanent? I’d like to try this on my own later this summer when I am in better shape, and no one is around to watch me stop and rest. 🙂

A.K. Yes, they’re as permanent as spray paint can be. Some wear off pretty fast. We’re trying to get the city to designate this ride as some sort of official route. In which case, the marking system would improve dramatically.

Anyone have a decent printable map of the route?

Suggestions on getting to the start from different areas of metro? The Max? Thanks.

The multiple approaches to council crest was soul crushing, but the weather was perfect. Doing it in weather is a whole different level of suffering. The inspiration across the pond is known for the weather, so the penultimate PDX De Ronde should also be in the weather.

Death Ride? I dunno, I think the Ronde may be tougher in some respects. The Death Ride is all about long, steady climbs–up to 12 miles, with not so many pitches steeper than 10 percent. You can get a rhythm going. There is the altitude thing, though.

A buddy and I, and six or so strangers turned up a couple of weeks ago on the traditional day for the ride, the Saturday before it’s namesake in Belgium.

It was cold and quite wet. My training was not up to par, but I finished in just under 6 hours (includes an additional 8 miles to get there).

No ride near Portland inflicts this specific kind of suffering. Is great.

I’m going to start about 6:30 or 7:00 before the crowd, some of these climbs are hard enough with only myself on the road, if you are doing the death ride, do this one twice and expect a hail storm to appear out of nowhere.

If the city put up permanent signage you couldn’t add more hills every year, can’t have that can we? As for the vertical, I’ve ridden the course the past two weeks and there are just about 8000 feet of fun. Some more fun than others. Pack a lunch.

Yesterday I noticed someone on Dosch had a huge yellow Lion of Flanders banner hanging in their driveway. Exciting!

Great day, and great weather. I rolled back into my garage at home about 15 seconds before the clouds opened up! Not quite as big a crowd as last year, but still a good turnout. Also, did not see or hear about any ambulances, so I assume everyone made it up and down safely. If so, that’s great.

Elevation gain is at least 7000! My bike computer measured 7500 and the OPB video referenced says 7400 and change. The mapmyride.com elevation is wrong. Often mapping web sites use elevation data that has a large contour interval which leads to inaccurate results if the road goes up and down within the contour.

Came out to the west side to do a different ride actually. But I was running late and that group left without me. Rode up Germantown twice and caught a couple of guys doing their own route. When we pulled into Skyline Cemetery, I saw what turned out to be the first Ronde group come flying by. I ditched the two guys on good terms (who were paying respects to family members) and I pulled out onto Skyline just in time to catch the second group. I had forgotten about Ronde and couldn’t figure out which club ride was attracting hammer heads from all different teams. Once we hit Brynwood, it hit me what ride I had stumbled upon! That’s also where the fast guys dropped me like a rock because I was over-geared and under-trained. Ended up doing all but the first 8 miles or so of the route. Overall time was in the lower 5 hour range. Fabulous ride – gotta train better and do it again next year!

You, who stole the full-sized Flanders flag from the home near the top of Westwood. Take it back. Not a nice move to put on a fan.

Did anyone get pictures they can share? I saw a few photographers on the course. Thanks.

Here is the link for pictures, I was in one at the top of Brynwood. http://www.dmroth.com/ronde_11/ronde11.html