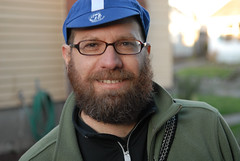 In a statement about the hire, BTA Board Chair Mary Roberts wrote:

“It is a critical moment for cycling both locally and nationally, and I am proud to have Rob join us at the BTA. I really feel that we are going poised to grow both the BTA, but also to help the cycling movement continue to gain momentum.”

Sadowsky will continue in his position at the Active Transportation Alliance until July. He’s been involved with that organization for nine years, the last six as the executive director. The ATA’s board chair Jane Healy wrote on their website today that, Sadowsky led them to “impressive victories.”

While at the ATA, Sadowsky oversaw a major change in his organization’s mission that could have relevance in his future with the BTA. In 2008, they changed their name from the Chicagoland Bicycle Federation to the Active Transportation Alliance. That change occurred in order for them to expand their mission beyond just bicycle advocacy so they could work as advocates for people who walk and take transit as well.

Here’s the mission statement of the ATA:

“To make bicycling, walking and public transit so safe, convenient and fun that we will achieve a significant shift from environmentally harmful, sedentary travel to clean, active travel. We advocate for transportation that encourages and promotes safety, physical activity, health, recreation, social interaction, equity, environmental stewardship and resource conservation.”

Both the BTA and the ATA have about 5,000 members. Stay tuned for more information following an interview with the BTA’s Roberts and Sadowsky.

Oh good. He has one of those cute little hats!

I hope Mr. Sadowsky can get the BTA back on the right track. Portland is by no means the only bike-savvy town in the country, but I’d be curious to know whether the BTA considered any locals or if they wanted someone new to the area with a fresh/different perspective all along.

If this guy can win battles in the cutthroat arena of Chicago politics, then he should school our brand of locally elected yokels. Sam Adams and Randy Leonard are like junior high school student council leaders compared to Richard M. Daley and Chicago’s aldermen.

Welcome to Portland and best wishes!

Welcome to Portland, Rob – you’ll be getting here just in time for Sunday Parkways – unless they cut the budget. Sunday parkways might be a great place to dive, Rob. It’s all about multi-modes – walking, biking and livable streets and deserves to grow not be cut back.