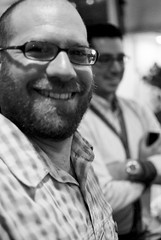 “He brings a really solid, proven track record in running a non-profit that includes organizational development, running the finances, strategic planning, working with government contracts, development… he’s versed in the fundamentals of nonprofits.

He also knows the language of bicycle transportation and serves on several national organizations. We did a national search and had a high number of applications, but no one brought that package of experience and the knowledge of transportation…

Rob is very strategic, entrepreneurial and opportunistic… In talking to him we could see that he was looking out for what we are trying to achieve. What are my opportunities to get there strategically?”

Will an interim leader be named?

“We had hoped to have someone on the job in March… but we respected Rob’s needs. The board will decide on an interim — someone who helps hold the organization together and keeps people supported through this next period of time. We haven’t decided, but the board will make a decision within a week.”

Rob oversaw a major expansion of his organization’s mission (from a bike-focused group to one that focuses on bikes, walking and transit). Does this hire portend a similar change in the BTA’s mission? 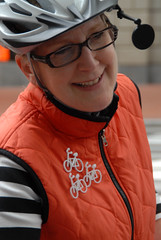 “No, not at this point. Rob asked in the interviewing process about that… we said we want to talk through all these ideas… that’s an open door. But at the same time, what we said to Rob was, we have a really deep, avid, fervent bike culture in Portland and in Oregon and we need to really pay attention to that energy and that passion because that allows us to catalyze action in our communities. This [hire] is not a signal of a change of mission.”

How is Rob different from previous BTA leadership?

“Rob brings experience in running a non-profit and he has demonstrated skills to make us successful. Our previous ED’s were the right people at the right time, but none of them bring the kinds of experience that Rob does. He’s also known at the national level. We’re bringing a national leader to Portland.”

The BTA underwent a lot of change in 2009, will filling this position help calm the waters?

“I think having the ED position filled by someone who has his experience and knowledge will definitely stabilize the organization.”

Why did you want to come to Portland and work at the BTA? 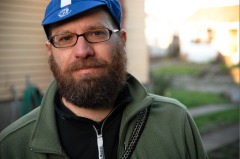 “It’s easy to fall in love with Portland. I went to a conference in 2007 and came back thinking I ‘d really like to live here. It also ties into my own cravings to move back to the west coast, to be near mountains and the ocean.

The job itself is a nice mix of opportunities that matches my skill set. As I got to know more about the organization and the talent already there, it gave me some real energy about the future possibilities of what can happen.

Portland is at the forefront and I’m looking forward to being right there, not following anymore, being right where the leaders are.”

Why won’t you be starting until July?

“I have a life to close up before I can open up a new life. I asked for as much time as the board would be willing to give me. I have an organization that is really going strong, but more importantly, my family wants to move out together and my kids finish school in June (he has children ages 17 and 13).”

How will your national leadership help the BTA?

“It was wonderful to hear the news today about $20 million for bike boulevards… but we need to raise $580 million more to get that plan done, and only way that’s going to happen is to get support from the US DOT. We need to be at the forefront of bills that are being worked on right now — jobs, climate change, and so on, both in the front room and back room when those deals are being cut, that’s something I’ve been involved with in Chicago. I have strong relationships with congressman, committee chairs, and I have a strong relationship with [US DOT Secretary] Ray LaHood [LaHood is a former member of Congress].” 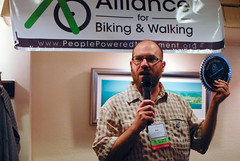 Sadowsky accepted a “Best Practices” award for
his organization at the National Bike Summit
last week.

Tell me more about your relationship with LaHood:

“I met with Ray LaHood in a personal meeting back in October to talk about our agenda at the Active Transportation Alliance. It was very easy for me to get that meeting. He’s coming to Chicago in the next few weeks to participate in a groundbreaking, and now I can add Portland to that relationship.

In addition to that, I also have a strong relationship with Jim Oberstar, Chair of House Transportation and Infrastructure Committee. Having the ear of those two men is 2/3 of the formula of budgetary allocation in our federal transportation dollars.”

How would you describe your advocacy style, on the spectrum of conservative to aggressive?

… I am not afraid of big and bold ideas, it’s important to push on our leaders to set some big goals and make it clear where we want to go. The vision has to be doable, and possible, but it has to be big. We’re going to try to build a movement, not just around pedal-power, but around how we relate to the streets. Incremental change may be the first step, but if all you’re seeing is incremental changes and you don’t know where you’re headed, that can be frustrating.”

The BTA’s top staff spot has been vacant since they ousted Scott Bricker back in November and launched a national search for his replacement.

This is an amazing hire for the BTA. I have met Sadowsky several times at the National Bike Summit and I got to spend some time with him during a recent visit to Portland. He’s a top-notch advocate with a passion for street-level organizing, yet with an astute demeanor that gets him respect in the towers of power.

Last week at the Summit in D.C. he accepted an award on behalf of Active Trans from the Alliance of Biking and Walking, a national coalition of 160 advocacy organizations. The award was for the “Best Practices” and it was given Sadowsky’s organization because they “set the bar high for other agencies to model” and hold “transparency and good business practices at a premium demonstrating that through operating professionally and responsibly, you can more effectively build a movement around biking, walking and transit.”

The man that leads that organization will soon be on his way to our city. Great things are ahead for Portland. And, as Portland goes, so goes the nation.

Thanks Jonathan. I, too, look forward to working with you and the rest of the bicycling community.

Thanks, Jonathan – this is a real promising step – based on what I’ve heard, Sadowsky seems an excellent choice to lead the BTA and take a more aggressive stance. I look forward to seeing what transpires going forward from July, and whether the BTA will meet the challenges it is setting for itself and maintain the leadership position they’ve established with the city and local advocates.

Portland will not disappoint. Thanks for taking on the challenge.

Wow! Congrats to Rob and the BTA. And Rob welcome to the Portland and SW Washington metropolitan area. 😉

As a 20 year NYC Transportation Alternatives member…they have become a much more dynamic and successful organization when advocating for all vulnerable roadway users vs. their narrower bike centric focus in the early 1990s. The single mode focus works great for new advocacy groups but not forever.

Well we still have Ben. Portland keep your hands off Ben because he’s really, really good. Don’t you go hiring him away from us too.

Best of luck to you Rob. You, too, Portland.