Portland’s Retro is making a name
for themselves in the jersey business.

Southeast Portland-based apparel company Retro, has inked a licensing deal with The New Yorker to release two cycling jerseys based on the magazine’s iconic cover art. It’s just the latest licensing deal for Retro, a company that has found success by designing and marketing bike jerseys to a global market.

Retro, formerly known as Retro Image Apparel, says the jerseys will be available June 1st as part of The New Yorker’s 85th anniversary celebration. The two designs are based on art by American artist Theodore G. Haupt and Spanish artist Ana Juan. Check out the designs below: 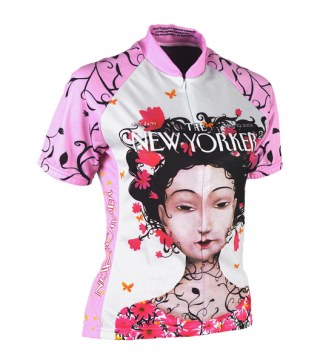 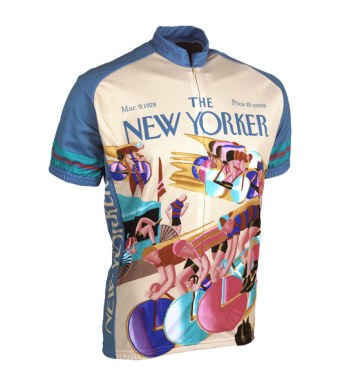 Retro set up shop in Portland in early 2009, after moving here from Seattle Washington. CEO Roger Mallette started the company in 2002 and has grown it from a home-based operation to a major concern. Retro has secured licensing deals with many microbreweries (including Portland’s Lucky Lab) and other brands including Whole Foods, Urban Outfitters, JetBlue Airways, and more. Their jerseys are available in 450 stores across the country.

Check them out at RetroImageApparel.com.

My inner yuppie wants one!

Love the magazine, love the art. Looking at the bottom one, I see the price per issue was 25 cents. In 1929, I bet that was a tidy sum!

The upper jersey is striking. Love how they carried the curly-vine theme in the main image onto the sleeves. Sharp!

Nice placement of The New Yorker name on the jerseys. Always a classy font to look upon. In that location it’s easy for observers to see and recognize what it actually says when a person wearing it is on a bike, bent over the handlebars…if they’re on the drops of course.

Any shots of the back of these jerseys?

Beautiful! Roger is an awesome dude and he makes AMAZING product. Look for his Lucky Lab jersey, Schmaltz Coney Island jersey, and others. I have several and not only are they gorgeous, they fit perfectly, nice and long!