Oregon, here’s your new State Treasurer (on a bike of course!) 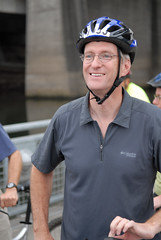 Earlier today, Jeff Mapes at The Oregonian broke the news that Multnomah County Chair Ted Wheeler has accepted an appointment by Oregon Governor Ted Kulongoski to be State Treasurer (filling the void left by the late Ben Westlund).

The news is a blow to our region, as Wheeler was an effective and well-liked politician who was tackling big issues with an all-too-rare-these-days combination of skill, charisma, and candor. Last week he left a comment on our story about studded tires.

I won’t get into who might take his place and what this means to our region’s and Oregon’s political landscape (I’ll leave that to folks at BlueOregon, Jeff Mapes, etc..) — but, just for the record, I thought I’d share a photo I snapped of Mr. Wheeler back in August. 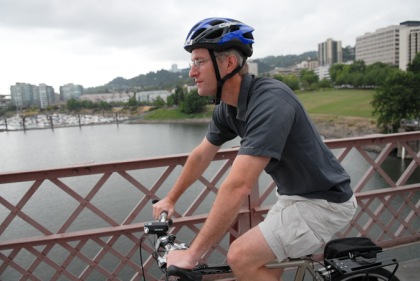 Wheeler riding across the Hawthorne Bridge on a ride organized during the Safe Routes National Conference back in August.

Congratulations on your appointment Ted, let us know how the riding is down in Salem.

Wheeler is an old Engish name that no doubt had something to do with wheels. Teds familly may have deep roots in cycling

I for one, am hoping that Mr. Wheeler is positioning himself for a run at the Governor’s office. He needs to get statewide name recognition and the Treasurer’s post is a good step towards that. Go Ted!

Were going to miss Ted, to second #2 I hope he runs for governor too! Why not? He’s a no-nonsense politician, calls em as he sees em & is a compassionate politician, not just in rhetoric. He got Sam to back down from the Convention Center Hotel, he has said the property tax inequities need to be fixed. We need someone who will tackle the big problems which will yield big results.
Thanks for all your hard work at the county, you will be greatly missed.
Sincerely
Jeff Bernards

This seems to be the way of our political enviroment. Step one, rising politico serves all, far and wide. Step two rises to middle local political elevation. Step three, favorite son gets promoted to state level, leaving a vacuum at local level. Sad, we will miss his efforts and results.

Cream rising, I hope. Considering that many of us were despairing of Multnomah County before Ted, and we’ve despaired of state government for years, maybe he’s heading where he can do the most good. And he obviously reads the right blogs.