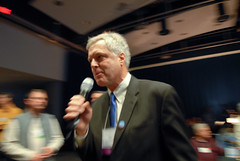 As reported earlier, Bikes Belong revealed a major new campaign tonight aimed at unifying a million voices in support of bicycling across America. The People for Bikes campaign was launched to a room packed with bike advocates and industry leaders from across the country at the opening reception of the National Bike Summit.

During the announcement, Bikes Belong executive director Tim Blumenthal shared a bit more about the campaign. He also shared a video they used as inspiration for the campaign (watch it below). Blumenthal said the official public launch will take place at the Sea Otter Classic bike race and festival in California on April 15th-18th. 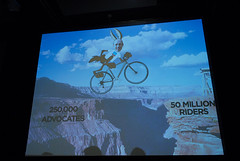 During a slideshow presentation, Blumenthal illustrated the goal of the campaign by sharing a Photoshopped image of League of American Bicyclists director Andy Clarke as Wile E. Coyote jumping a bike over the Grand Canyon. One side was labeled “250,000 advocates” and the other, “50 million riders.” Blumenthal also shared one of the campaign ads and said, “You’re going to see these ads everywhere.”

A video was also played during the launch presentation. Blumenthal said it was created during the development of the campaign and shows the kind of spirit they’re after. I recorded the video with my iPhone. Watch it below (and listen to the rousing ovation at the end!):

Any idea when a Youtube video will be uploaded?! It would be awesome to get this as much exposure as possible!

Thanks Kronda! Seeing the video has gotten me pumped!

I love it but, people ride bikes outside of Portland too.

The video was made in Portland, but it’s a national campaign sponsored by Bikes Belong, which is based in Colorado.

“Bikes Belong’s mission is to put more people on bicycles often. We work to make bicycling better *in America* by:

Strength in Numbers and Unity”

Is that you in the video, Kronda? Sweet!

The film was conceived and produced by NORTH, a Portland-based creative brand agency. Thanks for the kudos.