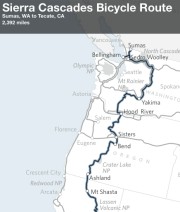 Adventure Cycling, a 44,000 member non profit that promotes bike touring, has announced their latest route and it goes right through some of Oregon’s best riding areas. The 2,392 mile Sierra Cascades Bicycle Route runs from Sumas, Washington to Tecate, California.

According to the just-published information on their website, AC says the new route “runs roughly parallel to the Pacific Crest Trail along the Cascade Range and Sierra Nevada from the Canadian border to the Mexican border.” Here’s a bit more detail on the Oregon portion:

Section 2 begins at Mt. Rainier National Park and runs south to the wind surfing country of the Columbia Gorge and Hood River, Oregon. From there it skirts the Three Sisters Mountains through Bend, Oregon ending in Crater Lake National Park. This section intersects the Lewis & Clark Bicycle Route in Hood River and the TransAmerica Trail in Sisters, Oregon… After leaving the spectacular scenery of Wizard Island and Crater Lake, the route continues south to Ashland, Oregon, home of the Oregon Shakespeare Festival.

This is great news for Oregon’s effort to boost bike tourism and reap all the economic benefits that recreational bicycling brings to our state. The route will also be a welcome addition to the excellent Ride Oregon website. Adventure Cycling is widely known and respected for their routes — like the Underground Railroad and the Great Divide routes — and, like those, the Sierra Cascades route is sure to bring many more bike travelers to our region.

Detailed maps won’t be available until mid-April, but you can download an overview here.

This is indeed excellent news. It’s an important segway to promotion of the unbuilt portions of the Historic Columbia Hwy. People cannot as yet ride safely from Multnomah Falls to the car-free portions of this route in Hood River

I’ve done the Coast Route and “Pacific Crest Bike Trail” (from a book by the same name) and let me tell you, aside from the ocean, which is obviously very beautiful, riding through the mountains beats the coast route hands down for scenery and more importantly, lack of annoying, maddening, dangerous vehicles! I’m going to start planning to ride this new route right now!

I agree wholeheartedly. The coast is great (I’ve ridden it from Seattle to San Diego) but I’d much rather find myself on a narrow road through the cascades and sierras. This might have to be my next trip!

Aaron (#1) – I know this is a nitpick, but… segue. Segway is a trademarked vehicle that I’d rather not see on the HCRH.

The ACA Sierra Cascades route sure looks like it was based on Bill Paul’s Pacific Crest Bicycle Trail, which was published in 1990 in a book of the same name (like Todd @ #2 says, above). I’m not sure what is new about it except for the ACA managing to not ever mention the original developer’s name at any point in their promotion of their version. Yes, I’m sure the ACA maps will be a needed update to current roads and en route resources, but I also suspect the route may undergo some changes to make ACA map users more comfortable with the very isolated stretches.

Like Todd, I too have ridden the coast and the original PCBT. He is right on the money about the PCBT (the “Sierra Cascades” in its imminent incarnation) being the better ride when the experience of the ocean is removed from the equation. In fact, Bill Paul told me that the Oregon legs of his original route were his favorite parts of the whole thing!

That was about the longest, most beautifully townless and peaceful wilderness-rich sequence of roads I’ve ever ridden. Not only were there many criss-crossings of the PCT (Pacific Crest National Scenic Trail) itself, but on some days the route was closely parallel enough to catch hikers walking along beside the PCBT pavement.

I know I should withhold judgement on the ACA version until I see the actual map. I’d do the original again in a heartbeat. If ya can’t find or aren’t crazily adventurous enough to use the original guidebook as a starting point, then I must recommend the ACA mapset whenever it comes out, ’cause this has got to be one of the country’s best mapped rides.

Wow, posting about this shook loose a memory about that ride!

To start the Pacific Crest Bicycle Trail (soon to be ACA Sierra Cascades route) in ’96, I rode up to Sumas WA and visited the American border station. I was greeted by friendly, unarmed officers who were very laid back as I asked about starting out the next morning by getting one of them to take my picture astride my bike in the no-man’s land in between the US & Canadian stations. “Sure,” they said, “no problem, see ya early.” In fact, I slept that night on property in town which one of them owned and offered for me to camp upon, after hearing about the trip I was about to begin.

In the morning, I rolled up in the dawn to a very quiet border station. Nobody was visible as I approached the gate and I called out. Suddenly an officer appeared beside me in battle dress – flak vest, Kevlar pot, M-16 at port arms – and he ordered me to get off the bike and come inside. I began to object, but figuring I was outgunned, I went inside with him while another officer rolled my bike into an adjacent room and commenced to strip off and empty the panniers, etc. My interrogator wasn’t real good about the dialog part of talking with someone and kept asking the same things over and over, but I think he was nervous.

Finally, after an hour, I managed to get them to call the shift commander from last night who seemed to convince them over the phone that I was not a threat and to release me and my bike. They did, and I never got my picture to start out the ride from the Canadian side of the route (the US border station was actually shut).

Seems that that morning, not very long before I showed up, an airliner had exploded over New York harbor and it was being (erroneously) ascribed to terrorist action and the USA had slammed its borders closed. The fresh agents at the Sumas station were a new shift and no one had heard about my visit from the night before and apparently a bicycle was just too much for them to process and therefore I fell into the category of “threat.” Geez.

After that, things only got better and the ride was just one amazing day after another.

Okay. Found the discussion of Bil Paul’s PCBT on an ACA forum page, where ACA clearly acknowledges his founding of the route which serves as the basis for Sierra Cascades, so I admit that my whining about their lack of respect is unfounded.

Bil Paul apparently did an update of his originally-published 1990 route as recently as ’08, using less off-pavement choices. Expect the ACA route to be still more cushy and less remote, though. Their comments on the forum indicate that they will have made changes according to their own lights. The Sierra Cascades route is also the first mapset the ACA will publish based entirely on GIS systems.

Next long ride was gonna be back to Chicago, but now I’m likin’ this as a cheaper, completely different trip. Can’t get enough…

Jene-Paul — thanks for your comments.

FYI, I met with Bil not long after becoming Executive Director of Adventure Cycling (about four years ago) and our discussion was a catalyst for this new map set. Bil actually served as our on-the-ground researcher for it, starting with his 1989 route.

As a Californian who loves the Sierra (and the Cascades), I am really looking forward to the release. The route will be great in its own right, but will also combine with many of Adventure Cycling’s other routes to create some terrific loops.

BTW, we are planning route release parties in early April in Seattle), Portland, and Eugene – more information to come.

Jim Sayer! No — thank you for adding your response. You would certainly have one of the best perspectives on the whole thing.

In fact, I’m really glad you and Bil hooked up, ’cause ACA has the reach to spread the word about the wonderful experience of the route he began, to expand & evolve it and to maintain its accessibility over time by virtue of the organization’s skill & service. It may be the best way to honor Bil’s work (not meaning to diminish the effort of those who have advanced the “new” route), beside being another avenue to open folks’ eyes to more of the beauty of the western USA.

Seriously, I bet this beer here that Sierra Cascades is going to become one of ACA’s most-loved routes, whether in combination with other rides or all by its own thousands of beautiful miles. I parted with two copies of the PCBT book last year, so now I guess I’m waiting for the new SC map set.

Please keep us (or Jonathan) posted on the release events. If the map sections were available, it should be possible to rustle up a party of intrepid Portlanders to ride Hood River to Sisters before hanging a right and heading down to Eugene in time for the release party there!

I’m anxious to hear about the first person to hike the Pacific Crest Trail and immediately follow it up with a ride on the new ACA Sierra Cascades route in a single season!