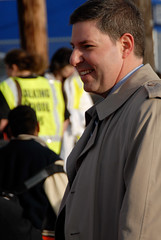 The Portland metro area’s regional director of the Oregon Department of Transportation (ODOT) is leading a charge to raise the profile of transportation safety for all modes.

ODOT Region 1 Director Jason Tell put forth a successful amendment yesterday (download PDF) at a meeting of Metro’s Joint Policy Advisory Committee on Transportation that will fundamentally change how the influential Regional Transportation Plan (RTP) looks at safety. The RTP, a $20 billion package of projects, was supported by JPACT yesterday and is expected to be officially adopted by Metro later this month.

“So, if we’re going to have one million more people move here, are we willing to accept a lot more injuries and fatalities?… I just saw an opportunity to say hey, look, we can do better.”
— Jason Tell, ODOT

Tell, reached at Portland’s ODOT headquarters yesterday, said he was moved to take action on this issue because safety is something he thinks about daily. “I get paged on every serious accident that happens on the region. It’s on my mind daily. I just saw an opportunity to say, hey, look we can do better.”

“Up until now, safety was in the [RTP] plan, but more time and focus was on other things like land use, congestion, and so on. Safety is important and we want to do something about it. The measure I put on the table, and that was adopted, will be a more aggressive goal and say, we’re not going to accept as many injuries and fatalities.”

The first concern Tell addressed was to change the RTP’s safety target away from a per-capita measure. “So, if we’re going to have one million more people move here, are we willing to accept a lot more injuries and fatalities?” Instead of an assumed increase in fatalities and injuries, Tell has put the goal at a net reduction based, to be based on a specific analysis of crashes that happen in the urban region (this analysis is still forthcoming).

As an example, Tell shared goals from the ODOT’s Traffic Safety Performance Plan which calls for a reduction in fatalities from the entire Region 1 area of 120 per year to 85 per year.

“The area that number is from [Region 1] is larger than the Portland metro area, so we still have to figure out what share of that is Metro’s responsibility. As a surrogate [until those numbers are available], whatever share of the Vehicle Miles Traveled (VMT) is in the urban area will be the number we’ll go by.”

In addition to removing the per-capita safety performance measure, Tell’s amendment will also make an important, fundamental change to the safety targets in the RTP. Currently, Metro’s modeling of the safety performance of transportation projects includes only risks to automobile traffic. Tell’s amendment adds biking and walking traffic into that equation. “It broadens the measure from just autos and includes bikes and peds as well.”

At the City of Portland Bureau of Transportation, a similar (and related) focus on safety is coming together. PBOT Traffic Safety program manger Mark Lear cites a number of forces that have coalesced recently, pushing him to come up with more proactive messages and campaigns around transportation safety.

Lear says much of this renewed attention on safety comes from analysis of the RTP by federal transportation agencies. According to Lear, the feds felt the safety components of the plan “needed some work.” Yesterday, Lear and PBOT traffic safety staffer Sharon White put together a meeting to garner ideas and strategies for more proactive approach safety campaigns. PBOT will be looking to fund new communication strategies around biking and walking safety messages in the coming months.

For Lear, and other PBOT staff who work on transportation safety, a renewed focus of resources and attention on the Portland region is necessary and overdue. Historically, ODOT has taken direction from the legislature in Salem, where rural and suburban lawmakers hold a disproportionate amount of influence relative to their burden of traffic crashes. According to the ODOT’s 2008 Traffic Safety Performance plan 46% of Oregon’s 18,409 fatal and injury traffic crashes occurred in Multnomah (4,549), Washington (2,234) and Clackamas (1,679) counties.

“A lot has changed in the past 10-15 years around the safety idea,” Lear said at a meeting this week, “it used to be all managed by ODOT and the answer was always to widen a road or a highway.”

Mayor Sam Adams — who according to Lear “has done more than any other elected official to bring the safety issue to the forefront” — is planning to host a Transportation Safety Summit in early February. Also early next year, a new transportation safety working group will be convened by Metro. Stay tuned for updates and opportunities to get involved.

Can you explain what shifting from a per-capita safety measure to a VMT measure means for cyclists? I didn’t understand this part of the article. My initial impression was that shifting to VMT would mean that, if more people drive more often, we’re willing to accept more casualties (essentially diluting the “impact” of an individual accident) — but I must be missing something. Thanks!

This is great news!

Congrats to ODoT and METRO for taking this initial step. I welcome our local transportation agencies borrowing a page

As a professional working in this field it has often been frustrating to observe how a ‘safety first’ policy often seemed secondary (or tercirary) to concerns about roadway motor vehicle capacity.

And yet on the other hand ‘concern for safety’ often kept older roadway designs/ cross sections from being replaced by more multimodal and slower (traffic calmed) due to higher adoption thresholds for study and adoption.

Such a system for our region might look a lot like what Sweden has been using and promoting over the last decade or so with their “Vision Zero”.

Vision Zero recognizes that street users (operators and pedestrians) make mistakes and design should limit the severity of such vs. just limiting the quantity of incidents. Such a change could give our urban traffic engineers/ planners more tools to use in promoting ‘safety with mobility’ and also help manage our emerging large generation of senior citizen motor vehicle operators (the ‘boomers’) who will not give up the ‘driver’s seat’ as easily as other generations have.

“The biggest changes have been in road infrastructure design. Traditional road design aimed to reduce the number of crashes by widening and straightening roads. But that has no impact on the severity of injuries because vehicle speeds increase.” – Claes Tingvall, Director of Traffic Safety, Swedish Road Administration
http://knowledge.allianz.com/en/globalissues/safety_health/road_safety/road_safety_vision_zero.html

“Congrats to ODoT and METRO for taking this initial step. I welcome our local transportation agencies borrowing a page from other experienced communities such as Sweden.

As a professional working in this field it has often been frustrating to observe how a ‘safety first’ policy often seemed secondary (or tertiary) to concerns about roadway motor vehicle capacity.

VISION ZERO: OPERATIONAL PRINCIPLES:
– At a political level, not allowing traffic to produce more health risks than other
means of transportation or other major technological systems.
– At a professional level, seeing serious health loss caused by traffic crashes as an
unacceptable quality problem of products and services connected with
transportation.
– At an individual level, viewing serious health loss as unacceptable, being aware of
what it takes to create a safe system, and playing an active part in placing demands
on society and manufacturers for safe road traffic.

I had the same reaction as Jeff (#1)- what are the implications of changing the statistical metric? But it sounds like ODOT is headed in a positive direction – it’s long overdue that we stop sacrificing nearly 40,000 people annually on the alter of unlimited mobility.

I agree that section was not clear so I called Jason Tell back and I’ve edited the article based on how he explained it.

Here’s the new text of the article:

=======
Instead of an assumed increase in fatalities and injuries, Tell has put the goal at a net reduction based, to be based on a specific analysis of crashes that happen in the urban region (this analysis is still forthcoming).

As an example, Tell shared goals from the ODOT’s Traffic Safety Performance Plan which calls for a reduction in fatalities from the entire Region 1 area of 120 per year to 85 per year.

“The area that number is from [Region 1] is larger than the Portland metro area, so we still have to figure out what share of that is Metro’s responsibility. As a surrogate [until those numbers are available], whatever share of the Vehicle Miles Traveled (VMT) is in the urban area will be the number we’ll go by.”

thanks for the comments.

I was unclear on the use of VMT as well. I was at the meeting listening to the discussion of VMT being used as a baseline instead of population, and got concerned. But it looks like what Tell has proposed, is to set a goal of bringing the number of crashes down no matter what the changes in VMT OR our population are.

VMT is just being used as a temporary tool to estimate a baseline of what share of the crashes in Region 1 are within Metro’s boundaries until the real number can be determined.

Do I have it right?

Wow! Nobody choked on the $20 million marker someone just dropped on the table?

And I was just beginning to believe them when they said there was no money for an I-5 replacement bridge as there are too many other small projects that could make better us of the limited resources.

And for the record it appears at least one governmental agency has signed on to the 1,000,000+ new neighbors theory.

There goes the neighborhood for those who feel they somehow own it now and have a right to in enforce zero growth.

Can we get some real measurements of bicycle VMT and its relation to injuries and fatalities?

You should call Jason Tell back and ask him if this means ODOT will finally relinquish its bureaucratic and needless control on local speed limits.

If ODOT ceded its authority over local Portland roads, there would a direct and immediate increase in safety.

This is the perfect opportunity for ODOT to put its safety rhetoric into action. What do you say, Mr. Tell?

Shayla #10 +1
Totally agree. Non arterial streets @30kph/18mph would make a lot of sense. If the urban grid is used properly, that change represents a very small change in [driver] commute time for the safety of us all.

this would require an amendment to the statute, and certainly Tell should be pressed to say that ODoT would support a change, but i have not heard any actual push for this from Adams . . .

For ressearch on the effecto fo lowering the speed limit, see this recent Brit. Med. Assoc. report on http://www.bmj.com/cgi/reprint/339/dec10_3/b4469

Regardless of the details of the proposal it’s great to see the importance placed on bike and walking safety. No many cities factor them into thier planning programs