UBI all settled in, will host open house Saturday 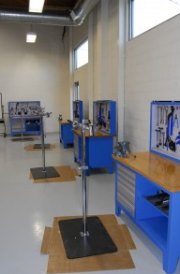 United Bicycle Institute (UBI) is all moved into their new satellite campus in North Portland (they also have a campus in Ashland) and this Saturday they’ll throw the doors open and welcome the community with an Open House event.

According to UBI’s John Baxter, the school — which has taught over 12,000 students from 50 states and over 40 countries — taught their first session back on September 28th. UBI is a state licensed vocational school that teaches courses in bike repair, shop operation and framebuilding.

The open house is a part of the six-week Oregon Manifest and is slated to include facility tours, a garage sale, and a custom bike raffle. Manifest organizers say UBI will raffle off (via $10 tickets) two bike frames (one of them will feature Shimano components, a Chris King headset, and a paint job from Coat) made by UBI instructors and the proceeds will benefit the Community Cycling Center’s Holiday Bike Drive.

Those heavy Park workstands are sooooooo yesterday, since the arrival of the super-thin wall tubes.

Hey, looks like a first rate facility to me. I’d be more than happy to have them teach me how to use the “tools of the trade.”

Clamping work stands, still work. since the advent of thin wall and carbon fiber there are a number of adapters available to allow the adapter to be clamped and not the frame.

The alternative is to use the pro style stands which hold the bike by the front fork and rear wheel. These stands make it difficult if not impossible to work on brake issues and wheel alignment issues because there’s no front wheel and you can’t rotate the rear wheel.

And yes people pay to learn how to properly repair their bikes, as well as the correct tools to use for the job.

Welcome! Its great to have an organization like this here. The more people that properly learn the craft the better.

And apparently we need a charm school in Portland too…