This 7.2 mile stretch of the Springwater should be much smoother by summer 2010.
(Map: City of Portland)

A project to repave the popular Springwater Corridor Trail that was green-lighted by Metro back in March is now scheduled for completion by early June 2010. The $1.8 million project will overlay asphalt on top of the original rough chip seal surface for over seven miles of the trail from the east end of the Union Pacific Railroad Bridge to Jenne Road. The project was part of a $38 million pot of funds from the federal economic stimulus package. 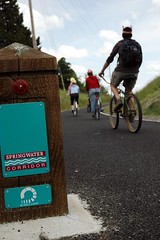 Back in March, Kyle Chisek, a project manager at the City of Portland Bureau of Transportation, said construction would begin this past summer and would be completed “a couple of months” later (as in right about now). I followed up with Chisek this morning after a reader wrote in wondering why the project hadn’t started yet.

Chisek said it comes down to all the paperwork (inter-governmental agreement between Transportation and Parks departments, environmental assessments) and process (approval from ODOT). According to Chisek, Portland Parks and Recreation (PP&R) “Really underestimated the time it would take to get through the federal process.”

PP&R spokesperson Beth Sorensen said construction is currently slated for mid-March (it would have started this winter, but asphalt projects need dry weather). Sorensen also said that “for safety reasons” sections of the trail will be completely closed during construction. A detour plan will be created and so far, the schedule for the closures has not been released.

Oh hallelujah. I was starting to develop a very special level of hatred for the springwater trail because of that washboard surface..

The problem isn’t the chip seal it’s the settling of the current overlay on the rail bed causing uneven pavement.

I doubt just laying more asphalt on a poorly prepared road bed will resolve the issue.

Much like chip sealing roads doesn’t get rid of the existing potholes and cracks.

That surface is annoyingly bumpy because of tree roots. How is repaving the trail going to stop tree roots from creating the same problem again?

Good news. The surface is not good and it’s more than just a matter of a few tree roots.

I don’t think it’s tree roots. It’s too regular – I believe they did a poor job of filling and compacting voids from the old railroad ties. I’m not sure they even removed them in some places – the may have paved right over them and as they’ve decayed the surface above has sunken and formed that washboard texture.

Seem to be a few surface/paving experts on this blog. I’m content to leave it to the professionals to determine the viability of repaving. One would hope people more expert than us have been consulted on this project. Or do we not trust that is the case?

believe Dave is right, where there were RR ties, the sub was compacted from RR use.
laying a thin coat of gravel to form a base for asphalt merely allowed the already loose sub to sag more than the RR tied areas.

Divert one of those interstate resurfacing/repaving machines to the Spingwater trail.

Sure it’s large, sure it’s noisy, sure it’ll likely belch out huge quantities of foul smelling tar.
But it would likely lay down the entire width of the trail in one pass, cost less and should be able to get done in 2 or 3 days tops.
Less time it’s out there the less time neighbors have to complain about smelling tar, seeing manual laborers(that offend their sensibilities) and having all those cyclists diverting through their idyllic little fiefdoms neighborhoods.

Poor original surface prep, dynamic tree action, detours during repaving – whatever. I’ve always exulted whenever I get the chance to ride its length since its worse parts are still preferable to alternatives.

Glad it’s being maintained. Be happy, fellow cyclists, that whatever else the Springwater is, it is indeed a PBOT project – recognition of bicycling’s status as legitimate transportation.

Would that a little of that stimulus funding had gone to sussing out a way to streamline the approval process, which would then be applicable to other projects!

I am sure they will do a good job. The only reason we are even noticing the rail ties (or whatever is causing the surface) is because it has never been repaved in the 18 years it has been there. Any road surface would likely be as bad.

Actually 18 year of low impact traffic such as bikes and pedestrians shouldn’t have had such a big impact.

Look at how the sections outside of Portland have not deteriorated at the same level. Notice how those sections of the trail used better quality materials.

Not sure if they did better prep work on the road bed but it appears that they did since they are not suffering the same deterioration.

I ride it every day to and from work. I’m happy they are doing this, it will undoubtedly be a big improvement. Thanks!

I’m just glad they’re finally getting around to doing this. Now if they would only pave that last little stretch out to Boring…

Anonymous (#2) – That depends. If the trail has finished settling, then laying asphalt over the top will be fine, and pulling up the entire roadbed could be worse due to settling after the new roadbed is laid. If the trail isn’t done settling, then your concerns are very valid.

Dave (#5) – and if that’s the case, then there will be further problems as they continue to deteriorate.

General comment – I think PP&R is still underestimating the time. Mid-March? Portland continues to get rain through April and May most years. This project could end up starting in mid-May and ending in early September. I hope Good Sport Promotions and other organizers who run rides down the Springwater figure out alternate routes for the Portland Century and other rides which use the trail.

ggw (#13) – it’s coming, in about 1-2 years. Metro approved the project. Now if they’d just start working on the Boring to Barton stretch, then we’d really have something.

Awesome! Thanks for the update!

As I recall the original surface was not asphalt, but a different aggregate intended to let water seep through (could be wrong but I think it was even touted as being more environmental?). I am NOT educated on paving, but if water was getting into the gravel underneath it might explain why it settled into the “railroad tie” pattern of bumps we have today. Hopefully doing an asphalt overlay will result in a long lasting, smooth surface.

The original Springwater trail from SE 28th Ave to SE Jenne Rd (Gresham city limits, I believe) had sub par pavement from day one imho. For some reason the cheaper chip seal surface was chosen at the time, perhaps due to budget constraints, or because whomever had final say wasn’t fully aware of how horrible it is.

A test section with about five different pavement types was set up in the stretch between SE 92nd and I-205 in about 1993. When trail paving started back then, I remember thinking at the time, why did they choose one of the worst types of pavement?

The Springwater trail between SE 82nd and 92nd was repaved with a smoother new surface a year(?) or so ago, making a huge difference in riding speed. About 1 – 3 mph faster due to less rolling resistance. It’ll be great to ride on smoother pavement over the rest of the trail. That’ll make it a definite world class link between Gresham and downtown Portland.

This is great news! I may be lured back to riding it, if they make it as smooth as the section between SE 82nd and SE 92nd. But I’ll believe it when I see it!