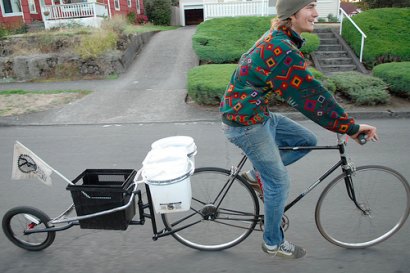 The other day on my ride home from the grocery store, a man pulled alongside me towing an interesting trailer. Upon closer inspection I realized it was made completely out of used bike parts. I was sufficiently intrigued and, after snapping a few photos (that’s why I always keep my camera in my front basket!), I asked if I could follow him home to learn more.

Turns out the guy, whose name is Johnnie Olivan, lives just a few blocks from me in the Piedmont neighborhood of North Portland.

Olivan moved to Portland back in January after hitchhiking and biking through the Netherlands with his girlfriend, Paige Common. Olivan comes from what he calls a “welding family” and also works with Delia, a metal furniture production shop and studio a few blocks away (they have welding classes if you’re interested). 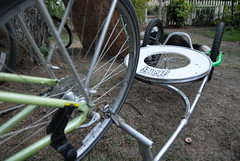 About a month ago, Olivan — along with Paige and friends Mat Heitel and Boris Genovker — formally launched Rejuiced Bike Concepts.

Rejuiced makes several different models of bike trailers. What caught my eye about them is Olivan’s creative and ingenious use of used bike parts. The right angle bar that leads to the trailer hitch? A bike stem. The trailer’s main stanchion bar? A handlebar. The cargo platform? A bicycle rim with a wooden overlay. The rear wheels? They’re simply left in their forks and welded on.

Olivan has a production-ready single-wheel trailer as well as more traditional, two-wheeled versions. He also has a kid-sized trailer (which I loved) and he’s beginning to work with vinyl coverings.

Rejuiced has been spreading the word about their products at Last Thursday on Alberta and plans to have a booth and display at the upcoming Sustainable Shift event.

Learn more at RejuicedBikeConcepts.com or drop them an email at trailers[at]rejuicedbikeconcepts[dot]com. For more photos of my visit to Rejuiced HQ, check out the slideshow below…

Brilliant & beautiful re-use. Toss some foldability in there, tack on a rear strobe mounting tab, and I’m in line, Johnnie.

I’m a fan of Rejuiced trailers for a couple reasons

* each one is different
* each one has its own version of a consistent style theme
* small, light, functional
* tie-downs for the load
* made from bike parts
* attractive and cute

They’re a good addition to the Portland scene. They fit into the Portland bike theme of “my bike is functional, unique, and attractive.” If we get a couple hundred Rejuiced trailers on the streets people will be much less inclined to drive to the grocery store.

BTW, Johnnie & co. were building these at the Lotus Seed/Bike Temple all summer, then they moved to their own shop in September. They also have a “group bike” that seats a couple pedallers, has a big platform in the middle for dancing/surfing, and a big sound system. I think if was a regular feature on Alberta St. in July & Aug.

Yep. I need to learn welding.

Trailers are a necessity if your going to abandon your car. No need to buy an extracycle, trailers help you utilize the bike you already have. I’ve used a trailer for 20 years, it’s the way to go. Good luck Olivan, we need locally built trailers to go with all the locally built bicycles.

Dude should wear a helmet in his photos to appear more legit/professional but whatever.

Best of luck to him!

I like it. Thumbs up to Rejuiced Bike Concepts. Keep up the good work and ideas.