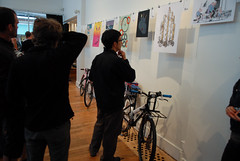 The latest evidence of the intersection between bicycles and Portland’s First Thursday art scene (remember the handmade bike show back in August?) was on full display at the debut of the Artcrank Poster Show last night.

29 Portland artists were part of the event and each of them hung one bike-themed poster, all of which were for sale for the reasonable price of $30. Of that $30, $25 went to the artist and $5 went to local non-profit Bikes to Rwanda.

The event took place at The Cleaners at Ace Hotel on the corner of SW Stark and 10th. It would be hard to imagine a better location for a show like this. As large crowds enjoyed the art inside the gallery, right outside the windows an on-street bike corral and the new buffered bike lane on Stark overflowed with bikes and their riders.

Artcrank got its start in Minneapolis (the city sitting #2 for percentage of bike commuters, right behind Portland) in 2007 and has now expanded to five cities. Seeing the energy and enthusiasm of the crowd last night, it’s easy to see why it has enjoyed such success. 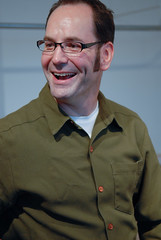 The director and curator of the show, Charles Youel, was busy all night but I managed to chat with him for a few minutes in between handling poster sales.

Youel works in the art design side of the advertising business, and he’s also a big bike enthusiast: Artcrank sprang out of an attempt to connect the two. “The show was a way to get together with my art design friends and my bike friends, who happened to usually be the same people.” The show is still just a hobby for Youel, and he doesn’t profit from it at all (local sponsors pay for his travel and accommodations).

The Artcrank show in Portland was put together in just two months — half his usual lead time — but Youel said the quality and volume of artists in this show is the most impressive he’s seen. Youel also noted that unlike shows in other cities, sales of the posters were balanced. “Usually we have a few of the posters that sell much better than others, but what I’ve noticed here in Portland is that nearly all the posters are selling well.”

UPDATE: Youel says so far, the event generated over $6,000 in sales.

Youel and I chalked up the balanced sales to possibly a sign of the depth of artists in Portland or perhaps the diversity in tastes of the audience. Either way, Youel was very pleased with the turnout last night and said he plans on making Artcrank an annual event in Portland.

The show was one night only, so if you missed your opportunity to purchase these excellent prints, you can find links to the artists on the Artcrank Portland website.

For more photos, see our gallery or watch the slideshow below:

So nice to actually see an art show AND be able to afford it.

Nice work to all involved, luckily I was there early and picked up two prints. Heard it got packed later and was a big success. Lets do it again soon fo sure.

A big thank you to Charles and everyone that attended. It was great to catch up with so many folks in one night and with such an amazing collection of talent. -Thank you.