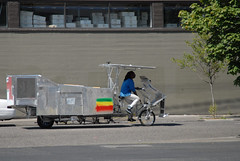 This morning I looked our office window and saw a familiar bike pedaling by. It was Brian Campbell and his massive motorhome/camper bike. A few minutes later he had swung around and parked for a quick chat.

It’s been almost three years since I first shared a Portland sighting of Brian Campbell and his amazing camper bike. Then, back in August 2007, I shared the sad news that his home had been destroyed. Initially reported as the work of vandals, it turned out Brian did it himself in a bout with depression and frustration. Years of living on the street had caught up to him. 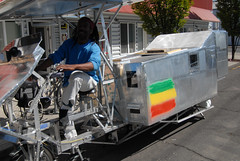 After I shared his story, the community responded big time. Brian wanted to rebuild his bike and his life and BikePortland readers raised nearly $1,000 in just a few days. With the money in hand, I took Brian to the hardware store and helped him load up on supplies. After a work party, he spent the next few weeks parked in front of our house on N. Michigan, working long hours to build a new, improved, and more spacious bike home.

After several more weeks, his creation was road-worthy and it was time for Brian to move on. 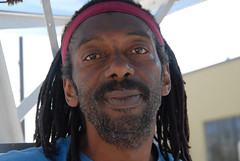 Since then he’s built several other motorhome bikes (including one for local tall-bike riding performer Dingo the Clown), but sales have not been brisk enough to get off the street.

It was good to see him this morning. He told me he’s looking for work at a bike shop and he hopes to get some steady income. He dreams of building bike homes for others in hopes of a fully human-powered future. He also talks about a revolutionary, electricity-generating invention. But I think he knows both of those enterprises won’t get him off the streets any time soon.

Brian needs some help, but I’m not sure how best to give it. People love his bike-motorhome creations and he draws a crowd wherever he goes. But a person needs much more than just curious onlookers to stay sane and healthy. I hope Brian stays well… until next time he pedals through.

— Check out our “Brian Campbell” photo tag for more images of Brian and his bike (including the rebuild).

I have met Brian, a nice guy but needs mental health counseling. You can’t force people and he is talented but unfortunately needs more that just platitudes on this website and I am not chastising Jonathan, he brought this story to light and has really tried to help the guy, but he needs more than just donations, I would hope there is somebody who reads this who can help get Brian some real help if he wants it.

I had the pleasure of meeting Brian a couple of years ago when I delivered some aluminum to him for his bike.

One of the most fascinating things I learned about the bike was his incorporation of a flywheel to help him up hills (“especially out on the coast” he told me). As more and more cargo/utility bikes are becoming part of our transportation options one can’t help but wonder if Brian’s flywheel technology would be helpful for bikes that have to move heavy cargo around town on a regular basis.

One of the nicest people I’ve met on two wheels and I wish him the best of luck.

Thanks for keeping us updated Jonathan!

I believe I spoke with Brian a few years ago in Creswell, I was facinated by his motorhome. Perhaps there would be an opportunity at the new bike building school on Vancouver and Williams?

I had the misfortune to have spoken to Brian one early morning and he was extremely rude and ignorant. By the way things went I would say he has a screw loose somewhere in there… must fix that Mr Brian!

“By the way things went I would say he has a screw loose somewhere in there… must fix that Mr Brian!” efglez

Wouldn’t it be great if life were that simple? I can just imagine how great his health plan coverage might be. The U.S. needs health care made available to all of its citizens. That takes recognition of priorities and commitment to spending money in the right place.

If someone that knew him were really concerned about his mental being, they might find a way to tactfully bring up the subject and possibly let him know about available help. Maybe he’s already been there and found the options aren’t so good.

He’s at least significantly self sufficient and also in possession of a talent for practical engineering. That’s got to be some consolation for him. Maybe he could do much better if he had some issues squared away…?

Incorporation of a flywheel??? Is there any more detail known?

I met Brian for the first time a couple weeks ago on a sunny afternoon, near 28th and Burnside. Saw the bike transporter and had a nice chat with him over a beer. He was considering his next move, since the house he was parked in front of was going to be sold. I sensed his frustration about having to move, and about his situation in general.

Brian reminds me of a lot of people I’ve met over the years. Very smart and intelligent, and yet listening to a different drummer. Doing such can be both liberating and debilitating, depending on ones financial situation.

I can understand the “bootstrap” mentality that a lot of people have when it comes to people down on their luck. People like to think that if they were in their shoes they would have the drive and wherewithal to pull themselves up. Yeah, sure. So easy.
I suggest those people read “Outliers” by Malcolm Gladwell. Sure, you can pull yourselves up by your bootstraps…when someone gave you those pair in the first place, and taught you how to do it efficiently.

Be kind to those on your way up. You’ll probably meet them again on your way down. In this recession, that’s a real possibility.

Is Brian a welder? There is a lot of buzz in Portland for cargo type bikes, but welding skills would be essential. Anybody willing to take a chance on an internship with Brian?

Raising a thousand dollars was a great effort. It’s a start. But to be effective, a person has to have a place to create and work.

Perhaps Shop People on Oak and Grand could goodwill a month or two to get him started? (co-op prices are about $180 a month). Portland is a town that has opportunity if you are willing to volunteer/intern, and it’s a great way to meet people.

I’m intrigued by the way he’s designed this bike camper. I’d love for him to be able to make homes for the homeless or the nomadic adventurers. Pity they can’t be subsidized for the people who can’t otherwise afford these bikes but would benefit the most from them.

Thanks for sharing this, Jonathan.

But, to piggyback a bit on what wsbob said, there is a very real chance Brian has tried to get help. But, unfortunately in Multnomah County, none of the community mental health agencies are going to work with someone unless they have Oregon Health Plan. The only way to get this for a single person with no dependents is to receive SSI (Supplemental Security Income). If someone has worked for a while and are getting SSDI (Social Security Disability Income), he is going to get Medicare and none of the agencies want to work with him either. I work in the mental health field and that is how I know this.

So, it is very possible Brian has tried to reach out and get help, but was told he did not qualify. Bare in mind some of the cultural considerations as well. The US’s mental health system is geared toward white, middle class values and some (not all) minorities are intimidated by the process and can even view it as a major sign of weakness. Dare I mention the costs of some of the medications people have to take in order to be “well” or “normal?”

One possibility would be for him to work with the Dept. of Vocational Rehab. If it feels what he does has the potential to provide steady income, it could provide some capital to get it off the ground. Or it could help a bike builder hire him so Brian can utilize his talents.

Whatever his difficulties, I am glad to see that he’s still kicking it out there. Like Jonathan said, he draws a crowd wherever he goes… And his innovation, creativity and self-reliance are admirable. It always puts a smile on my face when I see him or his camper, and I know many others feel the same way.

I’m pretty sure that my friend and I bought him a beer at Plaid during Pedalpalooza. I always get jealous of the minimalists as I gaze over my crowded workshop.

buzz, thanks for offering further insight into obstacles Brian might be facing, or have faced in the past in his efforts to resolve personal issues he himself and others have noted. Counseling, programs, medications; long and short term, cost lots of money.

Having to meet complex, conditional qualifying criteria to access those important services mean simply that a lot of people that might benefit from them are, for various reasons, not going to get them. When they don’t, it’s not only the quality of life of the individual that suffers, but the quality of life of our community as well.

I hope Brian can soon get good answers to some of the more pressing questions he has on his mind.

I don’t think “mental health counseling” is what Brian needs. I think if Brian could feel secure in having quiet regular sleep and a gratifying sense of purpose, and nourishing food, he’d be just fine.

Im wondering if there was anyways Brian could Make up some plans for the Bike RV?
U have my permission to Give him my Email.
In Kilted Freedom,James R

why is it when someone is different or gifted that are labeled a nut?.fail.

i think most things in this world today are totally nutty now.where did the good summers and blue sky go?.

I spotted Brians 1st generation bike, which he called “The Beast” when he lived in West Chester PA in 1991. He built it in a welding shop. One day, the cops harassed him as he rode up Paoli Pike?, cars piling up behind him during rush hour – and said he needed a license. Its a bike, not a car man!, hed say. He kept saying “the East Coast is BS man, Im riding this thing to California.” We tried to imagine him getting over the Rockies. (that flywheel must work!) We never thought he’d do it. He crashed on many friends’ couches. Always wondered what happened to him. Glad he made it out of town. He wouldnt recognize the place now. too upscale and uptight now. Stay out there – not missing much here! God Speed from the old hippies on Miner Street brother!

Where is he now? – he has talent