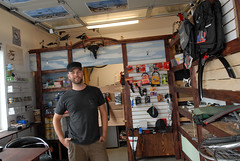 When 30-year-old Edwin Skaug realized convenience stores aren’t exactly convenient for people who ride bikes (they typically lack bike parking and they don’t sell any bike essentials), he figured he’d open one up that was. The result is his new business — A Convenient Cycle. 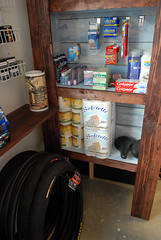 For when a toothbrush and tires
are on your list.

Edwin’s new shop — which officially opens for business this morning on 833 SE Main — is part bike shop, part convenience store. To Edwin, it’s all about helping out fellow riders. He sees the shop as a “pit stop” where folks can roll in, borrow a tool, grab a set of brake pads and a bag of chips, and quickly be on their way.

Alongside a new set of tires and other bike accessories, you’ll find toilet paper, batteries, toothpaste, and munchies — all neatly tucked into a compact, 300 square foot space.

In addition to basic bike commuting and personal hygiene essentials, Edwin is an ace mechanic who can also do bike repairs and tune-ups (but only by appointment, since space is limited).

Edwin has lived in Southeast Portland for five years (he’s from Spokane originally) and according to him, the original idea was to try and get a grant to install more bike parking at local convenience stores, but it seems his entrepreneurial spark got the best of him.

This little store isn’t the only thing in Edwin’s plans. He’s also got an old Dutch cargo trike which he plans to load up with cycling sundries (while his girlfriend minds the store) and set up shop at various high bike traffic locations (unfortunately his plans are on hold while he works out permitting issues with the City of Portland).

A Convenient Cycle is located in the Activespace Building at 833 SE Main Street and will be open Monday-Friday from 7:00am to 4:30pm.

Edwin says he’ll be serving free morning coffee for the next few weeks, so stop on by and pay him visit.

Too bad this won’t be open after work or later hours- that’s when I need bike essentials most often and that’s when the bike shops are closed!

I love that it’s open before work, though. The number of times I could’ve fixed a flat before work if only I hadn’t forgot-to-restock-my-tubes-last-time but no shop was open are countless. Instead, I defeatedly take transit and get a tube at lunch.

Nice guy, and he makes a fine cup of coffee too.

awesome! Will be checking out this new buisness and getting a few bags of chips

Charlie (#1) is right on. We need bike kiosks/trikes out at “various high bike traffic locations” (e.g one end of the Hawthorne Bridge) between 6-10am and 4-11pm. Supplies during major commuting and recreation/training hours would be fantastic. Still, a bike convenience store is a great idea.

Man, at this rate that whole ActiveSpace on Main is going to be nothing but bike-related tenants by mid-2010 🙂

Yeah, should definitely stay open ’till 6pm to catch the people coming back home.

I agree with those who say he should stay open later.
In fact he could probably shut down from 11am til around 2pm and then re-open. European hours!!!

I had the pleasure of meeting Edwin yesterday. Great guy with a great idea. I m looking forward to stopping in this week!

Here’s a cool idea: bike vending machines located along established cycling routes. They do need electricity, but they’re cheap to operate and run 24 hours/day. Throw some tubes, energy drinks, and snack foods in them.

Open until at least 7PM! Please!

But, the main times I’d need Bike Convenience is not when I’m at my desk job.

I gather it is the same for lots of bike commuters who work the typical 8-5 slog.

Perhaps he’ll be doing his convenience-cargo-bike thing at the end of the commuting day? He could probably just pedal it over to the Hawthorne Bridge and make a couple hundred bucks.

This is just all kinda cool. That’s Portland for you, attracting the best and most innovative.
Kudos to you Edwin and I wish the best of luck to this venture.
I’ve often been bothered by the lack of parking at convenience stores (though the one at NE 28th and Glisan has bike racks)

Brilliant idea. In China they have the sort of newsstands you see on sidewalks in Manhattan or Chicago, only they’re crammed inside and out, floor to ceiling, with bike accessories, tubes, tools, spare parts, instant noodles, etc. And they’re operated by mechanics who don’t know they’re mechanics but who can fix or replace almost anything in 5 or 10 minutes, while you wait. These bike shacks are all over the place. Good luck, Edwin. And I second the idea of staying open late for the evening rush hour.

Good morning everybody! Edwin and I want to thank Jonathan for a lovely article and everyone here for their enthusiasm and feedback. Rest assured that we’re exploring the best hours to serve the biking community and lower eastside while we get the shop situated. I want to emphasize that the challenge at this point is finalizing the permits for the bakfiets service through the City of Portland; once that is cleared out of the way keep an eye out for the convenient cycle on your commute. Sorry, we gotta wait for the permit to clear before we can announce where that will be. Follow us on twitter if you’d like to keep updated, or email us if you would like a followup. Also, our shelves will carry unconventional convenience store items like soymilk and other healthier items for our patrons. Also, if there are local portland businesses who would like to consider the option of consignment in the store, please email us to begin a dialogue! We would like to promote local business in our space. Finally, on a personal note, I must say that it’s been exciting for me to watch Edwin restore the bakfiets from – literally – a box of aged metal parts into a beautiful cargo trike, which inspired this great adventure. Thank you again. Ride on, and ride safe. — anna

I am Edwin Skaug’s little brother and I am so proud that he opened his store! You couldn’t find a guy that knows more about bikes in all of Portland, he assembled that trike himself.

I saw Mr. Skaug this morning on SE Clay near 7th — great idea, and now I’m sorry I didn’t stop to chat and see what he had to offer. Next time, I definitely will.