Oregon Cycling magazine shuts down; new owners look to bring it back 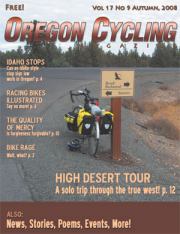 Oregon Cycling magazine — a free, newsprint publication that covered bike news, racing and culture throughout the state — will no longer be published. But according to sources — and a job listing on Craigslist — it might be already set for a comeback.

Oregon Cycling had been published since 1987 and was owned by the Center for Appropriate Transport (a Eugene-based non-profit) since 1992. In June, Editor Karl Benedek wrote on the magazine’s blog that the changing media landscape had brought tough times onto the publication, forcing them to close their doors. “The last few months have been rough, and we are no longer able to produce Oregon Cycling as a labor of love.”

Saying that competition with online information sources put the viability of a print magazine (which he called “an anachronism”) into question, Benedek wrote that “Despite everything, the decision to shutter Oregon Cycling was a difficult one.” Benedek also hinted that he would like if someone would “take the reins” and “breathe new life” into the publication.

Now it looks like Benedek has gotten his wish.

On August 3rd someone posted to Craigslist looking for an “Editor to publish a 23-year old bicycle magazine”. The listing said the person must be “connected to all aspect of cycling community in Portland and statewide.”

According to sources, the job has been filled. So far, I’ve been unable to reach whoever’s behind the new magazine. From what I have learned, Jan VanderTuin from the Center for Appropriate Transport is no longer involved and new owners have taken over the magazine.

It will be interesting to see what comes from this.

All the Best Folks!

I was saddend to read in the last issue that it was their last issue… I’m looking forward to the re-launch!

I used to work on Oregon Cycling at CAT in their charter school program. It was a great program, and I have them to thank for teaching me to use Photoshop and Illustrator. Here’s hoping that the magazine can continue with it’s new publisher.

For several years I wrote a monthly tandem column called “Side Trips”. It was a great experience.