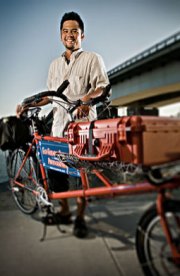 Eight years ago, budding photographer Russ Roca’s pickup truck died. A curious and eco-conscious guy, he wondered if he could get by living in Los Angeles without a car. Turns out he could. It changed his life, and it also saved him enough money to buy more camera equipment. His career — and a new perspective on life — began.

Roca, a bicycle-based professional photographer, part-time bike advocate, epicurean cyclist, and talented multimedia journalist is coming to Portland. Roca and his partner, jeweler and metalwork artist Laura Crawford, will begin a global bike tour after a train ride up to the Rose City. The pair have sold most of their possessions, moved out of their apartment in Long Beach, California and have started The Path Less Pedaled project, which they say has, “the goal of connecting with and collecting the stories of people who followed a calling to live their lives in unique ways.”

I lived in Long Beach for many years during my childhood and my family still lives a few miles from there. Back in December 2007, I met Russ during a visit to Long Beach. He’s a very talented guy who I think has a lot of shared interests and experiences that some of you might enjoy hearing more about (for instance, he just published a photo book of his bike-camping journeys to Central California and he’s loves sharing his tips on the latest tech tools and camera gear). 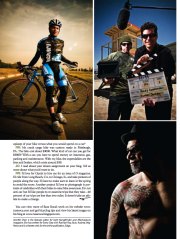 Roca was featured in the
July issue of Rangefinder Magazine.

When Russ announced he’d be starting his new journey in Portland, I thought it would be a perfect opportunity to share his insights and talents with the community.

I know it’s last minute (as in this Monday, 8/3) but we’re putting together an event called, An Evening with Russ Roca. The basic idea is for you to come and see some of Russ’s work, hear his tips on photography and blogging/tech gadgets, get his perspective on the bike movement in Long Beach, and learn more about his ambitious upcoming bike tour. I’ll lead a one-on-one conversation up on stage with Russ and we’ll have plenty of time for Q & A.

See more of his work and learn more about Russ at:
— RussRoca.com
— PathLessPedaled.com
— Russ’s Flickr Photostream
— The Epicurean Cyclist blog

Sounds fun! I’ll see if I can make it…