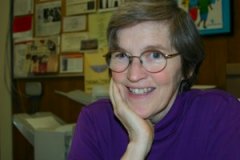 61-year old Portland resident Bonnie Tinker, was killed yesterday while riding her bike on the campus of Virginia Tech.

Tinker was attending a Religious Society of Friends conference when the incident occurred. According to The Roanoke Times, she was struck by a dump truck and died on the scene. The Oregonian reports that the crash was a right-hook. The collision is under investigation.

Tinker was very well-known in the Portland community and was the founder and executive director of Love Makes a Family, Inc., a Portland non-profit that works for marriage rights for lesbian, gay, bisexual and transgender couples.

A friend, writing about Tinker’s death on BlueOregon.com, wrote:

“She worked so very hard, and there was no doubt that she cared deeply, passionately and thoroughly about what she did. She devoted her life to the work of queer rights and peace.

Tinker was a member of the P.O’d Grannies and according to The Oregonian she was arrested in 2008 for protesting at the downtown Portland Armed Forces Recruiting Center.

For details on upcoming memorial services, stay tuned to the Just Out blog.

A real loss.
May her work and her memory be a blessing to us all.

That’s just terrible. My thoughts are with her family.

This is absolutely a devastating loss to the Portland area. In addition to the many contributions Jonathan listed, Bonnie Tinker was instrumental in the early years of Portland’s Bradley-Angle, one of the first domestic violence shelters on the West Coast.

My condolences go to her family members, and to the community of people here who worked with her and will miss her leadership and energy.

Terrible to see someone killed while riding a bike. My thoughts and prayers go out for her family and friends.

One correction worth noting above. The crash happened at Virginia Tech–not the University of Virginia (2½ hours away by car)

i think i’m gonna be sick

A sad note to the holiday weekend, but may her example help us in the good fight.
Be safe, everyone

Bonnie will be missed in the community of Friends and beyond. My condolences to her family.

I feel a painful loss, leaving a gaping hole in my fabric of Portland. She wasn’t always easy, but she was often right. I remember her seriousness: the thought and effort, the dedication she applied when something mattered to her. I remember her well informed sharp intelligence and the integrity of her character. My condolences to her family, friends, and all of us whose lives she touched.

What horrible news! You will be greatly missed, Bonnie! Thank you for working so hard on ensuring the rights of Oregonians.

Bonnie was an inspiration to many, for many years. This is tragic.

My condolences to Bonnie’s family and friends as well as to our community.

Our community has lost a very energetic, compassionate leader and guiding light.

My thoughts and prayers are with her family and friends.

Bonnie touched my life in many ways. As a child I went to Love Makes a Family and it was an amazing way for me to meet and play with kids who understood me, and a great place for my mom to find unconditional support and acceptance. Thank you, Bonnie.

I did several protests with Bonnie and met many of her friends at her 60th birthday party a year ago last may.

Here’s a picture of her in a local theatre event called “The trial of G. W. Bush”
http://jrowe.home.igc.org/bonnie.jpg

This was a right hook murder. Big truck on a deadline, low paid driver, passes cyclist, then a second later slams on brakes and crushes cyclist with a right turn. That is how Bret was murdered here in Portland.

The local newspapers need to check the driver’s record, and whom she/he was working for.

Back to Bonnie. She and many of us protested the Dupe of Earl Blumenauer for years. The play was written in 2004 and predicted much of what has come true. Pelosi knew about torture. Our group of leaders could not speak about IMPEACHMENT or call Bush guilty because they gave Bush the green light.

While all the bike lovin Earl fans were drinking his KOOL-AID of lies, Bonnie and her friends were speaking the truth, and working on many positive causes.

RIP Bonnie, what you have changed will long affect the world in positive ways.

I was arrested with Bonnie and her son Alex during a demonstration in 2006. She was in incredible person, and inspired all around her. She taught me a lot in our limited interaction, and she will be missed intensely by this community.

Does anyone have any information about her memorial services?

We both spoke at the Environmental Law Conference in Eugene. What spunk! She was perpetually unaccepting of other’s lameness and she will be missed.

I met her once as a young person starting a Gay Straight Alliance at my high school. I believe she said she’s related to the famous Tinker v. Des Moines case, so she comes from a protesting family. I am glad to have met such a dedicated activist.