How PBOT plans for bike corrals As we’ve been covering with regularity in recent weeks, the City of Portland Bureau of Transportation has been busy installing new on-street bike parking facilities. Known as “bike corrals,” they have proven to be very popular with the community and with business owners.

Each time we cover a new installation, many people wonder how a specific spot was chosen over another. I’ve talked to several business owners that have been frustrated at the time it takes to get one and/or by not even being considered for one at all.

At Biwa in Southeast Portland, owner Gabe Rosen has resorted to having customers fill out comment cards and sign up for an email list to petition the City to put one in front of his restaurant.

PBOT installed the first bike corral in September of 2004 (in front of Fresh Pot on N. Shaver at Mississippi). They went two years before installing another one while they worked on funding, policy, and design issues. With all that worked out, since last fall PBOT has put in 15 corrals throughout the city, with the two most recent ones just completed yesterday. 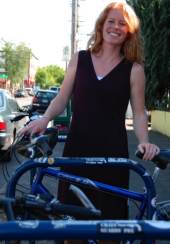 According to the PBOT staffer in charge of the program, Sarah Figliozzi, they currently have over 60 businesses requesting corrals and they have 150 location suggestions on file (mostly from comments received at Bike Master Plan open houses).

Businesses are clamoring for these facilities for many reasons; they improve the pedestrian space by getting bikes out of the way, they increase parking capacity, they improve visibility, and so on. In addition, PBOT now has funding to pay for the facilities, a change from previous policy that required business owners to foot the bill (about $2-3,000) themselves.

Another policy change that Figliozzi says they’ve made is that they no longer serve requests on a first-come, first-serve basis. Now, she and PBOT staff are tackling entire commercial corridors at the same time. Figliozzi says this new approach takes more time, but makes her planning efforts “more robust and efficient.”

Figliozzi has dealt with her share of disappointed and impatient business owners, but she feels that PBOT has an obligation to understand the entire business district’s transportation needs on a whole, instead of just responding to individual requests.

The commercial corridors Figliozzi is currently working on are SE/NE 28th Ave. between Glisan and Stark and NE Albert Street.

So, if you want a bike corral and you’re on a commercial corridor, PBOT then assesses the bike parking demand. Figliozzi says this isn’t as easy as it seems.

“Demand needs to be apparent,” she wrote to me via email, “but latent demand is also a factor.” On that note, she pointed out a recent corral that went in at Dragonfly Cafe in Northwest Portland. There was only one staple rack in place, but after the corral went in customers now fill 12 bike parking spaces.

But Figliozzi warns that latent demand “can’t be overly emphasized.” She said she gets many requests from businesses with no bike parking whatsoever and show no obvious existing demand. Figliozzi says it’s “fantastic” to see this type of enthusiasm, but that it’s also, “not justifiable to use City funding on these locations where one or two racks will meet demand.”

Figliozzi says that in the future, she hopes the City will have the staffing resources (needed to install the racks) to be able to offer businesses the option to pay for corrals themselves at low demand locations.

Once there’s a clear demand, the City moves forward with the request (and as requests pile up, Figliozzi says so does the lag time in processing them). A key part of the process is to get a signed “Maintenance Agreement”. The business adjacent to the bike corral must ensure that the facility stays free of debris. It’s an important consideration, because once the corrals go in, the City can no longer sweep the street.

Figliozzi has been making the rounds to neighborhood and business associations to explain the process and the benefits associated with the corrals. She also says PBOT has finally put more information about on-street bike corrals on their website.

I’d be curious to know whether business owners can get a bike corral installed quickly if they offer to pay the entire $2-3k. I understand the longer decision-making process for use of city funds, but if someone *really* wants a bike rack, and they’re willing to pay for it, will the city still come out and install it? Also, are there any private contracting companies that would install if all a proprietor needed was city permit approval?

A few years ago, after waiting many months for the city to install a single staple we requested, I ended up buying and installing one on my own (with a permit). It ended up costing me around $250 + my time. It has been used by customers (and the coffee shop customers next door) nearly every day since then.
If/ when we move, the staple we installed will likely be coming with us.

One of the other nice things about these racks installed near places with outdoor seating is you no longer have to suck down exhaust while eating dinner!

As many folks know, the twin corrals on Belmont have been hugely successful, by all indicators. As the Sunnyside neighborhood rep. on the Belmont Business Association board, I have fielded countless calls and inquiries about more corrals in this area over the last two years.

I think PBOT is doing the right thing by stepping back and taking a broader look at the various business districts, to see how ALL the businesses can benefit from this infrastructure … not just those making the most calls.

Of course, they LOVE PLANNING, but at least they are putting rubber to the road by following through with installations. The latest designs are clean, functional, and less expensive.

I encourage other neighborhood associations and business districts to fully participate – the corrals will eventually come into fruition!

I live right off of 28th where the new bike corrals are getting put in. I think its great, and while Its a little confusing why certain places got them and others didnt (im sure a little under the table discussions took place), it is incredibly pleasing to see some cycling amenities on 28th. Although I feel the place that needs the corral the most would be right off of 28th and stark, next to Bonfire/Goodfoot/StarkPizza, as that area is always SUPER crowded, the bike staples are always full, and all those places have outside seating. I fear some of the bike corrals that they are putting up now are going to be underused as the shops they are in front of arent quite as popular as they think.

I find 28th to be one of the most heavily trafficked bicycle streets in portland, yet it has nothing to help keep cyclists safer. While the corrals dont do anything to help safety, perhaps this is a step in the right direction, which is to get 28th a CYCLETRACK! Obviously the demand is there, and all you would have to do is remove a lane of parked cars, and turn it into a two way cycle track. Maybe its just cause I live here, and I ride it multiple times every day, but I really cant think of a better place in the city to put a cycletrack.

Just to respond to some of the comments here and within other comment strings: Some have voice concern that PBOT is missing obvious locations choices for corrals. Just to reassure readers, there are still additional corrals to be installed along this corridor.

Specifically, Fonda Rosa and Beulahland at NE Couch and 28th have requested a corral, as well as Tabla Mediterranean Bistro and Bishops Salon at NE Davis and 28th.

We are also investigating corral opportunities as close as possible to the Laurelhurst Theater, however traffic movements here create a challenging environment.

Finally, there is no question that SE Stark at SE 28th is in dire need of a corral. Unfortunately, the pro-time parking are a barrier when trying to identify a permanent corral location. PBOT and the local businesses at this intersection hope to find a reasonable solution in the near future.

As always, thank you for the feedback!