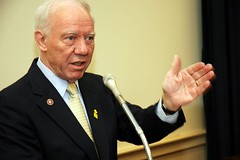 Today — the man who just two years ago stood in front of 2,000 Cycle Oregon riders in lycra shorts (after he himself battled the day’s grueling climb) and told them he would “thread the language of bicycles into the federal transportation bill” — got his chance when he submitted The Surface Transportation Authorization Act of 2009 to the Committee on Transportation and Infrastructure.

U.S. Congressman James Oberstar, who is Chairman of that committee and a towering figure in the American bike movement, has presented the proposal along with House colleagues Peter DeFazio, John Mica, and John Duncan. 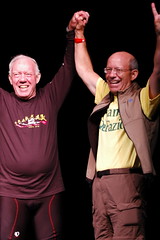 The bill would replace the current federal transportation bill which expires in September. In it, Oberstar proposes $500 billion over the next six years on a variety of programs and facility types — from highways to high speed rail.

According to Josh Vorhees in the New York Times,

“Oberstar and ranking member John Mica (R-Fla.) are calling for a $337 billion investment in highway construction, $100 billion for public transit and $50 billion for President Obama’s vision of a nationwide high-speed rail system. The remaining $13 billion is for a variety of smaller initiatives.”

The bill comes just two days after U.S. DOT Secretary Ray LaHood called for an 18 month extension of the current transportation bill. Oberstar is opposed to any extension and he wants Congress to pass a new bill before the end of the year.

A quick scan through the 90-page document shows sweeping changes to the status quo of how the federal government manages and funds transportation (75 program would be cut or consolidated). Among them is a much stronger focus on investments in transit and metropolitan areas, as well as tying funding to livability and climate goals.

How does bicycling fare? We’ll be digging into that more in the coming days and weeks, but a cursory search of the document found 129 mentions of the word “highway”, 128 mentions of “transit”, and just 7 mentions of “bicycle”.

A major highlight of Oberstar’s bill is the establishment of an Office of Livability within the Federal Highway Administration. According to the bill, the office would,

“bring focus and leadership to move alternative modes of transportation forward, and improve the livability and sustainability of the nation’s communities.”

Here’s another excerpt from the bill’s language about the Office of Livability:

“While car travel will continue as the core of our surface transportation system, our network must give travelers options that go beyond the automobile. Public transit, walking, and bicycling take cars off the road, reduce congestion, lower our dependence on foreign oil, and lessen our greenhouse gas emissions. A system that provides modal choice provides benefits for all users.”

“The Office of Livability will establish a focal point within FHWA to advance environmentally sustainable modes of transportation, including transit walking, and bicycling.”
— from a white paper outline of the bill

In a 17-page white paper released yesterday, Oberstar wrote that the Office of Livability would, “establish a focal point within FHWA to advance environmentally sustainable modes of transportation, including transit walking, and bicycling.”

The description of the Office of Livability points out several specific tasks it will be responsible for. Among them are the “adoption of comprehensive streets policies and principles.” (A.k.a. “complete streets”.)

And, in what must be causing major excitement in the Missoula, Montana offices of Adventure Cycling, the bill states that the Office of Livability would establish a “U.S. Bicycle Route System,” which would, “create a system for approval and designation of routes on a national system of bicycle routes.”

This is a nod to the collaborative effort between Adventure Cycling and the American Association of State Highway and Transportation Officials (AASHTO) that would establish a 50,000 mile network of 50-mile wide swaths that criss-cross the country and link key destinations. In October 2008, AASHTO formally approved the framework for this plan.

Of course, there’s still no money to pay for this $500 billion proposal (which is almost twice the size of the current transportation authorization) and there is a very big question mark over whether or not it will even be given the time of day by Congress any time soon.

Download the full bill outline here (PDF), or check the 17-page, condensed version here (PDF). (Thanks to T4 America for the docs.)

Great post Jonathan. It’s been a busy day. Been enjoying the coverage of it over here on the east coast.

As a bicycle commuter I loved hearing this, but the movement for expanded trains and $50 billion for high speed rail is what really excited me. I would love to go from Portland to Vancouver with my bike in a matter of a couple hours and spend an afternoon pedaling around Stanley Park. That is the kind of forward thinking we need, and the Oberstar-Mica transportation act must be passed swiftly.

7 mentions of bicycling is huge. This bill has to be sold to the general congress. Having a single mention of alternate transporation sounds pretty darn positive and a big step in the right direction.

High speed rail? Great. Build bike paths parallel to the new tracks at the same time and save some tax dollars.

So why are Oberstar and LaHood butting heads on this? There are advocating for similar if not identical things. My guess is that the economy is in much worse shape that Obama is letting on.

I think you hit the nail right on the head, Coyote – the economy *is* in much worse shape than the administration is letting on, and there’s a very good chance inflation will take a big jump next year. Also, the next major round of foreclosures is looming. Most economists say we still haven’t bottomed out, and the repercussions of the GM and Chrysler bankruptcies and their cascading effects on the supplier chain haven’t been fully felt yet.

Also, while rising gas prices don’t affect many of us directly, they affect the cost of almost everything we buy, and for those who drive, each $.01 increase in the cost of gas takes $40 million out of the economy from other purchases, further weakening the overall economy.

Jonathan, thank you for bringing attention to this blueprint for the federal transportation authorization and we especially want to acknowledge Congressmen Oberstar and DeFazio for their support of the U.S Bicycle Route System. We’re excited to report that some states are moving forward to implement the corridor plan. We recently coordinated a meeting with Florida and Georgia to talk about routing and Maine, Michigan and Wisconsin are also working on routing. AASHTO also recently approved the application so when these states are ready to apply, the process is ready. It all great momentum.