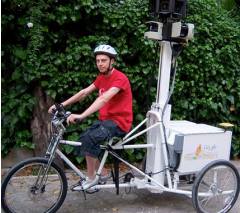 Well, according to an article published today in USA Today, that might be possible sooner than you think.

Google made waves back in May when images of their new photo-trike hit the Internet.

Some people immediately realized that the smaller footprint of the trike (they typically use cars) would allow Google to expand their Streetview offering to off-highway paths. Now, USA Today reports that they’ve deployed the trike to a bike trail in Monterey, California.

“Much of the world is inaccessible to the car,” says Daniel Ratner, a Google senior engineer who designed the trike. “We want to get access to places people find important.”

Speaking about backlash Google has had in some places over privacy issues related to Streetview, a marketing expert told USA Today:

‘You’re freaked out by Street View, well, look at this. What’s not to like about biking and hiking trails?’ It makes the whole project now seem warm and fuzzy.”

I love that bike trails are “places people find important” and that marketing experts say things like “what’s not to like?” about them.

Wondering if/when the trikes might show up in Portland? The Oregonian’s Joseph Rose says he met a Google rep during a recent trip to Washington D.C. who told him they’re on their way.

Stay tuned, we might have Streetviews of the Esplanade and the Springwater sooner than you think.

Can I get paid to haul one around on the weekends? 🙂

I’d be most interested in using it to expose bike-only access routes across the city (e.g. I-84 crossing at Hollywood or I-5 at Failing, cut-through for bikes on Tillamook, etc.)

I am most interested in google adding a ‘bike’ option to their ‘walk’ or ‘take transit’ or ‘drive’ options. obviously it would be good if off-street trails were in the database.

bycycle.org is all well and good, but if the true power of google was on this, it would be much more awesome

looking forward to seeing google “street view” of north portland greenway and other trails around town.

–and ditto what Allan said. I’d love to see a ‘bike’ option in addition to the ‘walk’ and ‘take transit’ options…

mainstreet freakcab! sweet idea…but i can think of quite a few places this thing will be moot….like…well, just about every bike path that has poles at the entrances to deter motor vehicles.

Portland bike freaks should come out and line the trails for the advent of Google streetview camera trike. Pedal, pose, perform, what have you… What a cool semi-permanent performance art installation that would make!

ya think he needs the helmet? not like that thing is going to roll over?

they were here in pittsburgh last fall, i think october. can’t wait for it to happen.

my friend was riding when it went by too, i hope he’s in it. I’m mostly excited for the “bike there” option which i hope will be available after this

It looks like it might be about the same size as a bike trailer one might haul one’s kids around in, or the size of one of those adult trikes. Those things go on the off-street trails, don’t they?

Anyhow, I think it’s pretty cool. And, +1 on getting Google to include a “bike” option on the directions.

Size=width, sorry about the confusion.