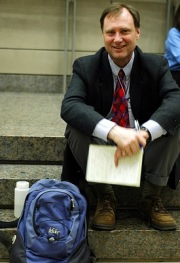 Author and reporter Jeff Mapes is living the first-time authors’ dream. His book, Pedaling Revolution, is winning popular and critical acclaim, he has become a sought-after speaker, and it is selling at an unexpectedly brisk pace.

Last week, the book found its way into the prestigious Sunday Book Review of the New York Times where it was reviewed by none other than bike-lover and musician David Byrne (who’s coming out with his own bike book this fall). Byrne, not surprisingly, sang the book’s praises.

After just three months since it was released, the book’s publisher, Oregon State University Press, is already calling it “a smashing success.” OSU Press Associate Director Tom Booth told me yesterday that the book is their fastest-selling title ever.

Given the down economy, Booth said they did a “conservative” first printing of 2,000 copies. Turns out, that wasn’t nearly enough.

“What we hoped might be a year’s supply lasted three weeks,” said Booth. So, in mid-April they took shipment of a 3,500 copy second printing. And just yesterday, they ordered 3,000 more.

With over three decades experience in journalism, there’s no doubt Mapes can write. And, as an everyday rider himself, his heart was invested in this project. But a key “x” factor in this book’s success would also have to be timing.

“His timing was perfect,” Booth explained, “He took a topic — transportation bicycling — that was exploding on the streets and online and captured it for new audiences.”

Mapes isn’t used to the role of celebrity author, but he’s adapting to it well as he skips across the country speaking conference keynotes, book signings and media interviews. I chatted with him on the telephone yesterday.

I asked Mapes if he was surprised at the book’s success: “I had my fantasies,” he replied, “but it’s maybe fulfilled a few more them than I thought it would.”

Mapes is a humble man, and said all he has done is to “popularize what many people inside the movement have been talking about.” He went on: “I just put it all in one place. It reminded me of what you do with BikePortland.” (thanks Jeff)

Far from a dry, academic read, what Mapes’ does so well in the book is to weave the facts and figures into an approachable tone that moves at an easily readable pace. The result is a book that is not only useful for well-informed insiders and up-and-coming advocates, but one that breaks through to regular, everyday people with just a passing interest and/or curiousity in bikes.

Mapes told me a story of how someone in his yoga class read it and then passed it along to a friend. That person was then, “inspired by it…it just changed her life,” Mapes recalled. 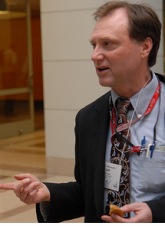 From delivering a keynote to a conference for the Nevada Department of Transportation, to revving up advocates at a bike and pedestrian summit in Dayton, Ohio — Mapes’ documentation of a revolution has now put him at the cusp of it.

Is his book stoking the revolution? Or, is it just another piece of evidence that a revolution is underway? Probably a little of both.

Here’s Mapes’ take on that question:

“I wouldn’t be so presumptuous that the fact that my book is out there proves that there’s a revolution afoot — I’ve just been really struck by what’s happened in the last year-and-a-half or so. In the four years I worked on this book, I saw a real change about a year ago. You could feel this change, it was stunning.

When I started, you should have seen some of the blank looks I got when I mentioned my topic. But somewhere in the last year or so, I started to get a much different reaction.”

Now, the reaction he’s likely to start getting is, “Will you write another bike book?”. At least that’s what I asked him.

“I’ve got ideas [for another book] out there,” Mapes said, “but between my regular job and doing all this promotion, I don’t really have the time for it right now.”

— I reviewed Pedal Revolution back in March. You can learn more about this and many other great bike books, by browsing the BikePortland Bookstore (and remember, purchases made from links on that page help support this site).

Where is this being sold in PDX?

I bought it at the Washington Square B&N as it was on the way home from work (by bike of course). It was tough to find in the “Urban Studies” Section and it looked like they only had one copy. I actually expected it to be more prominently featured in the store. I’m not too far into it but I 2nd Maus’ review.

This is great. I love the book and I love that fact that this subject matter is so interesting to so many people. Makes you feel like a revolution just may be in the works.

Zaphod, I got my copy at Powell’s.

I’ll 2nd Amos for Powell’s, the Powell’s on Hawthorne has copies as of a few days ago and it was even 30% off!

I’m just starting it, but it looks great so far.

Zaphod, I bought my copy at the Hawthorne Powell’s. An employee there had good things to say about it, and that it had been selling lots of copies.

I’m most of the way through the book, and I’m really enjoying it. Very informative, and very readable. It just ticks right along.

I bought this book and just devoured it. Great book! I gave it to a friend in Ohio to help inspire him.

Having recently graduated from UCD, I can really identify with the chapter on Davis.

Hey! Buy the book through this site! Just as a reminder, you can buy the book here and pick it up at a local Powells, thereby having the best of both worlds: supporting bikeportland and instant gratification.

Click on the “BOOKS” tab above. I have no interest in mentioning this other than I want to see a website I read frequently supported.

I originally borrowed it from the library but ended up buying my own copy (via Powells) as I rushed through a couple parts to get it turned back in and my husband didn’t have a chance to read much of it at the time.

great book. love it. I read it in record time for me.

I’ve been rereading/finishing it over the last few days, and enjoying it a lot. And a friend of my aunt’s lives here in Portland and asked me for biking tips – he said he was inspired to buy commuter bikes for himself and his bike after reading the book. Wow!

I got it from Broadway Books after Jeff did his reading there. Pretty sweet bookstore, owned by two women for 17 years! http://www.broadwaybooks.net/