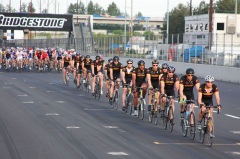 Warm weather has buoyed the collective mood of riders throughout the Portland area in recent weeks. But for some, thoughts unfortunately have turned to friends and riding partners involved in a spate of recent crashes.

I’m not sure if there have been more crashes this year than in previous years, or if I’m just hearing about more of them. Either way, I feel the need to share a few of the more serious ones if for nothing else than to rally our good thoughts for their quick and full recoveries. 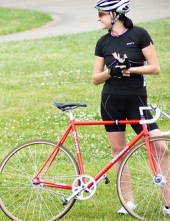 On Monday, Ironclad Racing Team rider Kristin McCarthy went down in the final sprint of a circuit race out at Portland International Raceway. The crash left Kristin with a brain injury and she has just been moved out of the ICU at Legacy Emanuel Hospital in North Portland. Last night, another racing event was held at PIR and Team Ironclad rode two laps at the front in her honor (see photo, above).

Donations for Kristin are being taken via PayPal to rider15@gmail.com. Follow her recovery at IroncladCycling.com. 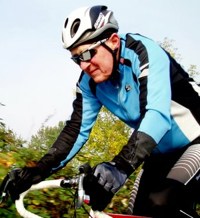 The community is also coming together with thoughts and prayers for Bruce Giunta of Tualatin. Bruce was on a Portland Velo group ride in Vancouver yesterday when a stick flew into his wheel. The crash left him with critical injuries. More on that crash (and a few others) reported in today’s Columbian newspaper.

On May 10, Team Rose City rider Ralph Medica crashed under mysterious circumstances while riding on NW Rock Creek Road, just north of Old Cornelius Pass. Medica, 54, was found on the side of the road by a passerby. His bike was “amazingly unharmed” according to a teammate.

Medica told me today that he has no recollection of what happened. He suspects a truck mirror hit him, but no one is sure what caused his crash. Police did not respond to the scene and no investigation is planned. Medica was badly bruised, suffered a face fracture, and spent several days in the ICU at Oregon Health Sciences University where doctors operated on a crushed vertebrae. He is now recovering in a back brace at his home.

Crashes are a part of racing and of riding, but no one likes to hear about serious injuries like this. I hope the riding season ahead is relatively serious-crash-free from here on out.

I’ve been hit by truck mirrors 6 times in one summer when I still lived in Michigan. I’ve been extremely lucky that my greatest injury was some road rash and a sore shoulder.

Best wishes to all in recovery and hope they spin again ASAP.

wow when i first moved out here i rode with Bruce Giunta. hope everyone pulls threw.

best wishes for a full and speedy recovery.

Hope to all. It’s always sad to hear about people getting hurt doing what they love.

sucks, but a lot of crashes happen at PIR, year after year.
some of it is due to inexperience and unwillingness to learn proper racing/sprinting techniques….some of it is gear failure…some of it is lapse in attention…some of it is just bad luck.
spoke with some of Kristin’s friends today…she’s actually doing OK and is slated for discharge in a few days…thoughts go out to her, her family, and Clint.

I’m seeing quite a few bike accidents both in the ER and also on the road. PLEASE remember..bikes don’t ride on sidewalks..and if you do – you need to stop and be very careful crossing the street…i just had yet another biker zooming, sans helmet, off of a sidewalk and T-boning a car taking the turn at the corner. The biker didn’t even slow down..then stood and cursed the driver relentlessly. Sorry but that driver isn’t responsible for your crazy driving skills off the sidewalk…and where is that helmet? If you don’t wear one..at least carry your donor card!

Best wishes to those injured for a full and speedy recovery!

I’m seeing quite a few bike accidents both in the ER and also on the road. PLEASE remember..bikes don’t ride on sidewalks..and if you do – you need to stop and be very careful crossing the street…i just had yet another biker zooming, sans helmet, off of a sidewalk and T-boning a car taking the turn at the corner. The biker didn’t even slow down..then stood and cursed the driver relentlessly. Sorry but that driver isn’t responsible for your crazy driving skills off the sidewalk…and where is that helmet? If you don’t wear one..at least carry your donor card!

Joe..just because you may not comprehend the dangers of riding recklessly, doesn’t mean other’s don’t.

I had some jackass on a bike two nights ago fly through a stop sign at well over 20mph and come within a few feet of hitting me..he then proceeded to tell me to “fuck off” after I pointed out the face he missed a stop sign..he’s apparently a total genius.

there will be more accidents this summer…plenty more…many caused by morons on bikes.

I.e, #6: I agree. Sidewalk riding at more than pedestrian pace, especially when leaving the sidewalk, is totally dangerous and powerful in it’s ability to cultivate animosity. Unpredictability begets fear begets anger and sometimes also begets tragedy. And the “cyclist can do no wrong” attitude is very counter-productive. The donor card quip was a little dark….but your point is well-received.

lol! gimmie a break.. we are off the real subject that was my main point!

just a little update kristen is still in the hospital, having surgery this afternoon! our thoughts will be with her and clint today!

We’re all thinking of you day and night, Kristin, and look forward to your full recovery — which will happen before you know it! If anyone has the spirit and determination to kick recovery right in the butt, it’s you, ma’am.

See you soon! Sending much love your way….