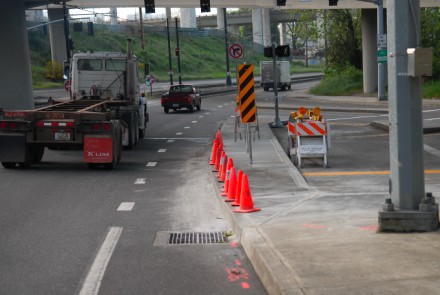 Looking south on Interstate with Greeley to the right. City crews have extended the median and joined it with the sidewalk to make the right-turn closure permanent. In October of 2007, a man was killed at this intersection after a collision with a right-turning truck.
(Photos © J. Maus)

The City of Portland Bureau of Transportation (PBOT) has completed a project that permanently closes the right-hand turn from N. Interstate to N. Greeley Ave. The turn was at the bottom of a steep hill and after a sharp turn that inhibits sight lines of bicycle riders and right-turning motor vehicles. 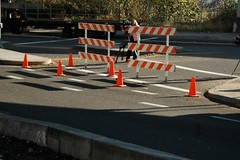 Here’s how it used to look.

In November of 2007, Mayor Sam Adams (then Commissioner of Transportation) called the intersection “inherently dangerous” and ordered PBOT to put up barricades to temporarily close it. Adams’ concern came in the wake of two fatal bike crashes (including one at this intersection) that involved right-turning trucks.

The project is the final infrastructure project that was part of a series of bike safety improvement measures funded by an emergency allocation of $200,000 approved by City Council in December 2007.

City traffic engineer Rob Burchfield said that they looked at other options — including a bike box and a special, flashing “no turns” signal that would be actuated by bicycles — but that, “We felt closing the right turn would eliminate the conflict and uncertainty.” Crews have poured concrete and connected a median island with the sidewalk. The work cost an estimated $10-15,000.

Local artists are working with the Oregon Department of Transportation (ODOT) to create a memorial mural for Brett Jarolimek on the underpass at this location. Funding for that project is still in the works.

Works for me. Thanks!

Whoa, wait a minute! Is that a parallel sewer grate in the top pic? Back to da drawing board, guys!

Oh Paul Tay, that’s adorable. 🙂 You must not ride on Interstate very often, because those grates are about every 100 feet.

The grates have crossbars and are safe; just a little annoying to have to ride on the outside left to get a smooth ride. Could be much worse…

when are they going to re-install the stencil?

boriskat (#3) Paul lives in Tulsa, he only rides here once a year. If he shows up on one of my rides for Pedalpalooza, I’ll try to make sure we bomb down Interstate.

Ok, not to open the Sam can of worms all the way, but he did say they’d close it permanently (as did Roger Geller and Rob Burchfield), and they did it.

ODOT did a nice brick pavement there a few months ago, but its too bad City TB (not the disease, but the Transportation Bureau) did not coordinate better with ODOT to allow the paved area to be larger, etc.
I think Portland has plaza-phobia because no one wants to maintain public space that is not for cars.
This right turn only served people who were lost…now they can just proceed to Russell, do the “jug-handle” and head back north on Interstate to Greeley.

Yay! Thanks, Sam, Roger, Rob, and the rest of PBOT! Now for some artwork!

I witnessed a rider so excited about this improvement this morning that he didn’t even stop at the red light in front of us.

I ride through here at least once a day, and am very happy to see that I no longer have to worry about the right hook (at least not until the next light cars are required to execute a 270-degree right turn – scary spot!). I just hope that we all can respect the lights here and around the city to keep us all safe.

I know many people feel that the city doesn’t do enough for bike safety, but having moved here recently from New Hampshire, I have to say it flat-out amazes me how responsive local government is to these concerns. Back in the “Live Free or Die” state we’d have to suffer a dozen crashes or deaths at an intersection before anyone would even begin to consider allocating money to improve the infrastructure for bicyclists.

Good point about Sam. Fact is, he’s done a lot of good for cyclists over the years, which makes it all the harder to take his CRC position, his needless posturing, and gladhanding of fat cats. Maybe he has an evil twin.

A-MEN. I am SO glad they finally closed this turn for good. It served no purpose other than to put us at risk unnecessarily. Thank you to everyone who was responsible for making and implementing this decision.

But, if the intersection’s clear, and PoPo ain’t around, don’t expect me to be in the bike lane or to stop at the red. I’m rolling it!

Oh, ratz. Now, I’ve done it. Every popo will be at that intersection. Disclaimer: For comedic purposes only, with every intentions to obey the LAW.

The mural to the bike rider that died doesn’t do anything for the guy who was driving the truck – its wrong to say he wasn’t sharing the road. That he had 100% fault in this – but bikers seem always to be in the right. How about adding to the mural a nod to drivers who’s lives are ruined by careless bikers (and there are some careless ones…)

I doubt this will be published, this side of the conversation goes un-addressed.

From the looks of the scene, the truck was making a right turn in front of the fast-approaching cyclist, bombing down the long grade, aka the dreaded right hook.