Why should the City of Portland invest in bicycling? 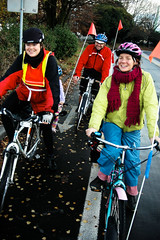 Staffers and volunteers working on the City of Portland’s Bicycle Master Plan update are currently putting on a full-court press to finish what they hope will be the most ambitious and innovative plan of its kind in the country (much like our current one was when it came out in 1997).

Part of that massive effort (which I’ll be sharing more about in future stories) is the creation of new materials that help flesh out the case for biking in Portland. Skimming through the City of Portland’s website the other day, I came across one such document (I assume it will be used in the upcoming Bicycle Master Plan open houses in May).

The one-pager is titled “Why should the City of Portland invest in bicycling?” (download PDF below). It lays out many intelligent, compelling, and important justifications to promote (and pay for) better biking conditions.

I’ve reprinted it below:

Why should the City of Portland invest in bicycling?
The role of the modest bicycle in tackling the great challenges we face, today and tomorrow, and why bicycling is a vital tool in realizing the Portland we envision

In Portland, bicycling is more than just a recreational pastime. It is the City’s fastest growing means of
transportation. In the last four years annual growth in bicycling has been exponential! In 2008, more than one of every six Portlanders used a bicycle as either their primary or secondary means of transportation to work. Here’s how bicycling can help Portland achieve some key goals identified in the Portland Plan:

CLIMATE CHANGE & THE ENVIRONMENT – a city that is resilient in the face of climate change and has a minimal carbon footprint
Forty percent of Oregon’s CO2 emissions are attributed to transportation, which is also the fastest rising source. Bicycling can efficiently serve the fifty to sixty percent of trips in Portland that are 3 miles long or less. The draft City/County Climate Action Plan calls for a 30% commute mode split for bikes by 2030.

AFFORDABILITY & ACCESSIBILITY – an affordable city with changing demographics and access for all to services and resources
Bicycling is the most equitable and affordable form of transportation. Every year the City expands and enhances what is already an extensive 274-mile network of bikeways. Portland bikeways connect important neighborhood, civic and employment destinations while providing seamless links to regional transit.

HEALTH & SAFETY – a city that enhances human health and safety, promotes active lifestyles and safe routes to schools and neighborhood destinations
The Center for Disease Control says that “automobile trips that can be safely replaced by walking or bicycling offer the first target for increased physical activity in communities.” In Portland, the bicycle crash rate has declined as the number of bicyclists has grown. Studies suggest that getting more people cycling instead of driving helps make everyone safer!

PROSPERITY – a prosperous city, building on our competitive strengths and our core values of equity and sustainability
Portland’s “green dividend.” identified by local economist Joe Cortright, annually keeps $800 million
circulating through the region’s economy that would leave the region if Portlanders drove as much as the U.S. average. In 2006, bicycle-related economic activity contributed an estimated $100 million to the city’s economy, along with 600 to 800 jobs. Portland’s “platinum-level” bicycle-friendly reputation attracts tourists as well as bike-oriented businesses.

DISTINCT PLACES – a city that preserves the quality of our neighborhoods and creates other unique and livable places as we accommodate growth
Bicycles are distinctly Portland! Since bike trips are local in nature they enable interaction between
neighbors, strengthen the rider’s connection to the community, increase the likelihood of shopping locally, place more “eyes on the street”, and contribute to the sense of place.

NEW WAYS & MEANS – a city that develops new ways of achieving public services and investments in a world of changing fiscal conditions
Investing in bicycle infrastructure is a cost-effective means to provide access and mobility. Despite spending less than 1% of Portland’s capital transportation budget over the past decade on bicycle expenditures, the city has seen dramatically increased ridership. Bicycling truly is Portland’s best transportation buy.

Any bike advocate in Portland worth a grain of salt should commit these tidbits to memory.

Now, anyone want to put all that on a t-shirt or poster?

— Download the PDF: Why should the City of Portland invest in bicycling? (112 kb)

It’s easy to bike here already. I hope this city doesn’t succeed in its agenda to build a rubber room for cyclists. Given its current spending, it will likely run out of money first.

Jonathan, is it possible that the comment function is broken? For a couple of days now, I haven’t been able to see a post’s comments, even though according to the top of the post there should be comments. I’ve asked a friend of mine to confirm and she also can’t see the comments.

I’ve drunk the Kool-Aid on Portland bicycling, but I am more than a bit skeptical about the “one of every six Portlanders used a bicycle as either their primary or secondary means of transportation to work” citation. What is a secondary means of transportation? And, what does that mean? Is that a poll of some sort where “one of every six” folks can list a single trip to the office in a year to qualify themselves as a bicycling commuter? I’m not arguing for some sort of ideological or even statistical purity, but the number seems to suggest that a very large number, 17%, of Portlanders commute by bicycle. It doesn’t’ ring true even though I am impressed with the large numbers that do.
As a city resident and a cyclist (for fun and transportation), I am in favor of expanding our commitment to a town that very much favors bicycling. Having recently spent some time in Copenhagen where bicycling is just a normal way to get to the office or store or park, I welcome the day when Portland can make a similar claim.

Harald, i have gotten many emails that comments are not showing up for some readers. I’m not sure why. I’m working to resolve it now. thanks.
———–

@ mark, I use my bike as a “secondary” means of transportation. I combine bike and transit to get to work most days, but some days I just use transit.

Portland is a GREAT city for bicycling, and I am behind any and all efforts to make it better – especially given the cost-benefit analysis. Thanks for this list, Jonathan! I’m thinking of ways to make it visible in the community… hmm..

17%, of Portlanders commute by bicycle. It doesn’t’ ring true

This number is likely accurate, as the overwhelming number of cars that you see on Portland’s freeways are coming from outside the city.

The data is based on the City Auditor’s 2008 annual Resident Survey. You can find the commuting information on the 6th and 7th pages of the report. The Auditor reports that 8% of Portlanders identified the bicycle as their primary means to travel to work and another 10% identified it as their alternate mode of travel.

You can find the Auditor’s methodology here.

According to the Auditor’s report, 47 percent of respondents report they had no secondary mode. Ten percent considered bicycling to be their secondary mode. But a full 58 percent used that secondary mode only one or two days per month.

Using a bike 3 or 4 days per week still qualifies that as one’s primary mode, but we shouldn’t count that as 100 percent bike mode use. Even those of us who are dedicated, year-round bicycle commuters choose to drive every once in a while.

If you work through the Auditor’s report using careful statistical analysis, you’ll find the results are not too different from the Census Bureau’s statistics on the journey to work. Portland still leads the pack for bicycle commuting, but the commute to work is actually in the 6 to 8 percent range.

That’s not to say that we shouldn’t promote and encourage cycling by those who consider the bicycle to be their secondary mode. We clearly should, but let’s be careful about how we present our information.

Skeptical, you forget that there are thousands of people in Portland whose sole method of transportation is cycling because they have no need or desire for a car.

Thanks to those clarifying or amplifying the statistics. Be aware that I am fully in favor of efforts designed to improve, expand and celebrate bicycling in Portland. It’s just that I cringe when I read “one of every six” as a statistical justification to promote a particular policy. Skeptical’s numbers sound more realistic and that is still a strong indication why we should continue policies that favor bicycles in Portland.

Comments had not been appearing on my Mac/Safari over the weekend.

What the blurb says in that “In 2008, more than one of every six Portlanders used a bicycle as either their primary or secondary means of transportation to work.” Even if you only rode to work once a month, you still make up the one in six.

Vote Up0Vote Down  Reply
« An “unprecedented win for bicycling”: Bikestation gets $500,000 angel investment
Holy moly, I’ve been doing this for four years! »