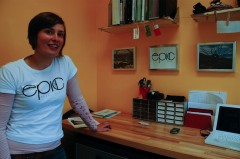 Jude Kirstein was bike touring with friends in the Patagonian Andes and realized after climbing all those mountains that, “there’s nothing you can’t do — so you might as well go for the gold.”

After that trip, Kirstein returned to Oregon and earned a wheelbuilding certificate from the United Bicycle Institute in Ashland. Two weeks ago she fulfilled a long-held dream by opening up shop as a custom wheelbuilder here in Portland under the name Epic Wheel Works. 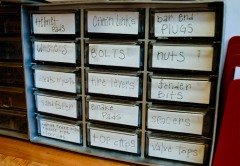 Kirstein says she sees the majority of her job as “education.” She loves being able to sit down and talk with her customers about their wheels, and to get them really involved in the build and aesthetics. She wants the experience of choosing a custom wheel to be “open, free, and relaxed — not intimidating.”

Customers are already asking her for features she didn’t expect — such as a message written on the inside of a rim. She’s figured out a kind of clear coat that she thinks will work, and is excited to tackle the project.

Kirstein spent three months in college working at Maya Pedal in Guatemala. One of her goals is to grow her business enough so that she can help create opportunities for more mechanics to work at community bike projects around the world.

Kirstein will be holding an open house tomorrow, Wednesday April 1st, from 4 to 7pm. Her shop is at 833 SE Main, space #334 (right upstairs from BikePortland headquarters). She promises “wheel shaped treats” and lots of in-depth talk about travel, bikes, and the intricacies of her trade.

Update (4/23/09): After posting this story, I commissioned Jude to build me a new rear wheel. It’s on my bike as of yesterday. I took some photos at a couple points in the wheel building process — you can see them all here.

fantastic to see custom bike and wheel builders have such a great market here in pdx. rock on jude.

Jude is awesome…she was also a bike tech at REI in Eugene for awhile. Damn you Portland for stealing her from us! 😀

good luck, Jude. its a tough business.
tip: if you can make some local racers/teams happy with the abuse they shell out on wheelsets, word of mouth will happen…make them under 1300 grams and you’re really cooking. make them affordable and you’re set.
as the saying goes: light, cheap, durable…pick two.

If this were a dude, would anyone care?

I wish Jude the best of luck and all the success, but the most valuable wheelbuilding skill is experience, many years of it. It will take her some time to build a reputation, like the other wheelbuilders in town.

There’s always one post that introduces negativity into a totally cool thing.

middle of the raod sounds a little to the right….

hey thanks guys! i appreciate all the comments even the “negative” ones. i couldn’t agree more with what was said about experience. coming into this business, i enter with complete humility. i have built wheels, i have tested my wheels on grueling bike trips but there’s always more to learn. thankfully, i have great teachers. rich lesnik, wheel builder for rivendell bikes, and i spent a few days in his studio and at rivendell building. i cherish the time he spent working with me, among many others. a great part of going into this business is simply to carry on the story of the hand built bicycle wheel. all i can say is that i’m eager to learn more and share what i already know.

yes! can i get “all you haters suck my balls” calligraphied on a rim wall?

i offer four delicious fonts for your riding pleasure!

Hey Jude! I’ll bet you’re going to make lots of people who need wheels roll for many happy miles. That’s the way to ‘take a sad song and make it better…’

I think everybody sucks. Also I hate Christmas. But I love twisted spokes. Will Jude build those?

I don’t think what I said was hating. The fact of the matter is that we have some very respected wheelbuilders in town, and they are big shoes to fill. Jude went to UBI and has consulted with some wheel gurus, so she has it covered.

Once again, best of luck, Jude

No one’s calling you a hater Skid, you goofy bastard! 🙂

It’s always nice to see a young tradesperson take some initiative and see if they can make it on their own. I don’t see how her gender has any part of this discussion. Bikeportland has profiled many builders/designers/tradespeople in the past, and I haven’t noticed any gender bias in its coverage. Best wishes to Jude in her new endeavor!

I’ll echo @vincentpaul and the many others who are pleased to see this small business profile. Ignore the naysayers on here, Jude; they’re just grouchy because they’re anonymously critiquing more active, innovative people online as opposed to getting out on their bikes. And as for the gender issue, there is an overall statistical lack of news coverage about women business owners/leaders in most industries – including “progressive” “sustainable” industries – so I applaud reporting that profiles *all* kinds of business owners, as opposed to coverage that dumps people into stale outdated categories. This story is interesting regardless of gender. We can learn from those who work proactively around the globe, people who bring that perspective to our community. Welcome, Jude! I look forward to visiting your establishment, even though I’m not much of a racer and may not be worthy of your stellar wheels!

I don’t recall saying she can’t build a decent wheel….all I said was that if this were a guy doing it it would be less newsworthy.

The way I see it, I don’t think her having two X chromosomes makes it a special circumstance.

If you are celebrating the fact that she’s a woman who builds wheels, great. The suggestion there is that women are not as capable or less inclined to do so. That, to me is a form of bias.

Who cares about the gender of the builder?

“…all I said was that if this were a guy doing it it would be less newsworthy.”

apparently the term “newsworthy” is getting vague around here.

Middle of the road guy, I didn’t report on gender in this story and frankly it didn’t even strike me as unusual or worth remarking on in any way, though maybe I should have. You make it sound like I called her a “lady framebuilder” or something harking back to the bad old days of journalism.

The reason we profiled her is because a new, small, local bike-related business is news that we think our readers probably want to hear. It relates to the economy, the culture, and to the practical logistics of getting a custom wheel (with or without love notes in the rims).

Just wanted to say Thanks again to everyone for your support. My goal is to help many roll down the road with smiles at whatever pace that is–even with twisted spokes. A special thanks to all who attended the open studio event. I was overwhelmed by what an amazing bike community I stumbled into. Can’t lie, not only does it make me want to be a better wheel builder but it just gives me goosebumps!

Gender has absolutely nothing to do with anything. Jude’s spirit would capture anyone, regardless. She will build you a great pair o wheels, and will inadvertently make you re-fall in love with life to boot.