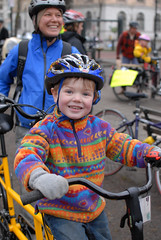 How can the city say no to
a face like this?
-Slideshow below-
(Photos © J. Maus)

Last Friday, about 100 people — most of them families with kids in tow — rode to City Hall as part of a special edition of the BTA’s monthly Kidical Mass ride. The goal was to raise awareness about the city’s budget that currently threatens to lop off about 40% of funding for Safe Routes to Schools programs and is non-committal in terms of funding for promised new bike boulevards.

Riders met up at three locations throughout the city before coming together for a rally and hot cocoa on the steps of City Hall.

At the rally, people held signs that said, “Safe Routes to School is Kids on Bikes”, “Funding Safe Routes = Healthy Families”, and “Portland Needs Safe Routes!”. The BTA’s Michelle Poyourow took to the mic and urged the crowd to keep tabs on upcoming opportunities to weigh in on the the budget (the Mayor releases his version on April 28th) and to contact City Commissioners and urge them to fund bike projects and programs. 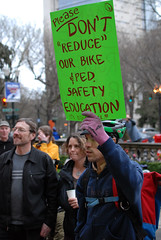 In a statement released after the event, the BTA characterized Bureau of Transportation Director Sue Keil’s “top priority” as “paving arterial streets,” and wrote that Keil feels like biking and walking investments “will have to wait until the crumbling asphalt is addressed”.

The BTA is concerned that if biking and walking investments have to wait until an estimated $1 billion maintenance backlog is addressed, it would be 2039 until residents see “sustainable transportation become a top priority in Portland.”

“We don’t have to choose between paving streets and building safe bicycle routes,” said Poyourow, “We can do both.”

Watch the slideshow below for some very interesting family bike set-ups and more photos from the event:

so, to play devil’s advocate, why is this funding a big deal? that is to say, if so many people are “committed to safe routes”, and “doing it for the children”, couldn’t they just keep the program running on a non-paid, volunteer system?
you know, like almost every single piece of non-BTA bike advocacy which has happened in this town the last ten years? the city doesn’t seem to be saying “you can’t do this”, they seem to be saying “we can’t PAY you to do this.”
is the BTA fighting for their jobs or for “the children”?

not looking to start a flame war, just looking for a justification to keep 100% (instead of 60%) of the BTA’s programs, while ALL other city departments/projects suffer massive cuts.

The BTA is a pretty small part of the city’s Safer Routes program, and it’s a small part of what the BTA does. So yes, the BTA is fighting for “the children.”

But actually, this isn’t just about “the children.” The Safe Routes program probably has something to do with the zero bike fatalities in 2008. Did the streets feel quiet to you this morning? That’s because it’s spring break – so there’s a nice tangible display of just how many cars are on the roads delivering kids to school (various N American cities have found between 1/5 and 1/4 of morning traffic is parents delivering kids to school). An education and outreach program that reaches those parents and affects their driving habits seems like a solid gold investment to me.

As for building bike boulevards on a volunteer basis, I’m not sure that’s legal.

“As for building bike boulevards on a volunteer basis, I’m not sure that’s legal.”

I’d be happy if the center line was painted so big trucks don’t take up the whole road on neighborhood streets.

Maybe an example from a century ago isn’t directly applicable to today, but Portland did try building bike paths and routes on a volunteer basis between 1896 and 1898. It didn’t work. The capital, labor, and administrative requirements were too great. See my Bicycle Brown Bag for more.

It is funny, when you look at the list of employees on the BTA website, the majority of them have ‘Safe Routes’ in their job descriptions.

How is that a small part Michelle? Why don’t you and Scott simply resign? That would free up some much needed funds. think of the children.

How were all those people able to get to the rally by bike? Surely there was no safe route available.

I would appreciate fewer close calls around 3:20 in the afternoon from parents rushing to get their errands done ‘before the traffic comes’

Not Impressed with BTA

Didn’t we just read in another thread that BTA’s Safe Routes to School contract with the city is really lucrative? Who’s telling the truth? Maybe BTA should post up its budget.

And regardless of the impact of that Safe Routes contract on BTA’s budget, you have to laugh when a BTA staffer tries to link its Safe Routes program with zero fatalities citywide in 2008. Now that’s an AMAZING stretch.

Parents and kids at 25 schools in Portland get Safer Routes education and outreach services.

If the Safer Routes program gets cut, that would reduce the BTA’s 2009 budget by 3%.

Like I said, that contract (we do Safe Routes and Bike Safety in other ways too) is a small part of what we do. But we think it’s a big part of what makes Portland safer for bicycling with every passing year.