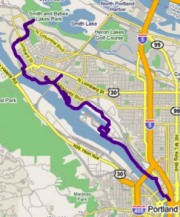 Once built, the trail would
connect St. Johns to the
Steel Bridge.

The Willamette Greenway Trail project, that would connect the Eastbank Esplanade at the Steel Bridge with Cathedral Park in St. Johns, was approved for $444,800 in funding by Metro this morning.

The funds, awarded as part of $68 million available in “Regional Flexible Funds” through the Metropolitan Transportation Improvement Program (MTIP), will go toward a planning study. According to a Metro summary of the project:

“…The study will focus on sites that have challenging topographic and land ownership issues. The project also involves an update of previous budgets and potential phasing of design and construction.”

Scott Mizee, a local architect and dedicated member of npGreenway (a non-profit group formed to advocate for this project), sent out an email to supporters this morning thanking them for sending in comments. According to the Metro committee that made this decision, the North Willamette Greenway Trail Master Plan was, “the project receiving the most public support from the public comment period.” 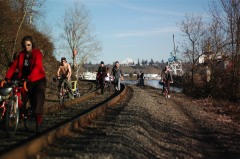 Someday there will be a paved trail here.
(Looking south at Swan Island from a bluff
below University of Portland)
(Photo © J. Maus)

Mizee, and other “core members” of npGreenway have been volunteering their time to this project since their first meeting in November of 2005. Their hard work has led to this project inching much closer to reality and has made it easier for Metro to put their weight behind it.

The trail is currently on a select list of 20 regional trails that Metro’s Blue Ribbon Committee on Trails put together to receive ongoing lobbying support within their Connecting Green campaign.

Yes! Anyone in the community who can help get/ locate funding/help Scott become the paid director of NPGReenway – it would go a long way to keeping this project thriving and full of momentum. I know Scott and his band of volunteers are working overtime, it feels like the right moment in this organization’s evolution to fund a director. Scott would be the natural choice. Plus, he’s available. ( I don’t mean that your cheap, easy or sleazy. ;-)) My 2 cents. I’m doing what I can to talk up the idea, but anyone with ideas should get in touch with the organization – NPG.

wow metal cowboy, I didn’t even think about that. Scott Mizee as ED of NPGreenway!? that would be amazing and it would really help make this trail a reality.

perhaps he can be the unpaid ED first and then use that title and position to help find the money he’d need to pay himself? just an idea.

I don’t know if this would work, but wouldn’t this be a good “ready to go” project to use some Stimulus money for?

stimulus money is only going to projects that are 100% ready to be built. This project is far from being ready to go. The funds awarded by Metro today will get them a lot closer, but much needs to be done to this project before work crews can start laying asphalt.

Minneapolis has done a wonderful thing by creating a Greenwaay trail – mostly on path of an old railway. It is just awesome to ride on it. It’s quite, no trafic and connects the city from East to West. Portland should deffinitely do something of this nature with its own Greenway.

npGreenway has been fighting to get a piece of stimulus money to build the Waud Bluff Trail…a key link down to the north end of Swan Island. So far we have come up short because it involves a RR bridge, and these things seem to take too long. Parks has more than half the money in hand, and is ready to go.
I second the nomination of Scott for ED of npGreenway.

Unless the railroads change their position, connecting this to the existing greenway south of the Steel Bridge is a long shot.

Huge thank yous to Scott and everyone else involved in NPGreenway for the tireless work they have put into it, and congratulations on this success which will be a great asset to the north Portland peninsula. You guys rock!!

The study being funded examines the feasability of building that trail, but doesn’t have a cent for construction. Its a great first step. Also know that the study will extend from the Esplanade to no, not Cathedral Park,but through Cathedral Park, under the StJohns Bridge, to Pier Park, and ( with funding in process for a bridge to cross over the railroad gap,) into Chimney Park on N Columbia Blvd.

So, congratulations not only to npGreenway, but to all of North Portland. As Ricardo Monteban once said in an ad… “the possibilities are INTRIGUING!”

What great news! The volunteers at npGreenway are awesome; keep up the great work guys. Breen G.

I am so amazingly pleased to hear about this. Well done npGreenway.

This is such great news.

Fantastic!!!!!!!!!!! Many thanks to those visionaries who have been riding against the headwinds on this one for so long.

Hart @ 14: I doubt the track’ll be going anywhere.

& BOOO! in general… If/when it gets paved, everybody & their mothers’ll be down there. It’s nice to have a place “in town” that’s not cluttered with people to go. Just like the bit from OMSI to Oaks Bottom; it was better before it got paved – more of a challange, & only the occasional jogger or other cyclist or maybe someone out walking their dog. Now you can’t go more than 2 minutes without having to dodge a dog / stray child cycling along / otherwise inattentive cyclist. & it’ll be worse yet when UP gets their athletic fields (or whatever their plan is) built down there.

Thanks for covering it!