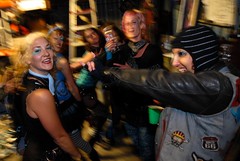 Hollis Hawthorne, one of the founders of The Bay Area Derailleurs bike dance troupe, is clinging to life in India today.

The Derailleurs were formed in 2007 by former Portlander and Sprockette Eliza Strack and they performed last summer in Portland at the Sprockettes Bicycle Bash.

Last week, Hawthorne was riding on the back of a motorcycle in the streets of Pondicherry, India and collided with a bus. Hawthorne was wearing a helmet, but still sustained a major injury to her head. Her boyfriend performed CPR on her for over a half-hour before she eventually ended up in a hospital.

Today, family and friends from all over the world are trying to raise money to fly Hollis to a hospital in the California Bay Area. 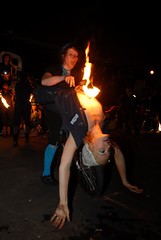 As the news of Hawthorne’s tragic situation spread to Portland, her good friend (and Sprockette) Shannon Palermo sent this email to friends:

“I hate sad news, but I am seeking prayers and thoughts of golden light for our bike dance sister, Agent Verve – Ms. Hollis Hawthorne, of the Bay Area Derailleurs.

…Hollis was integral to starting the Bay Area Derailleurs & truly a sister of our collective bike dance community. It is with great sadness that I report news of such gravity. Hollis is a woman of strength & true zest for life – please join myself, The Sprockettes, The Derailleurs, and the greater bicycle community as we send love and light to Hollis.”

I hope Hollis can pull through this. I watched her and The Derailleurs dance in California this summer (photos here) and she is a light that still has a lot of shine left in her. Updates on Hawthorne’s condition and information about how to donate can be found at the Friends of Hollis blog.

Yikes! I have a dear friend who was badly injured riding on a motorcycle in India. That country’s traffic safety record is pretty dismal. Best wishes for recovery to Hollis.

Cheese & Rice, I first heard about the Sprockettes from Kent Peterson’s blog… sorry to hear that Hollis is hurt! I’ll head over now and make a donation.

Thank you for this story Jonathan & Elly! Thank you greater bicycling community for your love & donations. It’s truly incredible. Hollis is in Chennai in a coma, and we are sending golden light to her & Harrison & Diane & Jill.
Shine with me! Bling it on for Hollis!
Bike dance sista with a spirit of gold!
FIGHT! FIGHT! FIGHT!

Please, please, please if anyone out there can do any of the following, it would mean the world to all us Sprockettes & Derailleurs & friends/family of Hollis:

~ send love to Hollis (psychic healing rays of gold)
~ donate money via the link at the end of the article. anything helps! We gotta get our girl home!
~ provide leads on air ambulances. RNs, doctors, & respiratory therapists willing to accompany Hollis in flight. NGOs with medi-vac insurance willing to help a sister out. Names & contacts of good doctors in Southern India.

Hollis, like many of us, is uninsured, but we have a family friend, Dr. Susan Bailey, lined up, who is willing to help Hollis at Stanford’s (!) Medical Center in Palo Alto. Ain’t no city like generosity, and we got a care bear stare that just won’t quit!

In it for the long haul and ever grateful for all the support!
~shan

quote from Eliza, agent chaos:
WE’RE LOOKING TO CONQUER…our community is there for us shall a sheep run astray from the fold.
Our family is strong and patchwork, but geared on positive living, and therefore surrounds itself in that light. And it is easy to give it off. And it feels good to receive.

I have been getting wreck reports from India for my blog and it seems that their urban and intercity buses kill about 3-10 people a day over there in India. Usually hit-and-run but sometimes the bus is disabled in the wreck and when that happens the buses are usually torched by bystanders who witnessed the wrecks. They have a very quick acting system of dispensing justice for traffic wrecks, the driver is always at fault for hitting a vulnerable road user and is usually stoned or beaten to death by the crowd…

Man, that’s terrible. I’ll be sending her some rays of love! I’ve never seen the Sprockettes, but have lots of respect for people putting their passions out there for everyone to enjoy. I’ll see what sort of green I can send over, too.

I just want to tell you guys who have been donating that we are getting 8 donations every ten minutes. That is so astounding! Last I checked we have raised $17,000 and our goal is $200,000.
With the rate and amplitude this is going, Hollis’ mother won’t have to take a mortgage out on her house after she just paid it off. Keep up the good work!

If you are on the medical/air ambulance tip, you should check out her family’s blog with more adequate medical information and direct linkage with her family.
helpholligethome.blogspot.com

thanks for the write-up jonathan. FYI–people are putting together a benefit show and party this coming tuesday that should really rock the house. so far japanther, the sprockettes, and riot cop are performing, along with a lot of other stuff…it’s still in a formative stage, but we’ll be sure to keep you updated!

Vote Up0Vote Down  Reply
« Heading down to the L.A. Bike Summit
BTA gears up for big Alice Awards bash »