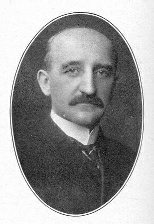 As Forecast Official Pague dealt with a lot of reporting instruments, and like most scientists at the time he had to be handy with the fine mechanisms of his equipment. And like the Wright Bros, who went from bicycles to flight, it’s not surprising that Pague, a skilled weatherman and mechanic, should be drawn to bicycling.

Pague’s bicycling activities come into focus in May of 1897. Perhaps coincidentally, the world of cycling was changing just then. The economy was finally coming round after four years of depression after the Panic of 1893, and bicycling numbers were growing dramatically.

The preeminent national bicycle association, the League of American Wheelmen (LAW), was facing open rebellion over their prohibition of Sunday racing. In the so-called “LAW Secession,” the California Associated Cycling Clubs formed their own racing circuit, and the LAW’s own advocacy efforts dimmed. The Oregon Division of the LAW had been active mid-decade, but now there was a vacuum. And bicyclists were everywhere. 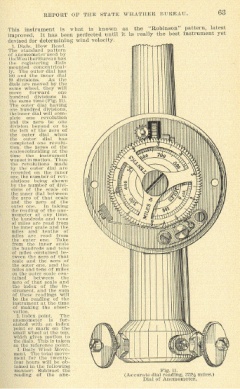 Pague was born on December 9, 1862 in Carlisle, Pennsylvania. In 1882 just as he was turning 20, he joined the instructional school of the US Weather Bureau. The Bureau was newly formed and had evolved out of the Signal Service of the US Army in the 1870s. The country was vast, the weather still mysterious.

Pague moved to Oregon in 1886. He was in the Oregon National Guard, and reported on weather from Roseburg in the late 1880s. Finally, in 1888 he was appointed observer in charge in Portland and in 1898 became Forecast Official in charge of the Pacific Northwest Division. He served this post until 1903. His first office was in the Kamm building on SW First and Pine. Later he worked in the Oregonian building at SW Sixth and Alder. He lived in the Piedmont neighborhood on Williams, very near Penninsula Park.

Pague’s post in Portland was a prestigious one. Forecast Official was the second highest grade in the weather service, and there were only three others, in Washington DC, Chicago, and San Francisco. 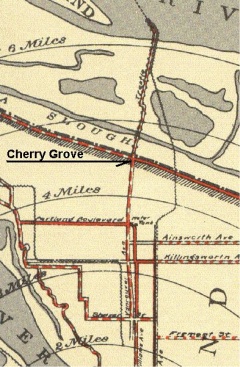 Pague was no ordinary weatherman. Nor was he an ordinary cyclist.

In the May of 1897 Pague was managing work on a citizen-built cycle path through the Piedmont neighborhood along Williams and the Vancouver road near his home. [Editor: For a description of cycle paths from this era, check out this article by Lundgren.] Cyclists often rode to Vancouver, and the paper noted that:

At the junction of the two roads [Columbia and Vancouver] is a beautiful grove of cherry trees, which some enterprising ladies have recently fitted into a veritable fairy bower, surrounding the grove with canvas, and will serve to all who hunger and thirst dainty sandwiches, ice cream, and fresh milk form the dairy, of which the grove is a part. They have named this delightful wheeling resort Cherry Grove, and that this certainly means much to all wheelmen goes without saying.

Just a month before this, a group of cyclists had met to consider banding together to form an advocacy group.

The Portland group had its first meeting in April at the Chamber of Commerce, and the chair, Judge Henry H. Northup, said:

This is a wonderful age, but the most wonderful invention of the age is the bicycle. It is an invention of purely mechanical principles: it is driven not by electricity, not by steam. It might have been invented 500 years ago if they had had the mechanics. It is necessary for us to look out for the interests of the wheel. There are more wheels than any other vehicles in Portland. 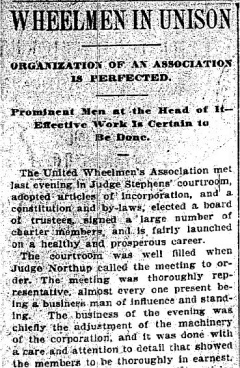 By the summer of 1898, Pague was on the board of directors for the UWA and President.

The club had decided to push for legislation and in December of 1898 Pague was working on the Cycle Path law. He made trips to Salem often, to lobby, to socialize, and to report on crops and weather. In February, Governor Geer signed the law.

That summer the Statesman reported that Pague “was in Salem yesterday, having come down from Buena Vista, accompanied by the Misses Anna and Margaret Longacre. Mr. Pague is visiting at the Longacre home for a few days, enjoying an outing with his wheel and camera.” At the same time, the Polk County Observer, published in Dallas, was printing the weekly crop reports that Pague assembled as part of his weather job. He seemed to be everywhere.

In the early 1890s Pague had studied law with the University of Oregon, and had moonlighted as a lawyer early in his career. In 1903 he began to officially practice law in Portland.

In a May 1899 trial he was both bike advocate and legal advocate. A reporter noted:

Weather Prophet Pague made his debut as attorney in the municipal court yesterday afternoon, as assistant prosecutor in the case of the City of Portland vs. H. Bush, accused of driving his horse and buggy across the Vancouver bicycle path. Mr. Bush was not present, but his attorney was on hand to watch the corners and see that the prosecution did not have things all its own way. Deputy Sheriff Albert Gee testified that he had arrested Bush in the act of driving over the path to avoid a puddle near the end of Williams avenue plank road…

After the trial The Oregonian editorialized on self-policing among bicyclists:

H. Bush was found guilty of driving on the Vancouver bicycle path by Judge Hennessy on Wednesday. So far, so good, The United Wheelmen’s Association, who pushed the prosecution of the offender, have acted entirely within their legal rights in their efforts to “protect the paths.” Now let them show equal zeal and energy in protecting the public by making complaint against certain notorious scorchers who use Sixth street, Morrison street and other business thoroughfares as a race track on which to display their antics.

After 1903 Pague’s formal practice appears to have focused on wills and bankruptcy proceedings. Pague died on January 8, 1915 after a kidney operation at St. Vincent’s. He lived in NW Portland on Pettygrove.

For Pague, facts mattered. He exhaustively demonstrated that Oregon wasn’t all wet, as many would have it. He also understood and actively worked to promote and protect the public goods of bicycle infrastructure. For this he is surely one of Oregon’s bicycle heroes.

I didn’t know the bicycling tradition in Portland has such deep roots.

damn. now i want to ride out to cherry grove for “dainty sandwiches, ice cream, and fresh milk form the dairy” but i fear i shall be quite disappointed!

ah, the law secession – not just sunday racing, but road racing as a whole as well! those easterners in the law didnt cotton to racing on the open road, and had designs on banning it. up the cacc! 🙂

thanks for another taste of history, eric!

This is a great story.

I think this is an excellent contribution to our Oregon bike world and wish that the 2007 history lecture would be repeated so we can hear more. THanks to Eric and Jon.