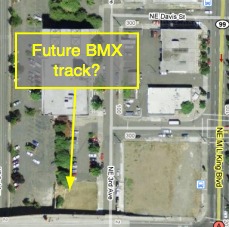 An article published Friday in the Portland Business Journal makes short reference to some very interesting news about the Burnside Bridgehead project site.

The four acre site (at the northwest corner of the intersection of Martin Luther King, Jr. Blvd. and E. Burnside) was initially planned to be a gateway to the Central Eastside. However, the $260 million project fell through last year and is still on hold.

Now, Portland Business Journal reports that the owner of the property, the Portland Development Commission (PDC), has entered into an agreement with Beam Development to create an interim plan for the site. Here’s a snip from the PBJ artice:

In the short-term, the site will be put to temporary use as a parking lot and bicycle motocross park while the PDC and Beam work out development plans and wait for the economy to revive enough to launch construction.

According to PBJ reporter Wendy Culverwell, the track would be done in conjunction with the Portland Parks and Recreation Bureau. The facility would likely be what is known as a “pump track”, where BMX riders roll through small, rolling jumps, step-ups, and berms. The location is just a block from the Burnside Bridge skatepark.

I have a call into Kia Selley at the PDC (she’s their Burnside Bridgehead project manager) for more information. I’ll update this story once I hear from her.

I’ve heard the plan is to make it a Mountain Bike ‘Pump Track’….

Hell yeah! as long as it doesn’t get sanctioned to the point you can’t ride a mountain bike there, that park will be wonderful!

Why have it be an interim plan? We need more BMX tracks in town. It’s a great way for kids to enjoy bikes and have fun racing. I bet a fair ammount of us adults would get into it to. If it’s bike racing on dirt then I’m in!

That’d certainly make for some entertainment for the folks penned upstairs at Hooper Detox across the street, aside from the usual dealers circling the block.

This could be a boon to cyclocross in the long run, too. Many of the worlds best CXers (like Swen Nys) started out BMX racing.

HELL YEAH!!! this is what we need, there aren’t any tracks around here really. Hopefully the hateboarders at the park wont cause any problems

By ‘hateboarders’ do you mean the skateboarders that actually built the Burnside skatepark for skateboarding?

we could mountain bike in the woods. But nobody wants to do that in Portland.

I’m just going to say that I find it slightly humorous that they call it Bicycle Motocross. Last time I checked, there aren’t motors on BMX bikes.

Best news I’ve heard in a while!

Talk about a good time!

Sounds cool for BMXers etc, Glenhaven also allows bikes. Hopefully they stay in that area & don’t get the silly idea that the Skatepark is for bikes too! Burnside Skatepark only allows skateboards. Maby thats why the hateboarder comment is there..lol

headlines with question marks read as bad as tabloids.

It’s just like regular motorcross, but without the engine.

This would be a very beginner type track with very small rollers and such. It will not be made for “big kids” with big jumps or BMX racing in mind. As such, I have been making it clear as a member of the citizen advisory committee representing the skatepark (or hatepark as someone so lovingly put it)for the site, that I think it is a very bad idea. Also, keep in mind that the BMX track is just one of several ideas for the parcel.

I wanted to make sure my intentions are understood. I do not care about the BMXers themselves and agree that an inner-city BMX track would be great. I totally enjoy watching the better riders tear it up at the skatepark. It’s the confrontations between those that don’t know the “unspoken rules” of the skatepark that concern me. The proximity to the skatepark is the only concern I have.

I’m a skateboarder, who helped build that Burnside skatepark, beginning back in the late summer of 1990.

Little bike riders (the BMX equivalent to street skaters as opposed to dirt track racers circa 1977) were there, too. They’ve been riding the place in the morning, by agreement, since the park started.

the pump track is a cool idea, or they could just keep adding onto burnside. people hating on bikes are a bunch of herbs, move on. everyone who goes to a “Skatepark” is tryin to have fun, at least thats why I’m there, not to hear people cry. If you scared go to church!

People aren’t hating on bikes, Max. Burnside was built by skateboarders for skateboarders. So far BMXers have not shown the same collective dedication to organising themselves but the people behind Burnside have still been cool enough to allow BMXers to ride at certain times.

Pete I am glad you aren’t hating on bikes. A GROUP of skateboarders built burnside, but the WHOLE skating community benefits from it, why stop there. People play kickball at baseball fields all the time, I don’t see baseball players getting tense at kickball players..then again I don’t play baseball.

THAT IS RAD!!! SCREW THE TRACK, JUST BUILDING SOME JUMPS NOW…. AND THEY’D BE READY BY THE SUMMER!

I think this is amazing at any level, beginner or not. I myself would get a bit bored pretty quick if it were small, but something for BMXers is better than what we have now. As for Burnside park, the skaters did that on their own and granted, now, they get skateparks all over, they do share it with us. I know at my old trails, we would get upset when mountain boarders would come to our trails, same thing. I have many friends who skate and see both sides to it. This park being next to Burnside won’t affect people coming in, maybe more spectators, but Burnside is a park that takes skill, not just any Johnny 4th grader can ride that place, not too mention they would get kicked out pretty quick anyways. All in all, I’m stoked BMX parks are even an idea being thrown around. I hope I can help in anyway getting this thing going!

If you know about riding Bside, you know.. if you don’t you prob. don’t need to know..
I think everyone is stoked seeing someone riding do the unbelievable there, at the right time.
The real people misrepresenting are the people with bad attitudes, on both sides.

BMX is Bicycle MOTO Cross. As in each race is a Moto. The R was dropped.

Kent speaks the truth up there. I like that people who don’t know anything about the BMX and Skate scene in Portland are the only ones commenting. There are unspoken rules that have been agreed up for many years at the park. The BMX community has also donated money and time to help pay for and build new sections of the park. If you were to tear it down you will find bike parts buried under the concrete from fill days. We also have dried and cleaned the park in the mornings when it has needed it allowing for the sessions to be had during the rainy season.

I do think that Portland and the surrounding areas need race facilities, but that particular parcel will be too small for families to enjoy sanctioned racing. Also if the pump track is being provided as some sort of concession to the BMX community, it falls severely short of being anything worth while.

New blog post: Is a BMX track coming to Burnside and MLK? http://tinyurl.com/ckoenv