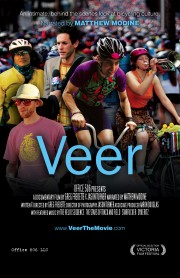 Veer, a feature length documentary film that focuses on Portland bike culture, made it’s world premiere at the Victoria Film Festival last week. The screening was the first time the film had been seen outside of Portland.

Victoria resident Lauren Warbeck was at the premiere. She wrote via email that so many people showed up that many were turned away and a second screening was added. Warbeck added that the crowd was energetic and that there was “a lot of interaction with the film”. “People laughed a lot…They LOVED the zoobomb and the tallbikes. The whole theatre cheered and clapped when the bicycle bill got passed. Basically, the whole theatre was pretty amped and inspired.”

The film is also showing its potential to not just entertain, but to inspire others to create a healthy and diverse bike culture of their own.

According to Warbeck, during a Q & A session after the screening, a representative from the Greater Victoria Cycling Coalition expressed his hopes that Victoria can have as vibrant a cycling culture as Portland one day (Warbeck wrote that she and others “guffawed aloud” when they heard that because, “Victoria has a rad bike scene already”.)

Looking back on the night, Warbeck wrote, “The whole experience was pretty sweet. Folks were entertained, inspired, brought together. They got exposed to parts of bicycle culture and communities that they’d never seen. She also said the list of people she plans to bring to Portland for the big Pedalpalooza fest in June is growing fast.

Can’t wait to get it on DVD! Please include some of the stuff that had to be left on the cutting room floor!

BTW, That was Me (the guy in yellow) with the crutch, and the leg in the brace.

We are ALL traffic!

Can’t wait to go to Victoria

As a Victoria resident, I can say that we have a pretty good bike culture up here, but one of the major problems we have is that Victoria is actually 13 different municipal governments with one regional one, which makes it a lot of work to get city-wide improvements.

It really was an incredible experience in Victoria. What an amazing and bikey city. There are 20+ bike shops within the city limits alone. We did our best to meet with as many people as we could, riding our bikes to 12 shops to introduce ourselves. What we found is a definite affinity with our North Cascadian bike neighbors. They’ve got a great diversity of groups and everyone we met was friendly and just plain awesome.

With ferries running out of Seattle and Port Angeles the trip to or from Portland is under 5 hrs. I plan to be heading back up there to spend some time just relaxing and riding the Galloping Goose trail, maybe catch some bike polo next time and I’m also pretty stoked to see the Velo Vixens new show. I hear that they’ve changed their approach and are doing some wild and intense bike artistry. Maybe they’ll be down again for Pedalpalooza this year.

Overall, I can’t thank the Victorian bike community enough for embracing and supporting the film and hanging out with us while we were up there. I seriously hope there is a contingency that comes down for MBW 2009 in a couple weeks.

As far as more Portland screenings keep an eye and ear out as we are trying to get some details worked out to make that happen.