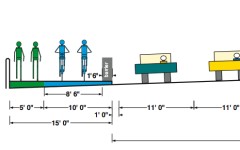 Cross-section detail of new bike/ped
improvements on Morrison Bridge.
(Currently, there is only a 5-foot sidewalk.)

An estimated $3.2 million project to improve the bike and pedestrian facilities on the Morrison Bridge — that was first identified in 1994 (yes, 1994) — is finally set for construction.

Today I confirmed with Multnomah County (they own the bridge) spokesman Michael Pullen that the contractor on the project has just received “a notice to proceed” with construction. Pullen says signs about the project should go up next month, construction will begin in March, and the entire project should be completed by the end of this year.

For advocates who have spent years tracking the (lack of) progress on this project and for anyone who bikes (or would bike if it was safer) over the bridge, this is welcome news.

Here’s how it looks right now: 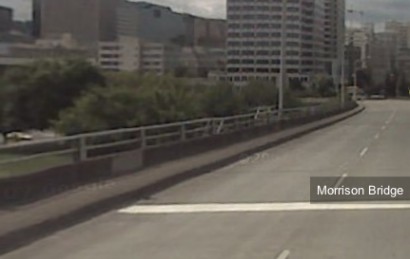 Notice that there is just a small sidewalk and no bike-specific facilities. Also, there is a very sketchy metal grate in the middle of the bridge.

And here’s what it will look like before years end: 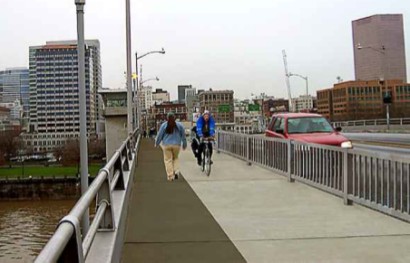 And here’s the design concept mock-up. The railing will provide a crash barrier and bikes will no longer have to ride on the metal grate.

I am still awaiting final design drawings and cross-sections (the latest docs on the County’s website are from an open house in 2003), and I will post those details later. It is important to remember though, that the bike/ped improvements will only only happen on the south side of the bridge and it will be a two-way facility. Pullen said this was due to safety concerns with freeway on/off ramps on the north side.

I asked Pullen why this project, which officially began in 2002, had taken so long to get to this point. He said there were two main reasons. The first, is that they were asked to halt any construction because of conflicts with other construction projects going on in the area (he mentioned downtown light-rail and the Burnside Bridge projects specifically). And secondly, said Pullen, “there were some design challenges.”

Pullen said it took them longer than usual to get the Oregon Department of Transportation (ODOT) to approve the design. The design was tricky in part, he said, because it includes the crash-worthy barrier (as seen above) on a bridge that opens in the middle. Once the design was approved, Pullen maintains the project has moved forward at a “normal speed”.

Stay tuned for more on this project. I’ll have more soon (including major changes for bikes and peds on the ramps up to the bridge from SE Water and Naito Parkway) once I receive information from Multnomah County. In the meantime, check out the official project website.

Seems right for me to grab the first comment slot, because I’ve been the loudest complainer about the delays on this project. It would be easy to dwell on frustration about how long it’s taken, but instead I’m just going to say that I can’t WAIT for this facility. It’s going to be well-used from day one, as a needed backup to the overflowing Hawthorne.

Back when we secured MTIP funding for this project in 2005, I was looking forward to taking the new pathway from my Belmont apartment to the old old old BTA office (on SW 12th & Morrison). Now I look forward to taking it from Alta HQ to meetings and errands downtown. It’ll be a stone’s throw from our office!

Currently I believe that there’s a sign warning about the metal grating on the Morrison’s deck. Interestingly enough, I’m almost positive that it’s an image of a bicycle, not a motorcycle. The only thing is, I don’t think there’s a way onto the bridge where there isn’t a ‘no bikes’ or ‘non-motorized vehicles prohibited’ sign of some sort.

Am I wrong? or have bikes been blocked from all ramps?

You’re absolutely right, John. It’s Westbound between the I-5 entrance and exit on the right. …and it’s what I’ve always planned on pointing to if I ever got busted riding on the Morrison. Luckily, come March, that won’t be a problem anymore!

I occasionally ride over the morrison bridge because I am comfortable enough with riding in the lane and am very glad I will not have to ride over that metal grate anymore (I am very scared of heights for one and ride skinny road slicks).

Yes… it has been a long slog from those first public design meetings years and years ago… followed by nasty surprises with high construction bids… and then delays when the Burnside and Broadway bridge work prompted the county to decide not to disrupt a third bridge at the same time.

But now the long deferred improvements are coming. Hurray.

The freeway-like original design does mean traversing the Morrison will be a bit trickier than most bridges. Because there is no safe way to put a bike facility on the north side, westbound riders will be riding against the motor vehicle flow (but on a separated path of course). But then at the downtown/west end of the bridge, riders will have to maneuver a quirky route to avoid dumping into the street going the wrong way.

So put on your thinking caps.

This is exciting. The view from this bridge while riding over (especially from the east to the west) is pretty cool. The metal grate is scary so I’m glad to see something safer coming.

Pinch me — I must be dreaming. Is it April 1st already? I can’t believe it! This is great news!

Way cool, and many thanks to everyone who kept pushing for this to get done!

Wonderful news! I was disappointed when the bike lanes disappeared from the Morrison Bridge after the Hawthorne Bridge renovation was completed 10 years ago. But it is good they are coming back.

The one time I road my bike over the bridge, I nearly became paralyzed with fear of heights as I realized I was riding over the grates.. I just assumed all the bridges were bike friendly.. about time is right, but thank goodness it’s happening at all!

3 cheers for Phil Goff, wherever he may be…

I’m still waiting for the bike friendly gondola on the Fremont bridge, huff.

Wow…finally the 11-year wait is over!! It was I–as an upstart urban design grad student new to Portland–who began the Morrison Bridge campaign in the spring/summer of 1998 while it was being used as a temp facility during the Hawthorne closure. I handed out over 1000 bright-yellow postcards addressed to the Multnomah County chair demanding that the temp bikeway be made permanent. While we lost that fight, it forced me to develop a vision for the bridge that included a number of diagrams and sketches to use as lobbying tools. A few additional years of postcards, letters, and testimony at multiple MTIP hearings over at Metro did the trick: the construction funding was finally in place when I left Portland in 2004.

I’m thrilled to know that the next time I plan to visit (from Boston where I live) I’ll be able to ride my borrowed or rented bike over the bridge that for so many years I dreamed would be accessible for everyone!

I attempted to go over Morrison once or twice when I first moved here. the first time I got to the metal grate and just slammed on my brakes! I just knew I was going head first over that thing. This will certainly help get a bunch of people across the bridge easier and safer. hurrah!

Too bad this is going to dump cyclists out on Water Ave in the SE Industrial District, instead of extending to SE Grand.

I said back in November that this was a done deal, and barring problems would be done November of 2009. Thanks Jonathan for reporting on this.

I had my qualms about the design for this improvement when it was reported on about a year ago or so. Roger Geller came in and briefed the Multnomah County Bike/Ped Committee on it a few months ago and showed us the current design, and I feel a lot better about it. I think it’s going to work out pretty good and I’m really looking forward to it.

After this project it will be time to turn the city’s attention to the inadequate bridge access across I-405.

Anyone else remember having to ride over the Morrison Bridge for a number of months way back when (early 80’s?) when the Hawthorne closed suddenly for emergency repairs — ?

them was some glorious days, when riding any kind of bike qualified as truly aberrant behavior, and every 3rd car either yelled or threw something at you. [sigh]…

Well, I’m glad this is finally happening. I wonder how many years it’ll be before ODOT admits that you can actually have a stop sign or a traffic light at the “bottom” of an off-ramp. (And acknowledges that some of them exist right here in Portland!) All the on- and off-ramps to freeways should be right-angle turns. There should be no free-flowing ramps off of or on to city streets. Because ODOT continues to say these free-flowing ramps are a must, we’ll have to live with the “dead zones” surrounding freeways until the “freeway” engineers are overturned!

As reported Wednesday on OLCV’s blog. What, no hat tip? 😉

Great news! The need to connect via Water Ave won’t be the most convenient, but it sure beats what we have now.

Like many others in this thread I have ridden across the Morrison exactly once, and never again since. What freaked me out was not the metal grating (those don’t bother me too much) but the speed and aggressiveness of the drivers.

Many drivers always seem to be scarier near freeway on- and off-ramps, presumably because their brains are already anticipating the freeway or haven’t made the full transition back to city street speeds.

Can’t wait to see this built. I had no idea it was still in the pipeline.