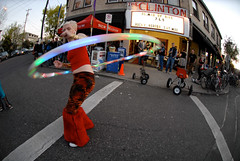 The party outside Filmed by Bike
will have much more breathing room
this year.
(Photo © J. Maus)

Ayleen Crotty, the bike culture dynamo behind Filmed by Bike, stopped by our office yesterday with an update on what’s in store for the event this year.

The big news is a free street party on opening night made possible by the complete closure of SE Clinton Street to motor vehicles from SE 25th to 26th. Much of the fun of Filmed by Bike happens outside the theater, and in years past, passing cars have dampened the size and the spirit of the party. Having a closure will not only make it safer for event-goers, it will also open up new possibilities like a beer garden and community booths and other vendors.

The open street will also give Crotty a place to park bikes. She says she’s rented bike parking facilities to handle up to 650 bikes. 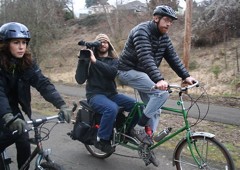 Portlander Mike Vogel sent in this photo
of his filmmaking in action.
Deadline for entries is
February 15th.

Further sweetening the opening night pot is an additional, late-night screening. Crotty says due to overwhelming demand, she’ll add an 11:00pm screening (in addition to screenings at 7:00 and 9:00).

Also new in 2009 is a commitment from the proprietors of the Clinton Street Theater to give Filmed by Bike a full, one-week run. According to Crotty, this gives her the opportunity to present “Best-of” screenings as well as other special events — like a filmmakers panel discussion — throughout the week.

Crotty also reminded us that the deadline for film submissions is February 15. So, if you’re still shooting your film, it’s time to wrap it up!

Sweet news about closing the street to cars. Should make a fun event even better.

Thanks for the write-up, Jonathan! We’re very excited about this year’s festival.

The New Belgium Street Party is definitely one of the coolest additions to this year’s event. We’ll put a beer garden out there in the street too, if we can (it’s up to the city).

Count on double (or more) the bike parking and WAY more fun.

See you in April,
Ayleen

Way to go Ayleen, and all those involved with FBB – sounds like it’s going to be a great show this year!

Good news and a great idea. Community businesses need all the help they can get right now. If this can be of benefit to them, it could be a great help to FBB in the future.

Besides, some food other than pizza would be really nice while waiting in line for the show.