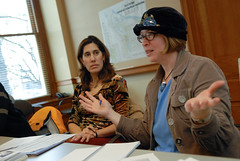 It’s been nearly two years since the Bureau of Transportation kicked off an effort to update Portland’s Bicycle Master Plan.

Since that time, the plan has gone through quite a few speed bumps. In April of 2007, just two weeks after the update effort started in earnest, former Mayor Tom Potter slashed its $100,000 of funding. Thankfully, Potter realized the error and restored the plan’s funding a few weeks later, but that episode is just one of several things that has temporarily diverted attention from update process at one time or another.

Now, with a secure $200,000 budget (thanks in part to a $75,000 ODOT grant) and a recent staff appointment to keep things on track, the bike master plan update effort seems to be rolling again.

A key part of the update effort is the Steering Committee which is made up of the PBOT project manager and community stakeholders. Reflecting the current buzz in the bike movement to bring non-traditional partners into the fold, the Bike Master Plan Update Steering Committee is made up of a diverse range of professionals. Around the table at the January meeting were reps from the State of Oregon Public Health Department, neighborhood associations, local business owners, and the tourism industry.

(Also at the meeting, and on the committee are Mayor Adams’ chief of staff Tom Miller and his transportation policy advisor Catherine Ciarlo.)

The co-chair of the committee is Bike Gallery owner Jay Graves. At the outset of their last meeting, he encouraged everyone to think long-term. “We’re looking at a 20-year plan,” he said.

Once completed, the plan has potential to become a very important road-map for biking in Portland. Its policy implications will depend a bit on timing (like whether it will be adopted in time for inclusion into the all-important Transportation System Plan), but regardless, it will help city employees, supportive elected officials, and advocates move forward with their vision of making Portland a truly “world-class” bike city. 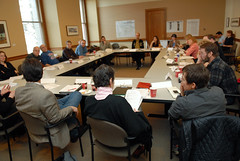 At their January meeting, the Steering Committee focused on putting members into special working groups. The groups — which include everything from “Vision and Scope” to “Bicycle Parking” and “Enforcement” — will meet separately and then report back to the full committee.

One working group focus that caught my eye was “Mountain Bike Trails”. Off-road riding isn’t something that is typically discussed at a city infrastructure level, but its official inclusion into Portland’s Bike Master Plan is encouraging.

Committee co-chair Mia Birk (former city bike coordinator now planner at Portland-based Alta Planning + Design) told the group that mountain biking has been included because “it’s a gateway activity.” People who might be afraid of riding on city streets, she said, like the appeal of riding off-road and they later become bike commuters. Birk also said that the League of American bicyclists has taken note of Portland’s lack of off-road riding opportunities and that “the community has been on our backs about it for a long time.”

The working groups are meeting at City Hall today and the next Steering Committee meeting is set for February 11th. Another round of open house events is slated for May. Stay tuned for more coverage as the plan materializes.

All joking aside, it’s time to address the lack of Mountain Biking in Portland. Cities large and small all over the country are recognizing Mountain Biking and implementing projects. I visited a small town of Silver City, NM last month (pop. 11k) and they have constructed Mountain Bike trails within their City Park that resides adjacent to downtown. If they can do it, Portland can.

Someone please convince me of the value of urban mountain biking. Recreation opportunities in the city are important, but mountain biking just seems a poor use of park land within the city. In my experience it just creates nebulous space, the trails aren’t good mountain biking, and they aren’t pleasant walking either.

The “gateway activity” concept is great, but is it real, or just somebody’s idea of what could happen? Does owning a husky encourage you to take up dog sledding?

What the League wants has no traction with me. They are just another group trying tell you what you should do, so you think like them. Does anyone on whatever board that sets policy for the league even live in Portland? At some point Portland should be telling the League what is important.

Are the steering committee meetings public?

Thanks, Jonathan for covering this.

Coyote (#2) – with all due respect, that’s a ridiculous example. If this were Anchorage, it might. We don’t have the climate here for dog sledding. Mountain biking, however, isn’t really subject to climate. There are a lot of mountain bikers who would like to be able to ride without having to travel to Scappoose (or further) in order to do so. Portland’s parks cater to all its citizens, why shouldn’t this be a potential use? Forest park is gigantic, and could easily accommodate a few extra trails for mountain biking – there should definitely be discussion about the issue (and as Jonathan has reported in the past – there has been and continues to be).

That said, I do agree that Portland is perhaps more knowledgeable about what is important than the League.

In response to Coyotes note. I’d just like to reference the City of Bend, which has countless miles of legal MTB trails within easy riding distance of downtown. These trails are one of the main reasons that Bend now considers MTBing it’s biggest single tourist draw during the summer months.

On a more personal note, I’d love to be able to go MTBing here in town without having to break the law. As it is, that’s not possible.

Matt, (#4) I made the analogy ridiculous for a reason. How about this, if we build equestrian trails, will people want to use a horse and buggy to get to work? If I play World of Warcraft instead of Grand Theft Auto am I going trade in the Glock on a Claymore? Does Rock-n-Roll promote promiscuity? My point was that Ms Burk threw this idea out, is there really a relationship or support for this? It kinda makes sense, but is it true? Fred’s (#1) analogy is even better.

Brad (#5), Bend is not Portland. IMO Portland has done a super job of sprawl control, but a few miles from downtown PDX is still deep in the city. Public space is precious and will gain value at an exponential rate. In Western Oregon mountain biking on high traffic trails goes to ca-ca in the winter and are over used in the summer. Mountain biking is a sport dependent upon location, and it exacts a high toll on space.

I really do not have a dog in this fight, but I believe that Portlanders should not just take dogma from the League. Portlanders should guard their public space against special interest groups with a ferocious vigor. If you want it, build it, just be ready to live with it.

MTB may be something the City should consider as a recreational activity, but it’s not appropriate for the Bike Master Plan which, if intended to be incorporated as part of the Transportation System Plan, should be focused on transportation demands. Put MTB in the Parks Master Plan where it can compete for public park space along with all the other recreational demands placed on them. If anything, this could just lead to conflicting public documents and end up hurting MTB efforts because it may say a lot and end up doing nothing (because I doubt the people that control the parks pay attention to the TSP).

Coyote, I agree that we need to protect the natural resources within the City, but MTB’g has little more impact than hiking or walking. The value is in allowing MTBrs to ride within the City without having to drive to a trailhead. That saves money for MTBrs, gas, wear and tear of roads, cars, etc. Wouldn’t you like to take a ride in the woods without the noise and pollution of car traffic? In regards to maintenance, local groups such as PUMP are there to perform.

Tulsa needs NO bike plan. We already have the world’s most advanced bike routes, with OVER 1,500 miles of bike lanes.

Engineering and enforcement are not our problems. Cops and motorists love cyclists, especially Biker Fox. ENCOURAGEMENT and EDUCATION are the real challenges.

If the Mayor would quit with being the green HYPOCRITE and get her skinny little bleep on a bike to roll to speaking engagements dealing with going green, instead of driving global-warming, people-killing monstrosities of glass, metal, and rubber on four-wheels, problem SOLVED.

The value of urban mountain biking?

How about not having to car-top it somewhere else if you live in the city?

How about because it’s only fair to have equal trail access for bicycles?

Does hiking in the city have a “value”?

SkidMark, walking is always ground zero. Humans settled the world and made the vast majority of it’s history on foot.

I gotta back up Coyote on this one. I think mountain biking is great even though I don’t do it myself. Space is at a premium within the Urban Growth Boundary, and everyone want their cut. Read this article from the Oregonian to see how the regions heavy hitters are duking it out over development and using the last untouched spaces within the UGB: http://www.oregonlive.com/environment/index.ssf/2009/01/builders_starved_for_expansion.html

Now, what exactly are the League and its supporters hoping for with a local mountainbike network? Are you thinking of using vacant lots? Existing parks? Mt Tabor? Do some reading about the battles that have taken place about adding dog off-leash areas to local parks to see how easy it is to get park space reassigned.

Seems to me that the city should be a place for city-oriented bikes and MTBs should stick to their namesakes…minus Mt. Tabor.

Space is at a premium, yet cities like Philadelphia, Detroit, and New York City offer singletrack mountain biking in within their city limits. They have recognized the need in their very urban settings. Very short-sided to think that we cannot do better here in Portland.