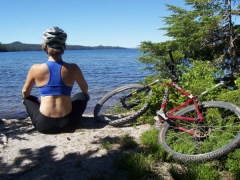 Yoga and bicycling have more in common
than you’d think.
(Photo provided by Ellee Thalheimer)

In Portland, sometimes it seems like there are nearly as many yoga instructors as people on bikes. In fact, those two populations often seem to co-mingle.

A number of yoga studios around town offer deals for patrons who show up to class by bike, and a growing number of yoga instructors are taking the yoga-bike connection a step further by offering classes specifically tailored to the needs of everyday bikers, with particular attention on the muscles that are used the most in cycling. (These bike specific issues, and some suggested yogic solutions, were thoroughly outlined in Yoga Journal a few years ago.)

At People’s Yoga on Alberta Street, for instance, if you bike to class 10 times the 11th class is free.

Uma Kleppinger doing her thing on the mat… 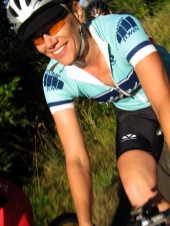 …and on the road.

The yoga-bike cross-pollination might be more than just physical, so says Portlander Tasha Danner, who teaches a yoga for bikers class. “Yoga and cycling are very connected,” she wrote to us via email, “both allow fun, connection to community, focus, body and breath awareness and make us aware of our impact on the environment and those around us.”

Another bike-oriented yoga teacher in Portland is Ellee Thalheimer. Ellee’s yoga expertise was featured in the July 2008 issue of Momentum Magazine (the article also includes some recommended yoga postures and stretches for cyclists).

If pilates is where your heart is, there is also at least one pilates class in town geared toward bicyclists. Pilates bears some similarities to yoga but comes from a much different tradition. Amy Subach offers free, introductory classes geared towards bicyclists and other athletes. From the class description:

Learn how to use your core strength to pedal stronger and longer! Leave with some new moves to stretch and strengthen your legs and entire body.

The classes are at Portland Team Fitness at 3500 NE MLK Blvd (corner of MLK and Fremont). The free sessions are January 10th, 17th, 24th, and 31st, from 8am to 9am. With questions or to RSVP, contact Amy at outstretch{at}gmail{dot}com.

If you know of other similar classes, feel free to post details in the comments. We’d also love to hear if you do yoga and how/if it has made your biking more enjoyable.

In the meantime, I know I’ll be seeing a lot of you out there on the streets and on the mats this year.

I tried to email the address about the pilates class but it was bounced back to me…any thoughts?

Thanks for the heads-up, Jauna. I have corrected Amy’s email address for the pilates class: It’s actually:

I didn’t know Michael Sylvester teaches yoga as well. Thanks for the link!

I would add that if people can’t get to a cycling-specific yoga class because of schedule, they just get to a yoga class, period. Any flexibility training/active recovery is better than none. But for maximum benefit, private yoga ‘coaching’ is optimal to address chronic musculoskeletal imbalances.

Thanks for the press, Elly. Namaste, er, ah… More cowbell!

I have been to Ellee’s class and It is excellent! I recommend it to everyone!

Well I can certainly attest to the increased core strength and flexibility in just about every corner of my innately inflexible body. But what about the flying and invisibility? The article didn’t mention any of that. And yea, I take lots of classes with Uma.

I have to plug BodyMechanics
because Mandy rides her bike with an extracycle to class every day, and is great about working out the kinks after a long ride!

I’m the “bicyclist fitter” that was interviewed for that article (this was over 10 years ago) while working at the downtown Bike Gallery. I was training under Michael Sylvester and taking Yoga from him at Julie Lawrence’s studio.

Just read this-thanks Elly! I’ll be holding more yoga-bike workshops at The Bhaktishop in the summer and spring. Yay to yoga and biking! More, please?

My yoga teacher is also a cyclist, and she’s great about making sure to stretch our hamstrings. Most people, especially beginners, have tight hams, and it seems like cycling builds up and tightens certain muscles, and yoga counterbalances that by stretching them. Now that I’ve switched to an upright bike, my quads are getting stronger and tighter and she’s thrown in some extra positions that stretch those. Biking and yoga are a great combo.

Special workshop coming up at an Iyengar studio downtown.

More stories like this please. It is interesting to see how biking permeates other aspects of our local culture.

Some people may be aware of Portland’s international reputation for argentine tango. While there have been no peer-reviewed studies I know of, Portland’s population of tango dancers appears to have a high percentage of cyclists. Enough cyclists that there is a bike tango website (hosted by Jeff Mandel of exitshoes whose shoe making and bike saddle designs have been featured previously on bikeportland.org) and a dedicated community of tango cyclists that regular ride together to milongas. This would be a nice feature for bikeportland.org:

Gudmestad Yoga Studio offers several “yoga for athletes” classes. This is where Michael Sylvester teaches along with several other good teachers (between them they are runners, skiiers, cyclists and PTs).

Oops, my mistake, it was Julie Gudmestad’s studio.

Uma #5:”I would add that if people can’t get to a cycling-specific yoga class because of schedule, they just get to a yoga class, period.”

ditto that. As an aging cyclist (well i guess we’re all aging, aren’t we?) I’ve found yoga to be a great way to maintain the flexibility that cycling – and aging – tends to deprive me of, and to enhance my comfort level on longer rides.

and a shoutout for Portland Yoga Arts on NE Glisan/45th – great studio & people.

As a cyclist and yoga instructor it is great to see the increased awareness of the benefits these two disciplines provide to the body and mind. This spring we will be opening a new venue in the Coast Range for those wanting to get away from the city by bike for the weekend, enjoy the natural enviroment and practice yoga in our new yoga studio. In the weeks ahead look for more on the Coastal Mountain Sport Haus.

Yoga is for posers.

Core Power Yoga locations offer free mat rental to cyclists, which is a nice plus, and core strength is great for biking. During the cross season, my yoga classes there helped me recover between races.

Just another plug for The Bhaktishop-our mats are always free! And we host the yoga bike ride during Pedalpalooza. And we have FREE yoga on Wednesdays at 4 pm. And by donation yoga in Fridays. And lots of bike racks!