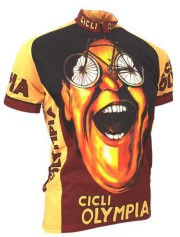 The Retro Image Apparel Company is the latest addition to Portland’s growing “bicycle industrial complex”. The company designs and markets bike jerseys adorned with vintage poster graphics and iconic characters like The Grinch and Popeye.

I spoke with the owner of the company, Roger Mallette, yesterday. Mallette said he has moved into a 4,000 square foot warehouse on SE Madison (at 2nd) that he’s sharing with bike apparel retailer Doug Dugay and his BicyclingHub.com business (I profiled Dugay in November 2007 at his previous location on SE Water Street).

Mallette said Dugay was one of the first sellers of his Retro Image line when it launched five years ago and that the two have remained close friends ever since. 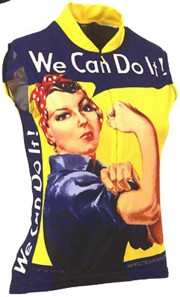 For the ladies, Mallette has created
this jersey based on the iconic Rosie
the Riveter character made popular
in the 1940s.

Retro Image Apparel was originally based in Seattle, but Mallette moved the business to Chicago for two years before returning to the Pacific Northwest in December. When I asked him why he came to Portland instead of returning to Seattle, he said, “This place is just a little slower-paced for me and I like the geographic proportions of this city.”

Mallette launched Retro Image Apparel in his bedroom with just $250 dollars. But now, he says, his business is “very successful” and the jerseys are wholesaled worldwide. Retro Image is distributed in the U.S. by Quality Bicycle Products and Mallette also has wholesale agreements with companies in Japan, Germany, Australia, and Taiwan.

cool graphic on the back of that jersey…

that’s cool. I have gotten a few catalogs from them and thought about ordering something, but I much prefer being able to try something on, so I hope they have a retail store as well.

Love them! It’s like people’s vintage posters applied to something so opposite where you normally see it. Like a dining room framed print. I gotta get designing stuff like that!