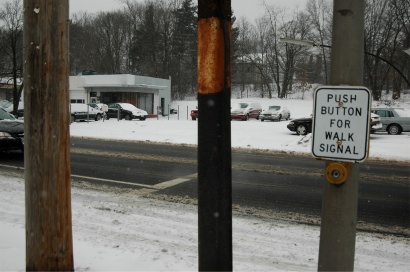 The view from my old bus stop on Whitney Ave hasn’t changed much in 20 years.
The white band on the center pole marks the stop, in lieu of a sign.
(Photos by Elly Blue)

After a warm, dry week, New Year’s Eve brought us another big snowstorm here in Hamden, Connecticut (my hometown, just north of New Haven). At around noon it was snowing hard, the wind was blowing, visibility was low, and the streets were covered with increasingly packed and rutted snow. I decided to take the bus downtown.

The bus was delayed because of the snow, so I had plenty of time to stand there and think about my experiences on the J bus over the years. This was an old familiar feeling — this was my bus line for years, and service was always infrequent and unpunctual.

Close-up of pole on right. The same pencilled
graffiti has directed walkers to “Press your
middle finger on the button!”
since I was a young kid.

Something which I’d never really noticed before, but which now strikes me as crazy is that on CT Transit’s the J line here in Hamden, there are no signs. Instead, you have to look sharp for a faded band of white paint on a telephone or streetlight pole every few blocks.

What’s more, in the 20 years since those markings were last painted, CT Transit has eliminated some of the stops, but without removing the markings. My friend Mike, whose primary mode of transportation for decades has been the bus, was chewed out by a bus driver last month for waiting at a stop with a white band where service had been recently discontinued.

I definitely get the sense that the bus system has never been a priority in this region. Hopefully that will change in the future — they’re at least going to have to repaint the white sections on those poles at some point.

Did I ever tell you about the time, way back in 1990, where I caught the J bus with my step-sister and her friend from Waterbury? We were on our way to the New Haven Coliseum to see…Motley Crue! With Faster Pussycat opening up, even! The back of the bus had these drunk dudes who were doing their own renditions of the Top 40 hits that were currently heard on KC 101. Beautiful stuff. Their rendition of Warrant’s “Heaven” will forever be etched into my mind.

And more on topic, at least the CT Transit buses in the New Haven region have bike racks on them finally. It made things easier on my last few visits. Now if they could get the F bus to run more frequently and later to the Valley, I’d be all set for my next visit.

Sadly, they don’t “have” to repaint the signs. Sure, it is a good idea, but why would the bus want to slow down to pick up passengers (just kidding).

Boise operated flag down stops for years and have just now decided that actually having designated stops might improve awareness that the service exists.