Now that Portlanders have experienced a “real” winter storm (not the occasional dusting of snow we usually get), some folks are beginning to think about how to equip themselves to ride through anything.

If studded tires aren’t enough, maybe it’s time to consider the Ktrak. This morning Jack Bog reminded me of this bike, which I used to chuckle at when I’d see it at the industry trade shows… 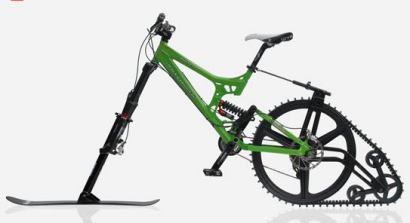 The Ktrak is a $499 kit that will convert an existing bike into a full-blown snow machine.

Somehow, that doesn’t look as silly to me as it used to.

If you’re still searching for options, how about a set of chains for your tires? 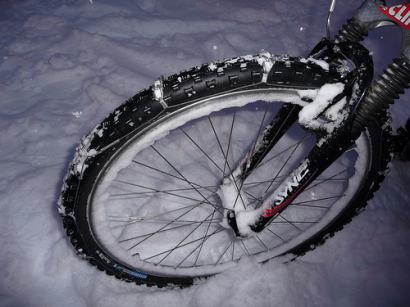 (Photo by K’Tesh via the BikePortland.org Photog. Pool)

These chains were spotted by reader Jim “K’Tesh” Parsons out in Beaverton. They look very well-made but I’m not sure where you’d find these in stores (anyone know?). If you’re feeling industrious and if riding around with screws sticking out of your tires isn’t your thing, check out this DIY how-to on how to make your own set of bike tire chains. Also check out IceBike.com for more on bike tire chains.

What sort of heavy artillery have you broken out to keep riding in this crazy storm?

UPDATE: I had a feeling some of you would bring up the Surly Pugsley. Here’s a photo of a custom Pugsley I reported on back in 2006. Two of them were built up for a Nike VP by Northeast Portland-based Cyclepath.

With 3.7-inch tires, the Pugsley was made for snow-biking.
More photos here.

Of course, if money was no object, the bike I’d choose over all others would be this handmade beauty by Jeff Jones down in Southern Oregon (as seen at the Oregon Manifest bike show): 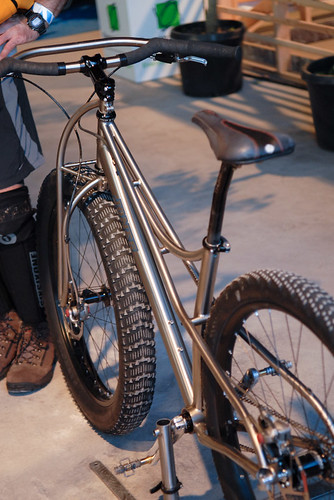 There is also the Iditabike outfits that run in Alaska. They have some amazing setups.

This is much less expensive than I would have thought.

No, sorry,the Ktrak is still silly, and wouldn’t handle what we are looking at now. Check the videos: https://www.ktrakcycle.com/index.html Fun in powder, but don’t even think about ice. Pugsley though, for sure – a little slow, but goes everywhere and loves it.

must… build… ski… bike… for bombing…

I just spotted two people dog sledding down NW 22nd. That has to trump all option listed above.

I was thinking that I’d love to make some kind of recumbent human powered snow mobile… after looking at the Ktrak, I still do.

I want something more stable than a two wheeler… and shocks… it’d have to have shocks.

I ride a horse.

I’m pretty sure City Bikes Annex has some bike chains.

A cross bike people! I’ve been riding every day of the snow on one, and it’s just not that difficult.

Jeff Jones FTW. That thing is awesome. Is it wrong of me to want one, you know, badly?

I fell in love with that titanium beauty by jeff jones the second I saw it. It rides 100000x better then it looks. god damn its amazing.

I ride a cross bike and it kept sinking in the slush today. Plus braking was really bad from the ice and slush clogging the fenders and brakes. Something with fatter tires and discs would have been just the thing.

Last week though was fine on the ice. If this weather was regular I would really consider something like the pugsley with disc brakes and fat tires. Otherwise I’ll hang on to the cross bike but won’t claim it is ideal.

Where does one acquire that ’25’ basket?

I was running the skinny studded tires last week and they worked great on the ice, but they were useless once the snow got deep.

Fat tires and low pressure is the ticket for the deep stuff. 29×2.35 gets me through most of it. Although still not in the same league as the Pugsley’s 4″ tires I’m told.

You can also use Zip Ties. You will go through a bunch but they help.