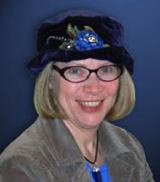 Ellen Vanderslice is the new
Project Manager for the
Bike Master Plan Update.

The City of Portland’s languishing effort to update its Bicycle Master Plan just got a shoot in the arm. Ellen Vanderslice, an effective bureaucrat and well-known activist for people-friendly cities, has been selected as Project Manager for the Bicycle Master Plan Update process.

PDOT staffers have been working on an update to the all-important plan for nearly three years now. Our current plan was adopted by City Council in 1995 and it was intended to be updated in 2005.

(For a summary of the plan’s importance to bicycling in Portland, see the story, Portland’s “Platinum” Bicycle Master Plan gets rolling which we published back in April 2007).

“I grew up to be an activist because I disliked the dominance of automobiles in our landscape and in our culture, and I wanted to change that.”
— Ellen Vanderslice

Vanderslice should provide much needed firepower to help move the update process forward. Insiders and PDOT staff working on the update have been grumbling for months that it has been understaffed and underfunded (remember when Mayor Potter tried to cut its funding? Also, at a recent Master Plan Steering Committee Meeting, PDOT bike czar Roger Geller lamented that the update effort was being done “on a shoestring” budget).

Vanderslice says she was approached by several people involved with the update effort before taking on the assignment and eventually, Mayor-elect Adams “agreed it was a good idea”.

Vanderslice is most well-known for her work on pedestrian issues and she describes herself as a “radical pedestrian”, but Vanderslice has the diverse experience and long-range insights that will serve her well in this new role. 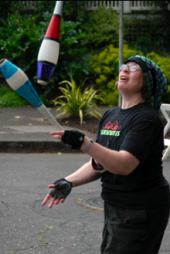 Not your everyday bureaucrat.
In this photo, Vanderslice juggles
while volunteering at
Sunday Parkways last June.
(Photo © J. Maus)

“I come to it with insight into several perspectives,” she wrote in an email to me yesterday, “I am an architect, a transportation project manager, a former neighborhood transportation committee chair, and a parent, to name just a few.”

She’s also been riding her bike in Portland since she moved here in 1976 and says she knows “something about how far we’ve come.”

Vanderslice has worked at PDOT on and off for 10 of the last 15 years. Most recently he has served ast the manager of the “Keep Portland Moving” effort – which is tasked with keeping downtown Portland vibrant and accessible during the light rail construction project. 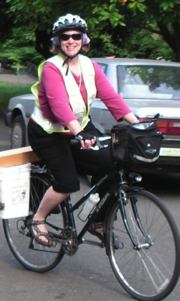 Vanderslice has been riding in
Portland for over 30 years.

Also at PDOT, Vanderslice was manager for several large-scale projects including the Naito Parkway rebuild, the Old Town Chinatown Streetscape project, and others. In the mid-to-late ’90s, Vanderslice worked in PDOT’s Pedestrian Program to create the Pedestrian Master Plan and Pedestrian Design Guide and to complete the Barbur Boulevard Plan and the Southwest Urban Trails Plan.

For more insight into what Ms. Vanderslice will bring to the Bike Master Plan table, I asked her to share a bit more about her “radical pedestrian activist” past. Here’s how she responded:

“I like to call myself a transportation reform activist, because for me it has never been only about walking. I love walking, of course! But I grew up to be an activist because I disliked the dominance of automobiles in our landscape and in our culture, and I wanted to change that. My radical activist side will be a good check on my inner bureaucrat, which might be satisfied with a tidy product that comes in on time and on budget. The radical activist wants more — the radical activist wants transformation!”

I think bike staffers at PDOT and bike insiders will be pleased to have Vanderslice on board. Assigning Vanderslice to manage this effort might also be a sign that Mayor-elect Adams will give the plan more priority than the previous administration.

— For more on Ellen Vanderslice, see her website, EllenVanderslice.com.
— More coverage of this issue in the Bicycle Master Plan section archives.

She seems like she’s got the right stuff for the job. Enjoyed some bits from her website, easily among them, the comments following her remark that she’s a ‘radical pedestrian’.

Though a self described ‘radical’, she’s says it with a sense of humor and a sense of balance, recognizing that a receptivity to other opinions is critical to positive progress.

Also on the website, some informative and entertaining insights on being a big person. Know what ‘Adiposity’ is? I learned something new.

An awareness and recognition by government officials of the fact that street infrastructure has become motor vehicle dominated is critical to bringing about the kind of change that can make that infrastructure more hospitable to people on foot and bike.

My impression is that so many people that drive do so because they’re resigned to the fact that cars have taken over and there’s nothing they can do to reverse the pattern. They think the streets are risky for walking and to consider biking is just playing with your life.

Vanderslice could turn out to be very helpful in helping those people feel there’s hope for the streets to again be friendly to them.

Maybe Ellen is interested in helping with better bike commute options from the SW to Portland that utilizes Forest Park and can also help with opening Forest Park to legitimate mountainbiking options. Keep on riding!

Congrats Ellen (and Portland’s riding public)!!! – I wish I had known…so I could have said my congrats in person at the Trimet bike parking meeting today.

This is very importnat work to be completed for Portland to reach the next level of bike success (‘world class’, as the ex-Bogeta Mayor said at PSU)!

How radical is Ellen? I once watched her (on her bike) pull over an SUV that had passed her unsafely!

I can’t think of a better person to help move the plan along.

Great news! Ellen is energetic, innovative, and a tremendously effective project manager. She’s a cyclist too, as well as a pedestrian. Good things are on the horizon.

Radical pedestrian? Project manager? Juggler? Architect? Jazz Singer?
Forget about all that – see Ellen for what she really is: a video star!
Check it out:
http://www.youtube.com/watch?v=Y9-1YOBL7HU
(Click on “More from Optionista” to see all 4 videos in the series.)

Opinions Guy, you left out a key element. I should add that in addition to all that, Ellen is an excellent mother!