[Publisher’s note: Elly Blue is on a trip through the East Coast. She’s got a Brompton folder, a backpack, and one of my old cameras around her neck. She’ll be posting dispatches and photos from the road. I’ve created a special section for all the articles and I’ll share some of them here on the Front Page. You can also follow Elly’s adventures on Twitter.] 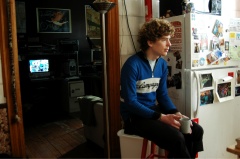 Courtesy of the weather, mechanical delays, a freight derailment in Minnesota, one medical emergency, and the priority of freight over passenger trains, I’m unexpectedly in Chicago for the day.

So here I am sitting in a coffeeshop in Wicker Park, enjoying excellent espresso and fast WiFi. It’s sunny out and “above zero” as my host optimistically put it. Sleet is expected after 5, just when it’s time to head back to the station.

Josh Korby is an old friend of some old friends of mine, who I’d only met once before, and he’s been amazingly hospitable. Despite having a cold, and a full days work messengering in bad weather the next day, he greeted me warmly when I arrived at his apartment at 1am.

On arriving I walked past the kitchen into a room full of computers and rediscovered something I’d somehow forgotten — Josh’s living room doubles as the office of the 4 Star Courier Collective, one of only a few worker owned bike messenger companies in the nation (another is Magpie Messenger Collective in Portland). 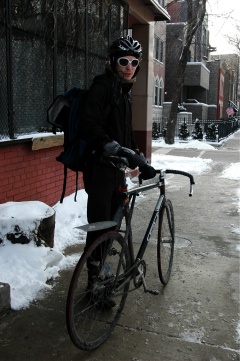 Setting off into the Chicago snow
(Photo © Elly Blue)

4 Star consists of Josh and five other owner/riders, three of whom were part of founding the company three years ago. They all share in all the work, whether riding, or dispatching, or handling accounts. The Chicago Reader published an excellent article a couple years ago about how they got started.

This morning the household woke up around 8, and by 8:30 we were drinking coffee in the kitchen with Rene, another owner/rider. Josh layered up while they discussed the day’s lineup of deliveries, speculated about the weather, and made some plans. The phone started ringing around 9.

The apartment/office is on the second floor of an 1890s building. Dispatching is run off a Mac (“of course,” says Josh), and is presided over by a cat named Diesel, who is the only cat I have ever seen actually fetch something on demand (a shoelace she wanted to play with). A well-cared for fish tank provides soothing background noise, and coffee is always on. Clearly, these guys have their act together.

Somewhere in there we got a chance to chat briefly about bike advocacy in Chicago. Josh says that there are good things happening, thanks to a Mayor who is willing to speak up for bikes, and the Active Transportation Alliance (formerly the Chicagoland Bicycle Federation) which has the clout and the initiative to hold him to his promises.

A problem for biking lately has been that budget cuts at the city have meant a reduction in plowing and salting the roads. It used to be, Josh told me, that riding in the winter in Chicago was no problem because the roads were always clear. This winter it’s been more difficult.

The economy has also taken its toll on business — things have been a little slower, and competition among Chicago’s plethora of messenger companies is getting a lot tighter. Josh isn’t too worried — their main clients are lawyers, who never seem to stop producing documents, and media professionals, who can’t proof their documents properly over email. And 4 Star’s owner/riders have a strong reputation.

One thing they didn’t have, though, was a bike map, which surprised them. “They’re not really that useful you know” Josh said, and gave me verbal directions. And it’s true. Chicago is flat, and it’s a grid. This could be a dream city to bike in — I’ll find out more in a couple hours when I hit the road again with the Brompton.

I have a very good friend who is an owner/rider for 4 Star, Auggie. These guys and ladies are a great crew with a great company. Being a former messenger it’s wonderful to see these people taking their livelyhood into their own hands and creating a positive environment for their workers. I also know most everyone from Magpie and collectively they’re showing workers all over how it can be done. Thanks for this story Elly, too bad you couldn’t make it to the Matchbox, one of the best cocktail bars in the world. Maybe next time.

Elly: Please be alert when you’re riding, especially on streets that have bike lanes. Chicagoans don’t have near the respect for bike lanes Portlanders do, and frequently use them as a passing lane when there’s room to do so. You have to be much more aggressive there (especially if you’re taking the lane, which is REALLY frowned upon).

That having been said, Chicago is a pretty easy to bike, and can be pretty nice, especially along the lake. I’m sure you’ll have a great time.

I second what Case says about Auggie and crew, as I know them also.

I must add there are much more than a few courier owned/operated companies around.

Maybe they are not all called COOP’s, but they are certainly out there.

I’m glad to hear you’re not doing the kind of crashing I pictured when I first read the headline. (Knock on wood.)

Do your Chicago friends have an opinion on the appointment of Illinois’ Ray LaHood as Transportation Secretary?

hey my name is cole and i own http://www.1lesscar.com. if your still sitting in a coffee shop i would love to come say hi.ill bring you some of our socks and what not. let me know if you get this in time im like 10 min bike ride from wicker park. email me cole@1lesscar.com

LaHood is a Rep from Peoria, so chances are not much. LaHood means about as much to Chicagoans as Greg Walden means to Portlanders (probably less, since we only have 5 districts and illinois has 19).

icarus: more than a few courier-owned companies, yes, but of those, only a very few are *worker-owned*, which is a different beast entirely.

besides us at magpie, and the 4 star crew in chicago, theres also cupid in sf (the first of the recent collectives – now almost 10 years old!), pedalers express in santa cruz, pedal express in berkeley, and rock dove, in, believe it or not – detroit. theres probably more, but thats what i know of, and while im not as well-connected as i used to be, i still know a thing or two 🙂

worker-owned messenger companies are far more common in europe, but are catching on here, and im glad to see it.

elly, please give augie, josh, mike and the rest of the gang at 4 star regards from us here at magpie!

No matter what they tell you, chicago is not on the east coast.

Thanks for covering this! It was great to read about my old Chicago friends!