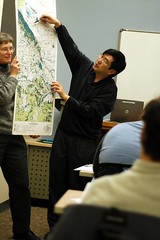 npGreenway is a non-profit group of citizens who are advocating for the trail. Their vision is a new, multi-use path along the Willamette from the Steel Bridge to Kelley Point Park north of St. Johns (read more about npGreenway in, North Portland greenway trail moves toward vision).

Scott Mizee, a core member of the npGreenway group, says having the trail pass as an official part of the River Plan is a “big deal”.

The trail would go
near University of Portland.
(Photo: Scott Mizee)npGreenway

Seven members of npGreenway signed onto a letter the Planning Commission in advance of the hearing. Also included in the letter were letters of support from several agencies and individuals including Multnomah County Commissioner Jeff Cogen, the Swan Island Business Association, and Adidas America (whose headquarters are in North Portland).

The letter stated that the Greenway Trail is a “vital link in the regional trail and transportation system”. They also emphasized to the Commissioners that the trail would have an economic impact on the area:

…The Willamette River Greenway Trail is a piece of infrastructure that will ensure the economic viability of the industrial zoned parcels on the North Portland peninsula connecting residents with jobs on the working waterfront while also affording a connection to the rest of the city.

Mizee says he plans to testify tonight and encourages other to do so as well. “It would be great to have cyclists come out,” he told me this morning, “and voice there opinions about where the trail should be and how important it is to us for transportation — not just a recreational trail with occasional scenic viewpoints.”

Another reason Mizee says the community should do everything it can to support this trail is because of the dire need for a safe north-south commuting route as an alternative to N Greeley Ave. Mizee is among many community members who have voiced concern over the safety issues on Greeley (which includes a very high-speed, freeway on-ramp/bike lane merge).

“Greeley is intimidating and not safe for those that are not “hard core” cyclists. That’s why it is especially important that something be worked out along the river near the Albina Railyards onward to Swan Island.”

If the Planning Commission approves the River Plan, it will most likely also pass a City Council vote. The plan is expected to be on the Council’s agenda this spring.

This would be fantastic. Hopefully the railroads are willing to play ball, because the city has exactly zero authority to make them do anything.

I went last night to the meeting. Was pretty tired (rode into Portland from Tigard), and wasn’t familiar with the proposed trail, so I didn’t say anything… I should have though. They say hindsight is 20/20.

At least there was a bicycle visible there (mine).

This is an excellent plan. I bike to Swan Island every day. Can I tell you how dangerous it is having wrecked on wet RR tracks once a year for the past two years? Even the sidewalks are dangerous with cars and trucks not seeing you. So many more people will bike through there making it less smoggy.

Both RRs, BNSF and UPRR, hate the Trail. U of Portland is lukewarm at best. The community needs to weigh in…comment period has been extended into January…to help the Planning Commission can get their “vision thing” going.

Lenny, I certainly appreciate all the work you are doing as a future NP resident and avid cycle commuter who loves Forest and Kelley Point Parks.

Where do we send our comments? I should have been looking at the NP site, as I had no idea the meeting was taking place until I read the post today.

Of the nearly 800 comments submitted to Metro on the project list for using federal Regional Flexible Funds, more than 25% were in support of the Willamette Greenway Trail project. 1 person questioned the ability to get right of way from the railroad and 1 opposed the project because of greater needs in Clackamas County.

I’m from North Portland, and am excited to see a safe bicycle & pedestrian freeway. I know the fear of shooting Greely to get downtown. Keep me posted.