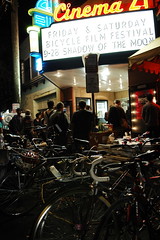 The eighth annual Bicycle Film Festival (not to be confused with the Portland-grown Filmed by Bike fest) is set to return to Portland next week. On the schedule are two full nights of bike-inspired films (five programs total) that will show at Cinema 21 (616 NW 21st Ave) on December 12th and 13th.

Last year, I reported that the turnout for this fest was a bit depressing. For some reason, Portlanders didn’t exactly welcome the fest with open arms (or at least the smallish crowds made it seem that way).

From my quick perusal of the films on the schedule this year, it looks like this is going to be a fantastic offering of cinematic bike love that is definitely worth checking out. In particular is a film about a nearly-blind downhill mountain bike racer (more info and watch trailer below).

Road to Roubaix
USA 2008 | Video 75min.
Dir. David Deal and David Cooper
The film features the most difficult and prestigious one-day cycling race in the world: Paris-Roubaix. First held in 1896, the race is a grueling contest over 160 miles of cobbled farm roads in Northern France with a finish in the historic Roubaix velodrome.

The Way Bobby Sees It
USA 2008 | DV 57min.
Dir. Jason Watkins, Wendy Todd
A gripping story about a blind mountain biker who relies on a “guide” to help him see as he races down one of the most difficult downhill courses in the U.S.

Check out the trailer to this very inspiring film: 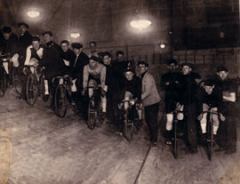 Still from The Six-Day Bicycle Races.

USA 2006 | DV 60min.
Dir. Mark Tyson
Discover the original American form of bicycle racing when the track was king. Traces the history of the forgotten sport from early days in the 1880s through the sad demise in the 1950s. Interviews bring to life the Six-Day Bicycle Race. The film shares the excitement of an era when a bike rider could make in six days what his father might earn in six years.

Lucas Brunelle Worldwide Adventure
USA 2008 | DV 14min.
Dir. Lucas Brunelle
Lucas gives us a look at riding like no one else. London’s underground, the English Countryside, LA’s palm tree lined streets and Tokyo’s freeways are some of the backdrops for alleycats seen through the helmet cam.

Also showing at each screening are a whole slew of fun bike shorts. Tickets are $8 a showing or $29 for a full festival pass. More info and full Portland schedule available at BicycleFilmFestival.com.

— You can read all BikePortland’s previous coverage of the Bicycle Film Festival here.

Most of us just can’t get enough of this gem (with deep meaning and heavy fun) that was the climax of the 2007 Filmed by Bike.

We re-showed it at the Retro fest and a guy in a suit coat and slacks turned to me to say “Is this Ski Boys? God this is good.”

So it’s exciting to see that the boys will be romping in the fields with their antics again at the Bicycle Film Fest when it comes to town. Ski Boys shows at the Friday 9pm showing as part of the shorts program.

Its ok to have bike fun, some think im nuts
but cycling is a culture if you do it long enuff it comes natural and the love sets in. I think when riders start acting like cars issues pop up.. sorry got side tracked. Bobby flim is epic it should
help drive us, not harden us.

Hopefully, It’ll do a lot better this year. Last year, there were a number of competing events (including Cycle Oregon) and the weather was too nice to be indoors. December is the perfect month for something like this, where you’re as inclined to watch bikes as you are to ride them.

Might be the venue. I spend a lot of time between NW and SE, and there are simply a lot more cyclists in SE. If the event was held at the Clinton or Baghdad, a lot of us might be a lot more inclined for the pedal…

Last year I had the opportunity to talk to Brendt Barbur after the show. Apparently, Cinema 21 was the only theater interested in the film festival. I don’t know if the same was true for this year.

we went last night to the shorts film night. the turn out was decent, but the whole experience felt a little, well, thrown together last minute. there were errors in films being set up, it started late and the event organizer got up in front of the crowd and was on the mic WAY too long. it got to a point where the crowd got into heckling, which honestly, made the whole night more fun. i would say next year, hold this at kennedy school and NOT in the dead of december. this festival should be a celebration. it felt to serious and a bit contrived. all in all, it was fun, but i’m not so anxious about it next year, especially after the organize yelled to the crowd, after leaving the stage, “well, it’s not coming back next year to Portland anyway!” wow. way to go. next time have a planned speech with an exit stage right!