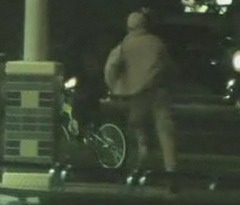 KPTV (FOX in Portland) staged a bike theft sting as part of their “Fox 12 Investigators” series.

The video report includes footage of a bike thief in action on SE Powell Blvd and has an interview with a Portlander (Emily O’Connor) who recently lost her beloved steed.

Their are some classic moments from the thief, who was easily chased down after private investigators (hired by FOX) flattened the tires on the bait bike. At first, he tries to tell a lie about why he hopped on the unlocked bike. Then, after investigators found he was carrying a hatchet (yes, a hatchet), he admitted he stole it.

Turns out he’s an addict and needed some cash (no surprise there).

The story also reports that Portland Police say the number of bike thefts are going down. One of the reasons mentioned is because Portlanders personalize their bikes more than in other places — making them easier to identify and track down.

As for the thief, he tells KPTV that he steals bikes to “open up awareness” and that he’s doing a favor to the community by educating folks on what not to do.

Ummm, yeah. Tell that to the judge.

Check out the entertaining video here.

In other bike theft news, stay tuned to the Front Page for an exclusive, sneak peek at the latest efforts by the Portland Police Bureau to recover stolen bikes.

Jonathan, you need a correction:

The store hired private investigators to monitor the bike, it wasn’t police who chased down the thief.

thanks K’tesh, i’ve made the correction.

Why is it that I have trouble believing that guy when he says he won’t be stealing bikes any more?

Jonathan: And the caption of the photo too.

Slow news day ?
An unlocked bike just placed down on East Powell by effing Fox News. I have real difficulty considering that stealing, sorry.
Stupid scenario that has little to zero bearing on the real bike theft issues.
It’s called entrapment, and if I’m not mistaken, police cannot use that technique.
Are you sure Fox didn’t pay the “theif” ? Whatev’s.

I hear you. I posted this on the Front Page because I thought the video report was interesting and worth watching.

and I think it does touch on some of the bike theft issues this city faces. Mostly, that many thieves are opportunists and are just looking for some quick cash.

it also presents some good advice on how to avoid a similar fate.

Wow, cheesy dialog, just like on the cop shows, too.

Stealing: taking something that isn’t yours. Doesn’t matter if it is secured or not.

RyNO Dan, I suggest you look up the legal definition of entrapment. A person took off on a bike that he knew did not belong to him…that’s stealing.

Leaving a bike unlocked is entrapment?

One interesting bit about this story is that we’re seeing the visibility of cyclists concerns elevated on Foxnews of all places. The story is of the same caliber as your typical TV broadcast. I don’t think it plays up fears or does anything cheeky. It actually mentions using a U-lock which is sound advice.

And BikePortland gets a bit of play on mainstream media.

If our healthcare system actually provided treatment for addicts, instead of simply criminalizing and demonizing them, I’m confident we would see a large decrease in “petty” crimes like bike theft. Similarly, making the minimum wage a real living wage would reduce crimes of desperation. This Fox News “story” on the other hand, is not particularly helpful.

That was NOT entrapment. He chose to take a bike that didn’t belong to him. Nice excuse though, won’t work anywhere.

I wish they would have **Inappropriate comment deleted. Wishing violence on anyone is not accepted on this site — Thanks.** That would have been the patriotic thing to do.

He has probably **Baseless insults are also not cool.** in the past week.

Police use this sort of sting operation in other cities to catch bike theives. They usually use an expensive bike so the charge is grand theft. I am all for it. Anything that stop bike theives is worth it.

I agree with Fredlf too, but I don’t think it excuses the behavior.

I’d like to see more stings done on bikes that are locked with cable locks. It would take alot more time, but I think the guys running around with simple cutting equipment looking for nice bikes to steal are a bigger problem then a junkie who sees a free meal because a bike is completly unlocked

You are right. It was baseless and that man is a great citizen of Portland. I wish him well and I know that he will soon turn his life around.

I forgot that we cannot judge anyone in life simply because they are drug addicts and steal things. The man deserves some dignity.

The thing is, I just don’t like insults like that in the comments on this site… no matter who they’re directed toward.

thanks for your understanding.

I’d agree with Dutch that a more realistic and constructive ‘sting’ would be one where the currently more common form of locking up a bike, the cable, were the barrier that the thief had to violate to steal. Widely publicized stings like this could be very effective in instructing bike owners about the inadvisability of relying on cable locks to secure their bikes.

People that don’t lock their bikes up might as well regard them as a donation to the support of junkie bike thieves everywhere.

I haven’t actually watched the video yet, but relying on the thief’s comments that editor Maus has quoted above, I’ll have to say I’m impressed that the thief would attempt such an argument. I guess that’s what some computer hackers have been able to successfully do.

Maybe he can use this experience to get a job for the city, the PPD, or the BTA, stealing bikes, later be returned to the owner with a message to the owner about the vulnerability of the locking system used.

wsbob #17:
I don’t think any computer hackers have used that argument quite like this guy is. If the hacker broke into a computer to “prove that it could be done,” and then changed the desktop to say, “You need new software on your firewall,” that is one thing, but to do damage once it is clear that it can be done is another…

In other words, moving the bike from one rack to another, and putting a note on the rack/bike saying so, would indeed teach the person that it could be done, (in case the person didn’t know that in the first place) but riding off on it, when it clearly had a flat tire does doing damage to the wheel, (besides the theft issue,) so it would be like hacking into a computer, and then deleting files. That is quite a bit different.

I had a similar thought as wsbob about the guy’s argument in his defense, that it seemed to be a variation of the computer hacker defense. Though as you rightly point out, Matthew, there’s obviously a world of difference. I just think it was funny that he would attempt it, like maybe it was something he had heard along the way, and held onto as a handy excuse to be pulled out in just such a situation. If he had snatched a six-pack, I wonder if he would have claimed to be trying to raise awareness about the inadequacy of the store’s efforts to curb shoplifting.

Matthew…Oh, I agree with you. I don’t think the thief is fooling anybody with that line, but it’s amusing that he’d come up with it given the circumstances.

I’ll bet his having said that though, tells people something they might not have realized about this particular kind of thief; they aren’t all ignorant, out of their mind junkies. Some of these people know what’s going on; the excuses and rationalization bike owners rely on for lazily neglecting proper care of their bikes, thus directly contributing to numbers of bikes stolen.

And in an oddly ironic way, the featured bike thief is absolutely right that his televised act does, or should be doing exactly what he claimed his intent behind it was, even though it’s probably obvious his more immediate intent was to score some dope.

Attempt to think about the situation of unsecured or poorly secured bikes from the vantage point of a thief: All of those bikes…many of them hardly secured, nobody around to observe them. They’re just ripe for the picking. Thievery is a business similar in ways to other businesses, except it’s illegal.

So, the bike thief goes about doing this, cool, nonchalantly, sloppily, as if it were any other regular, even boring job. He’s so relaxed, he’s able to come up with snappy, philosophical repartee when busted.

I wish the PPB would do this on a regular basis.

Lots of those guys carry hatchets and the like around. When you are starving you do what you have to do, whether it’s a too tame squirrel or someones pet dog or cat.

I’m not entirely sure our resources should go to sting operations for bike thieves; we should know better than to leave a ride sitting unlocked for any period of time. You wouldn’t run into the Kwik-E-Mart and leave your car running unattended out front, would you? I like that this business took it upon themselves to hire PIs and get the message out that theft won’t be tolerated there, though.

I also like that we don’t have to worry about this guy stealing bikes any more either – cuz, you know, he signed a statement… 🙂

Since the thief was so arrogant, it may have been useful to have asked him how long it takes to chop through different types of locks with that hatchet and what types of locks he has successfully used it on. He would likely have been proud to divulge that information.

Don’t just use one lock, even if it’s a U-lock, unless you want to take your wheels off every time you lock up. Use several locks, include a thick chain, make it harder for them. The more time they have to spend on it the more likely they will be caught and the more likely they’ll leave your bike alone.

It was a little disappointing to see the story end with no involvement by the police, despite the fact that he was carrying a concealed HATCHET. That particular bike thief is probably still plying his trade on SE Powell today.

I didn’t understand what the point of the “sting” was, if there were to be no consequences for stealing that particular bike. Guess the point was just to get the tape for the 10-o-clock news.

Thanks prop 57! Now we can catch all these bike thiefs who are drug addicts, lock them up and “reform” them like prop 57 explains. Yippee bike thieves caught meanwhile funding for education, healthcare, and infrastructure will soon feel the strain! Glad Fox 12 is setting up these stings because then we can tax the system even more! Fox12 NOT on the taxpayers side!