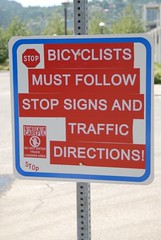 The stop sign at SE Caruthers and
Water has been a source of
frustration for many.
(Photo © J. Maus)

Two stop signs at the intersection of SE Water Ave and SE Caruthers St. in Southeast Portland (map) will be removed by PDOT.

The news comes from an employee of the nearby Oregon Museum of Science and Industry (OMSI). The employee sent BikePortland a letter received from City Traffic Engineer Rob Burchfield outlining the changes (download PDF of letter here). In the letter (dated today, 11/25), Burchfield writes that since the stop signs were installed in 2002 (under transportation commissioner Jim Francesconi), “PDOT has received numerous complaints from the public about this intersection.” He goes on to write:

Here’s an aerial view of the intersection (stop signs that will be removed are colored red): 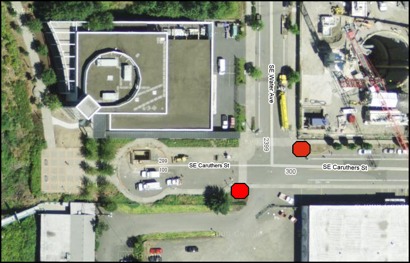 (Link to intersection on Google Maps)

“The non-compliance of the stop signs has not translated into any crash activity.”
— City Traffic Engineer Rob Burchfield

Buchfield also notes in the letter that PDOT investigated conditions at the location and found the concerns to be valid. Their investigation — which included video monitoring — found there to be a “high level of non-compliance” at the stop signs but that the non-compliance “has not translated into any crash activity”.

According to the letter, PDOT has not recorded any crash activity at the location for the last 15 years.

This is welcome news. These stop signs have caused frustration for many people in the community. Back in July, we reported that a construction crew working on a project at the intersection was so fed up with people on bikes not stopping that they installed their own sign to deal with the problem (it was later removed by PDOT).

In addition to removing the stop signs on SE Caruthers, PDOT plans to install new bike lane striping through the intersection to increase awareness of westbound bike traffic, a new warning sign on Water that points out that cross traffic does not stop, and a new warning sign for right-turning vehicles to yield to bicycles traveling in the bike lane.

Good! I’ve never seen such a high level of non-compliance as at those signs. Why? Because there’s hardly any traffic to yield to coming off Water Ave!

I agree there’s a safety concern due to heavy truck traffic in the area, but the correct solution is to put a stop sign on Water “Avenue” (which at this intersection is really just a dead-end parking lot on each side of Carruthers, producing very little traffic volume) and allow bikes on Carruthers to roll through.

YES! That is fantastic news, and it’s about time. That’s how PDOT is supposed to work – when there’s a problem with the existing intersection, you analyze it and correct it. Awesome!

Sweet! Finally! Now when are they gonna take out the stop signs at Ladds Circle?

Wow! Finally, somebody realized that a case of non-compliance can be solved by removing an unnecessary control, and not increasing enforcement. It took a lot of smarts; let’s hope that the usual suspects on this blog can admit that they were wrong in this case.

So do the bicyclists who got tickets at the intersection get their money back?!?

This does indeed seem to be a case of government working. Wow. And it shows that the Idaho stop-as-yield law can work without necessarily creating safety problems.

As for “the usual suspects” admitting that they were wrong in this case, what have you been smoking peejay?

Cool! Now let’s get rid of the superfluous STOP signs in the traffic circle in Ladd’s Addition!

Wow! that is great news! A true holiday gift for cyclists who commute via this route!

Since moving here from Philadelphia, I am blown away by the type of responsiveness Portlanders receive from PDOT. They respond in months, not decades! I’ve seen more infrastructure improvements in this city in the last 6 months than I did in my entire 4 years in Philly. Way to elect officials who establish a culture of accountability and hire people who believe the same!!

Steve, despite your really unfortunate handle (that’s an inside Bikeportland joke), your website rocks! Welcome to Portland man, you’re gonna love it here.

It’s a very important day when government realizes it doesn’t need to be involved in your life and extricates itself. That doesn’t happen very often. (Ever.)

maybe just a yeild sign would be good. That way a certain amount of responsability is still there

What I’ve been smoking is my business! But yes, it may be too much to ask that the “What part of STOP don’t you understand?” crowd might not admit how silly their crusade of absolute lemming-like adherence to all traffic controls, no matter how ill-conceived, really is.

On a side note, I was in an unnamed foreign country recently, and made special note of the almost complete absence of stop signs and traffic lights. Yet, it was utterly logical and obvious how one should behave at all crossings, and I never once saw broken taillight glass* on the road. Oh, to be as evolved as they are!

*My new number one crash indicator. Odds are, you’re not going to witness too many crashes, but evidence of them remains for weeks after the fact, if you look. I postulate that the more signs, lighted signals, and lane markings an intersection has, the more likely one is to find the telltale spray of ground red, yellow, or white glass scattered at various impact zones throughout that intersection. And where cars smash into cars, they’re likely to smash into bikes, too.

jim (#14) – that intersection is a “T” intersection. In the absence of signage, the Water Avenue traffic should be stopping anyway, as should any vehicles leaving the driveway from Wayne Kingsley’s property. Since there will still be a stop sign on Water, and driveway traffic is required by law to stop before entering the roadway, no yield sign is necessary.

Which reminds me – will someone please tell Ross Island Sand & Gravel that their truck drivers are required BY LAW to stop before leaving their driveway and pulling out onto SE 4th Avenue? (and across the entrance to the Springwater Trail)

“Sweet! Finally! Now when are they gonna take out the stop signs at Ladds Circle?”

I had the same thought, though I was picturing fancy new yield signs in their place. Not sure if that’s what you had in mind…

How much crash activity has there been in Ladd’s, I wonder?

“Wow! Finally, somebody realized that a case of non-compliance can be solved by removing an unnecessary control, and not increasing enforcement.”

Yeah, I find it really promising to see the city deal with non-compliance in some way other than police stings and $242 tickets, and that common sense seems to have won out over what otherwise would have likely been some kind of “tough on crime” stance.

It’s interesting that non-compliance by road-users – many of whom I bet would be considered safe drivers and cyclists by any measure – was one way that the public pushed back, and, however unintentionally, showed just how little need there was for a stop sign right there.

It reminds me of the way that even safety-minded cyclists learn that, as they approach an intersection, they can look left, look right, and left again, thus pretty much achieving full situational awareness without having to abandon their forward momentum. Leading them to question the validity of full-stops for cyclists.

On a side note, I was in an unnamed foreign country recently, and made special note of the almost complete absence of stop signs and traffic lights. Yet, it was utterly logical and obvious how one should behave at all crossings, and I never once saw broken taillight glass* on the road. Oh, to be as evolved as they are!

That makes me think of this video of traffic in India, (which I feel like I must have posted here at least once before, but it stands up to multiple viewings):

Yield signs at Ladds would be nice. One of the things I learned when I took the Portland Traffic and Transportation class at PSU a few years ago (highly recommended for all citizens, by the way) is that roundabouts work better when they have yield signs at the entrance, not stop signs. They work better for cars that way, too.

Not only yield signs improve the Ladd Circle experience, they would drastically improve the (automobile) flow at the 39th/Glisan roundabout, reducing the queues that often block the bike boulevard crossing just to the south.

If I had received one of the tickets at this location in the last year, I would use this new information as grounds for a nice harassment suit against PPB.

I never use the bike lane on the south side of Caruthers at this location, too many cars and truck pulling in and out of the millwork facility there, plus I’ve seen cyclists go down here when they hit the 1″-2″ lip separating the asphalt from the millworks driveway/sidewalk. In fact I’m not sure why there is a bike lane here at all, the traffic volumes and speed sure don’t seem high enough to require it.

Ladd Circle requires changing the entry angle for each of the roads entering the circle before putting up yield signs.

The entry road can’t approach perpendicular to the center of the circle. That leaves open the possibility of T-Bone accidents.

The entry roads have to be adjusted to an oblique angle. This means lots of money, and PDOT is doing other things right now.

BURR (#22) – I don’t know why either, especially since trucks at Millwork park across the bike lane ALL THE TIME.

It would be wonderful if we had the connector trail that we’re supposed to have, but I don’t see it happening anytime soon, with Wayne Kingsley adamantly against it and Ross Island Sand & Gravel’s Ready-Mix plant square in the way.

I see no benifit to Ladd circle having a yeild sign instead of a stop sign. Traffic moves through there very quickly as it is. I know it takes a little more steam if you have to bring a bike to a comp;ete stop, but that is what it is….

Keep dreaming about Ladd circle. In the USA, traffic circles get stop signs.

and quit trying to put traffic circles in interstctions that are too small for them. that makes it too dangerous for bike and pedestrians, especially when the car comes within inches of the sidewalk just to get around the thing.
also center aislands like the one at Killingsworth and Concord (bad engineering design)

I guess Massachusetts is not part of the United States, Suburban, because all of the “rotaries” have yield signs. California must not be either. I haven’t driven that much anywhere else, so unlike you I won’t make a sweeping generalization about the rest of the country.

Suburban, you apparently haven’t visited either Lacey, WA or Bend, OR lately.

The signs are gone!

It’s true. And it only took a little over 4 months to unbolt the two signs! Amazing efficiency. Continuing the dashed bike lane through the intersection is a nice touch as well.